Leopards return to the scene of their 2-1 defeat against Western Stima when this time they take on Muhoroni Youth at Afraha Stadium, Nakuru.

MichezoAfrika followed the Leopards even at training:-

AFC Leopards held a light training session on Saturday afternoon at the Afraha Stadium in Nakuru, the venue of their next league match against Muhoroni Youth, set to be played on Sunday afternoon.

AFC Leopards who come off from three league losses in a row will be looking for maximum points against the relegation threatened Muhoroni Youth as they aim at toppling Gor Mahia in second position.

AFCLeopards drove into the Afraha Stadium in their newly acquired bus "The Monster”  and the players were in high spirits during the  training. 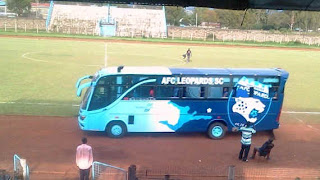 A win for Jan Koops’ side will see them gain to 48 points, same as Tusker but with an inferior goal difference. If Tusker loses against Thika Unitedon Sunday, then AFC Leopards will stand a chance of taking the battle down to the wire.

The other title chasers Gor Mahia will be playing Rangers FC on Wednesday.

Muhoroni Youth coach Alfred Imonje says he is confident that his side can surprise AFC Leopards.

The Tusker Premier League new boys are slowly edging away from the relegation places having stuck in the lower reaches of the standings for a long time.

They will attempt to continue the good run with a win over AFC Leopards at the Afraha Stadium in Nakuru this afternoon (Sunday 30 September 2012), a feat that Imonje feels is achievable.

"We have prepared well and are ready for the game. Our situation is not good because we are among the teams at the bottom of the standings and we need to get points very soon. This is a good opportunity for us to do so and hopefully my players will seize it", he told Futaa.com.

The match will kick off at 1500 hrs local time.

AFC leopards will be out to redeem their faces when they face off with Muhoroni Youth at Nakuru’s Afraha Stadium this afternoon. After seeing his side train at the ground on Saturday evening, Coach Jan Koops is confident his boys can bag the three points.

“We have trained very well in the last week and the concentration on the game has been very high. At this juncture no one can afford to lose even a bit of concentration. We are still firmly in this race and that means in the five remaining matches, the only vocabulary we ought to know is win.” Coach Koops told michezoafrika.com at the Afraha Stadium on Saturday evening.

The Coach Says that they have put behind them their woeful past vowing to add three points to their tally, promising not to take Muhoroni Youth for granted.

“Of course they are a good team and we have to give respect to them. They won massively last weekend and being a team fighting relegation, it will be a very interesting match. They are six points ahead of the bottom two and one can say they are practically out of relegation. However, they still want to prove something as well as climb higher and winning against Leopards will be a big plus for them. We don’t expect it easy,” adds Koops.