Leopards kept the pressure on the title race with a 3-1 win away win in Naivasha. 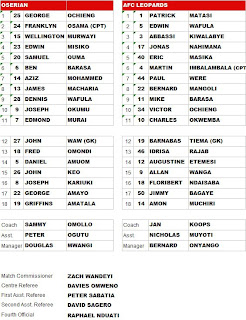 AFC Leopards temporarily leapfrogged Gor Mahia into the second place in the Tusker Premier League with a 1-3 win over relegation threatened Oserian, on Saturday 27 October, at Oserian Sports Complex.

The exciting game started at a high tempo with both teams making numerous raids.

It took 15 minutes before either team’s register a score. Ben Barasa struck home in the 8th minute to put the Flower-men ahead, but their celebrations were cut-short with Mike Barasa’s brilliant equalizer in the 12th minute.

Two minutes later, Bernard Mang'oli doubled the lead with a sterling free-kick before the hosts were reduced to ten-men, following the dismissal of skipper Franklin Osama for a second bookable offense in the 47th minute.

Leopards are now level on points [54] with league leaders Tusker, but edged out on goal superiority.
The Brewers are scheduled to clash against third-placed Gor Mahia on Sunday 28 October, in what has been billed as a title decider.
MichezoAfrika reported:-

AFC Leopards claimed second spot in the Tusker Premier League after a 3-1 win over relegation threatened Oserian FC at Naivasha on Sunday afternoon to pile pressure on Tusker and Gor Mahia who meet on Sunday in a potential title decider.

AFC Leopards took less than 40 seconds to announce their intention. Jonas Nahimana's great header from a corner missed the target by inches.

Oserian replied immediately through Edmund Murai whose free kick was punched out by Matasi for a non-resultant corner. Matasi was called to task again to block Dennis Wafula’s cross a minute later.

The hosts took the lead through former Ingwe man Ben Barasa  whose shot evaded Nahimana and Matasi in the 9th minute.

Three minutes later it was another Barasa affair. A good build up involving Paul Were and Victor Ochieng found Mike Barasa who wasted no time beating keeper George Ochieng to level the score line.

In the 15th minute AFC Leopards won a free kick that Benard Mangoli successfully converted to give them the lead.

Paul Were’s good dribbling on his was to Oserian box needed intervention and captain Frankyln Osama responded to earn himself a yellow card and gift AFC a free kick that went to waste.

Six minutes to the break, Mike Barasa’s nice pass to Okwemba ended in a corner that was quickly cleared and allowed Oserian break on the counter but keeper Matasi blocked the effort.

Okwemba would have grabbed a brace in the last minute of the first period but a fingertip save by keeper Ochieng stood in his way.

At the second half kick-off Oserian coach Pamzo Omollo threw in John Keo in place of Aziz Mohammed. However, the going got tough for his side when captain Franklyn Osama was set for an early shower after collecting a second yellow. Joseph Okumu was pulled off for Fred Omondi whose role was to seal the void left by Osama.

The evergreen Paul Were was denied by the cross bar in the 57th minute with Oserian keeper well beaten.

In the last quarter of the game, Coach Jans Koops brought in Allan Wanga for Victor Ochieng to add spice to his striking force. Floribert Ndayisaba replaced Martin Imbalambala.

Charles Okwemba 84th minute freekick was saved on the line but he redeemed himself seconds later after capitalizing on keeper Ochieng’s blunder to make it 3-1.

Jonas Nahimana’s back pass almost resulted in a second goal for Oserian. Dennis Wafula rounded keeper Matasi but Nahimana recovered to block his shot aimed at the empty net.
AFC Leopards’ next match is against Mathare United before they end up their campaign away to Chemelil. They will be keenly watching the proceedings between Gor Mahia and Tusker on Sunday hoping for a draw.AFC Leopards has 54 points,same as Tusker who have a superior gaol difference while Gor Mahia has 52 points.

Oserian will visit Sony Sugar next before their last match against fellow strugglers Rangers FC.

AFC Leopards put in a disciplined, battling performance to wear down a determined Oserian side.

The opening minutes were electrifying. Inside the first minute, Leopards’ Rwanda defender Jonas Nahimana, almost scored with a glancing header from a corner ball went just above the bar.

Then Oserian laid siege on Leopards until they scored in the eighth minute when Ben Baraza fired in from inside the box. After an Oserian corner was headed in, blocked and then the ball finally fell to Baraza, he blasted in past Patrick Matasi.

The goal was actually coming. In the fourth and fifth minutes, Leopards had survived when Matasi parried away goal-bound shots.

The first was when Wellington Murwayi struck a 30-metre free kick to Matasi’s left. The Leopards’ keeper clumsily reached the ball with the tips of his fingers and he barely pushed it round the far post. In the next minute Dennis Wafula bombarded Matasi who desperately managed to block that shot before the ball was scrambled away.

At the juncture when Oserian took the lead, they appeared good enough for victory on the day. It would have been only their 12th win of the season and one signalling hopes of survival in the Premier League. At the time, there was real hope that they could go on to overhaul the 14th placed Muhoroni in the final two matches of the season.

But an unbelievably lively Leopards’ team showing no pressure at all after falling behind, regrouped to take the battle to Oserian.

A number of attacking runs culminated with Paul Were teeing up Mike Baraza at the middle of the top of the box and the veteran unleashed his right foot to fire from 20 metres in the 12th minute. A diving George Ochieng’ in the Oserian goal helplessly saw the ball zoom under his chest as he dived to the right far post.

A bit of the Oserian self belief the appeared to have been sapped from the players after Leopards took the lead in the 15th minute.

From a free kick award 22 metres out on the left flank, Bernard Mang’oli powerfully and accurately slipped the ball past Ochieng’ on the near post.

From a 29th minute Leopards’ corner, Mike Baraza should have had his second goal with a header off a corner. His team’s dead ball delivery was really proving very good.

In the 45th minute Charles Okwemba’s rising shot was dipping into goal when Ochieng’ tipped it over the bar.

Disaster struck Oserian two minutes after the change of ends when their skipper Franklyn Osama, on a yellow card in the first half for a reckless tackle, stupidly repeated the same offence and a second yellow translated in a send-off.

From then on Oserian’s struggle became severe under the Leopards onslaught.

Oserian conceded an 85th minute corner and Leopards played it short before the final ball to ‘keeper Ochieng’ who defended it at the near post on the right. But parrying the ball rather than holding it allowed it to drop on the legs of Charles Okwemba who lifted it high into the top corner of the net for a 3-1 score line denoting an emphatic victory.

It was a thrilling end to an entertaining match under a carnival atmosphere. Hordes of Leopards’ fans from around the country had made their way to Naivasha and what enjoyment did they experience.

Rain had preceded the 2pm kick-off Karuturi Sports v Nairobi City Stars match at the same venue. But good conditions returned after half time. The 4pm match was played under a warm sun and on a nicely watered soft pitch.

Coach Sammy Omollo of Oserian said his team would not give up the fight to survive, adding: “I think we played well. The turning point was Osama’s send-off. It was unnecessary. He should not have gone for the tackle after the Leopards player had already won the ball.

“But this [relegation battle] is not over. We shall fight till the last day. We are proud of what we are doing.”

Jan Koops of AFC Leopards said the focus was to win all their matches and see what happens. “Only WE can do anything about our destiny. I say, we win our matches, and then see what happens.” 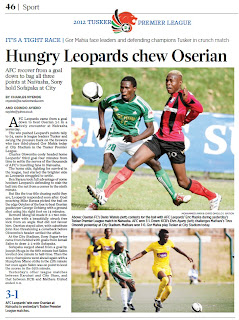 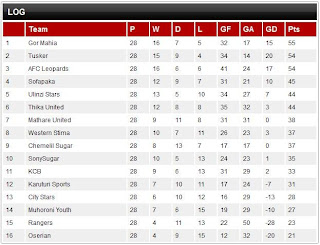 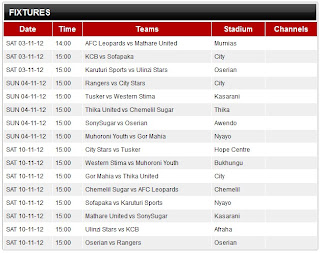