Leopards dropped two crucial points against Rangers after being held to a barren draw.

After the barren draw at the Nyayo National Stadium on Thursday afternoon, Rangers would go home the happier side though alittle disappointed that they could not use the many chances they had on their sleeves.

For a team struggling at the bottom of the table, James Nandwa’s side showed the resilience they need to earn a point against the table topping Leopards. Jan Koops’ charges needed to extend their lead at the apex to get off the chasing pack of Tusker, Ulinzi Stars and Thika United.

The Leopards had the early chances of the first half, Jonas Nahimana hitting the side netting from a freekick while Floribert Ndayisaba shot wide from a good angle.

The second half was more active as both teams increased their attacks. Rangers were more colourful upfront with Erick Muranda and Edwin Ombasa being most creative.

Leopards were almost 1-0 up with nine minutes played in the second half but thanks to Victor Omondi’s acrobatic turn, Rangers kept afloat. Edgar Waudo almost scored an own goal with a header, trying to defend Oscar Kadenge’s cross from the right. Allan Wanga blasted the rebound on Tom Onyango’s ches.

Rangers had a chance with 59 minutes played. Erick Ochieng struck a fierce freekick from 30 yards out, keeper Patrick Matasi failing to hold on to the ball. Erick Muranda blasted the rebound over the bar. Five minutes later, Ochieng’ was once again haunting the Ingwe backline. 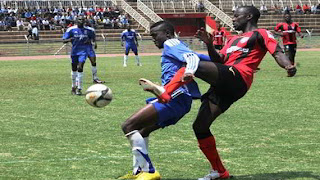 The former Karuturi striker blasted tha ball way over the bar after beating the offside trap from a clever Erick Muranda ball. Sensing that they needed a win, Coach Koops decided to throw in his first sub, pulling out a defender, Idrissa Rajab for Jimmy Bagaye. Jonas Nahimana then pulled off to left back with the central defense being made up of Imbalambala and Masika.

Allan Wanga then hit the ball out with the 68th minute from a Benard Mang’oli cross.
Rangers went on with their attacks seeking to find that goal. Leopards too pushed hard and as the game progressed, frustrations started creeping in. Erick Masika was yellow carded after an outburst with the referee who had given Rangers a freekick he thought they did not deserve.

Just a minute later, Leopards were screaming again at the referee after he failed to award what looked like a penalty after a goal mouth melee from a corner.

Laurent Tumba had a shot go wide in the 85th minute with his second touch of the ball after coming on for Mike Barasa.

Rangers would almost snatch victory at the death but keeper Matasi made a wonderful save from a Tony Onyango header.

Julius Owino yellowcarded
67'     Muranda finds Eric Ochieng with a great pass. Ochieng finds himself in a one-on-one  situation with Matasi but shoots wide
64'     Mangoli gets a shot from 25 metres but shoots over the bar. The match is now opening up
62'     Rangers' Tony Onyango shoots a free-kick goalwards and Matasi fails to catch it properly. Muranda finds the rebound but he shoots wide
58'

Edward Waudo Yellow-carded
49'    Mang'oli with a nice shot on the edge of the box, but shoots wide
46'    Wanga has a chance within the box but his shot volleys over the bar
45'    Half-Time
43'   Imbalambala heads the ball over the bar after finding a free-kick taken by Mike Baraza
39'   Kadenge also penalized for a foul throw
38'  Imbalambala penalized for a foul throw
37'  Eric Muranda gets a shot outside the box but it is deflected by Nahimana before Matasi pounces on it.
28'  Oscar Kadenge receives a great pass from Wanga but fails to convert it, shooting it to keeper Victor Omondi's hands
27'  Baldwin Ngwa tries to make a cross into AFC's box but Matasi marks it
26'  Imbalambala with a great chance to shot outside the box but hits the ball wide
23'  Rangers getting into the match, pushing AFC's defense back
19'  Rangers' Eric Muranda comes close to scoring but his shot goes over the bar
10' Wanga shoots an awarded free-kick directly into the wall
1'   Match is on
Starting XI: Victor Omondi[GK], Emmanuel Chimaroke, Julius Owino, Edwin Oudo, Tom Onyango, Thomas Biketi, Patrick Macharia, Edward Ombasa, Eric Muranda, Eric Ochieng , Baldwin Ngwa Substitutes: Raphael Omondi [GK], Tony Onyango, Michel Ochieng, Tyron Owino, Alfred Chege, David Kataka, Evans Ogutu
MichezoAfrika also additionally reported the post game events:- 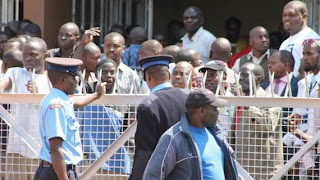 Are we getting back to the old soccer dark age? AFC Leopards fans held hostage the match officials after their barren draw against Rangers at the Nyayo National Stadium accusing them of bias. Centre referee Richard Obare was the subject of controversy as it was also alleged that he was involved in a verbal ultercation with Leopards defender Erick Masika.

Angry fans bayed for the officials’ blood as they barricaded the exit, while a few of them started throwing objects into the pitch.

Police had to quickly swing into action and they threatened to hurl teargas canisters but a concerted effort from a few AFC Leopards officials and a reknowned journalist prevented them.

After consultations, the officials safely exited through Gate six but a few fans enraged fans followed them to the the other side,leaving the police with no option but to use teargas to disperse the them.

After their 0-0 draw with Rangers, AFC Leopards’ fans expressed their disappointment with the day’s officiating, and proceeded to block the referee and his assistants from exiting the pitch.

It took the intervention of police, who had to lob tear-gas canisters at the now rowdy fans, to allow the officials sneak out through Gate Six, which is directly below the Russia terraces.

The match was played at the Nyayo Stadium, on Thursday 9 August, starting 1200hrs.

Not surprisingly, Rangers were composed and committed as they held a frustrated AFC
Leopards to a 0-0 draw on Thursday at the National Stadium.

Typical of struggling teams in the Kenyan Premier League, which never stop sniping at the big guns, lowly Rangers were no different against Leopards who are perched at the top of the table.

The match was unplayable on Wednesday night due to torrential rains before it could start. After the rescheduled mid-day kick off on Thursday, it was Rangers, just one place off the bottom of the table, who clearly looked more industrious.

Rangers calmly dealt with Leopards’ early attacks and when they kept off the dangers posed by Jonas Nahimana, [free kick] new man Floribert Ndayisaba [shot just wide] Oscar Kadenge, Martin Imbalambala and Allan Wanga, they were not a team overawed at all by their more illustrious opponents. In fact Eric Muranda and Baldwin Ngwa had close chances in front of the Leopards goal inside the opening 25 minutes.

Rangers threatened in the 62nd minute, Tony Onyango’s free-kick troubling Patrick Matasi in the Leopards goal and from the re-bound Muranda should have done better than going wide.

Eric Ochieng’ then broke through five minutes later and with only Matasi to beat placed the ball wide. Scenes at the end of the match depicted a Leopards following that did not expect anything like the stiff competition they got from Rangers.

Some Leopards’ supporters blamed referee Richard Obare for bias and attempted to manhandle him at the end of the match. Police had to intervene.

League action continues on Friday, KCB and Chemelil meeting at the City Stadium to usher in the weekend programme. Other highlights include Leopards playing Thika United at the National Stadium on Sunday and Gor Mahia going to the International Sports Centre, Kasarani on Monday evening to face Sofapaka. 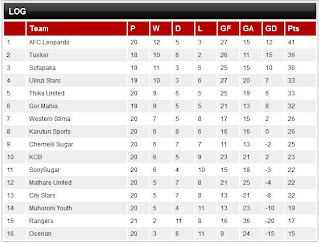