Leopards lost 0-2 to KCB at the Nyayo National Stadium. 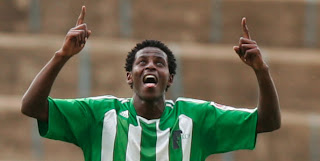 AFC Leopards’ title ambitions suffered a major blow on Sunday when they crashed 2-0 to Kenya Commercial Bank at the Nyayo National Stadium.


Leopards had come into the game confident, with no loss in the second leg of the season but they were shocked by the bankers who are fighting relegation.


At 44 points, a win would have elevated Ingwe to higher levels, but while the fans were expecting a win, the players were not up to the task.


A defeat for Ingwe was well-deserved, they neither showed urgency, thirst nor interest in the game and when they lost, they had no answers.
The defeat seriously dented Leopards’ title ambitions and even despite the fact they remain at the top of the table, it will give the other contenders some hope.
Thika United won 1-0 against Karuturi Sports, Sofapaka got a point in their draw with Chemelil on Saturday and Gor Mahia also earned a point against Mathare United on Friday.
Other title contenders Tusker and Ulinzi Stars play on Monday evening and the two teams need just a draw to help either close the gap on Leopards.

Peter Wainaina put the bankers ahead in the third minute after Clifford Alwanga set him up with a header, off a Patrick Matasi rebound following an initial Wainaina strike.


In the 42nd minute, Mungai Kiongera, KCB’s current top-scorer outran AFC defenders, at the same time avoiding an offside call, before releasing a powerful shot which landed in the net behind Matasi.
Leopards tried their best but in was not good enough and coach Jan Koops conceded defeat.
“KCB played very well and they deserved to win,” said Koops. “We were not in our best concentration in the first half, and KCB took advantage of this to score the goals.
“Seeing that we are still in the race for the title, we shall correct where we went wrong before we play our next match.”
Supersport reported:-

Goals by Peter Wainaina and Paul Kiongera handed KCB a 2-0 win over AFC Leopards in a match played on Sunday at Nyayo National Stadium.

Wainaina, a former AFC player, gave KCB an early advantage in the fifth minute, after connecting with an pass flying in from deep. His first attempt at goal was punched back into play by keeper Patrick Matasi.

Clifford Alwanga ran for the ball, heading it back to Wainaina who wasted no time converting.

Leopards’ best chance at goal in the first-half came in the 21st minute, with Paul Were getting the ball on the left of the area but his shot was tapped back by keeper Adola.

On 23 minutes, Mike Barasa had another chance but Adola kept his shot out at the near post.

In the 42nd minute, Kiongera spun past Jonas Nahimana to collect a Brian Osumba pass and beat Matasi to make it 2-0 and stun the home crowd.

Leopards started the second half well, camping in the KCB box for the first ten minutes. However, their numerous attempts were neutralised by keeper Adola and his defenders.

KCB almost scored in the 66th minute, after Kiongera and Elvis Ayany – who had come in as a substitute for Geoffrey Maina – broke down the AFC defence but the final shot by Kiongera failed to trouble the goalkeeper.

Barasa went close in added time but Adola again kept him out.

With three points in the bank, KCB have moved from 12th to ninth on the Kenyan Premier League table, while AFC are still perched at the top.
Futaa writes:-

The Kenyan Premier League match between AFC Leopards and KCB ended on a 2-0 scoreline in favour of the bankers.

Peter Wainaina set KCB on the way to a win with his fifth minute goal, after Clifford Alwanga set him up with a header, off a Patrick Matasi rebound following an initial Wainaina strike.

In the 42nd minute, Mungai Kiongera, KCB’s current top-scorer outran AFC defenders, at the same time avoiding an offside call, before releasing a powerful shot which landed in the net behind Matasi.

The teams went into the half-time break with KCB bearing a two-goal advantage.


Two minutes into the second half, AFC’s Paul Were made a run on the left with ball and shot into the box but keeper Adola punched it back into play, just in the nick of time.

AFC continued mounting pressure on the KCB but the latter settled into the match, eventually taking control of the match, with the ball-possession by the 56th minute reading 56%-44% in favour of the bankers. 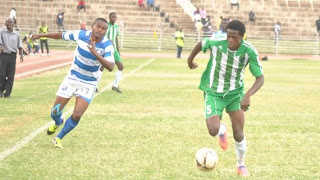 Kenya Commercial Bank registered a 2-0 victory over table toppers AFC Leopards at the Nyayo National Stadiu on Sunday afternoon. Peter Wainaina and Mungai Kiongera scored in the first half as KCb registered a relief win over the Leopards.

Ingwe would have gone eight points clear at the top after Sofapaka fumbled against Chemelil, but they threw away their golden advantage and will now have to increase their work rate in the remaining matches.

The bankers showed early intent for a win and in the fifth minute, Wainaina opened their account with a volley inside the box. His initial shot was saved by Patrick Matasi. Clifford Alwanga headed back the rebound and Wainaina did justice by slamming the ball home.

Leopards had their first chance in the 21st minute but Were was shielded away infront of goal after he beautifully chested down a cross from Edwin Baraza. Three minutes later, Mike Barasa slammed a shot from the left from Edwin Wafula’s cross but Kaleb Adol;a was equal to the task saving away the ball.

The Bankers would then double their advantage two minutes to the break through Mungai. The Under 23 striker finished off Brian Osumba’s pass after he lobbed the ball over the Ingwe defense.

Leopards would come back in the second half determined to stage a comeback. Jimmy Bagaye came in for Victor Ochieng’ and Floribert Ndayisaba paved way for Laurent Tumba. The changes however did not make any difference as KCB defended well to ensure they cushioned their advantage.

Leopards were forced to make a sub after Bernard Mang’oli was stretchered off injured and in came Amon Muchiri. They upped their pressure. Leopards though they had grabbed one back when Jonas Nahimana headed in but Mike Barasa had headed the initial ball back to play from out.

Edwin Wafula had a shot saved by Adola in the 93rd minute as Ingwe sought hard for a goal. KCB now jump to 9th after the win while Leopards are still keeping a five point gap.

AFC Leopard’s title hopes were jolted after they fell 2-0 to KCB at the Nyayo National Stadium on Sunday.

Peter Wainaina and Paul Kiongora scored a goal each for the bankers to guarantee them three vital points, which saw them jump to the ninth position on the log.

Wainaina scored in the fifth minute after Patrick Matasi had failed to hold onto a Clifford Alwanga header.


Then Kiogora who was named man of the match was on the mark three minutes to the break.

It was a result that gave KCB coach James Omondi the confidence to announce that they have finally put behind them a bad stretch of results. “I am extremely delighted by this result. Considering that I am just beginning my coaching career, I cannot afford to post poor results because it may mean only one thing — a sack

“But with this result I can confidently say that we are back and the poor results are finally behind us,” he said.


Omondi paid glowing tribute to Kiongora who was coming back to the team after a six-week absence.

“He is the soul of the team and without him it has been difficult to win matches,” he said.

On the other side, Leopards’ fans will be extremely disappointed by the manner in which their team lost.

Coming into this match on the back of a 5-0 win over Thika United, the Kenyan Premier League (KPL) leaders lacked the fighting spirit of potential champions and did not make any attempt worth writing home about.

Coach Jaan Koop aptly captured the feelings of many fans after the match: “I told my players before the match that if they do not create chances and fight for a win they would lose today and it happened.”

Koops, however, said the loss does not kill their title ambitions and will seek to bounce back against champions Tusker on Friday.

Tusker who play Ulinzi on Monday would narrow the gap to just two points if they beat the soldiers and they still have played one match less. It is a situation that puts Leopards under renewed pressure to maintain their grip at the top.

THEY never respect lessons learnt in the Kenyan Premier League, do they; that there is only so much the whipping boys are prepared to take? This time, leaders AFC Leopards apparently took no heed and were embarrassed in a 2-0 defeat by lowly KCB at the National Stadium on Sunday.

Can any of the so-called “big teams” make a real impression and consistently dominate in the Premiership? If Leopards, amid the pride of being unbeaten stretching back to May 16, could not shrug off KCB, surely no one can.

It’s, therefore, back to the normalcy in the Premiership that you can neither pay too much respect to those in the lead, nor show contempt for those in the lower rung.

Former Leopards skipper Peter Mwangi Wainaina and Mungai Kiongera had KCB up 2-0 at half time, and for many of Leopards fans, in utter disbelieve and dismay, there was a sickly feeling the rest of the match that their team would not come back. It did not.

In the opening skirmishes it was Leopards who made the forays, a returning Paul Were being full of flight up front and took a bit of muscle to stop in the second minute.

Defender Jonas Nahimana was to use the long ball to find Mike Baraza but the veteran just came short of reaching the excellent opportunity.

Then with a burst of confidence, KCB fired the first salvo in the fourth minute, Wainaina’s first booming attempt at the Leopards goal finding Patrick Matasi with a block. Clifford Alwanga knocked it back to Wainaina whose second chance the ‘keeper could do nothing about.

In another long spell, the bankers were making confident moves, passing around well, the tone set by a fearless midfield of Wainaina, Alwanga, Brian Osumba and Kiongera. They dared Leopards to come out and fight.

Kiongera was to score the second after running in space, evading Nahimana to receive from Osumba and beat Matasi in the 42nd minute for 2-0.

Caleb Adola had done well to save the bankers several times, particularly from Were (21st minute), Baraza (24th) and again from the boots of Baraza in the second minute of the added time in the first period.

Having dominated possession in the opening half, the bankers again got off stronger, looking dangerous in all the 15 minutes of the re-start.

Alwanga unleashed a long one from 30 metres in the 52nd minute, flying just over the bar.

Things were not working for Leopards and Jan Koops wrung changes, bringing in Jimmy Bagaye for Victor Ochieng’ and Laurent Tumba for Floribert Ndayisaba. He was desperate for something different. Amon Muchiri also stepped in for another unproductive midfield man Bernard Mang’oli.

But KCB demonstrated too much hunger, not only for a win but to give a bloody nose to the more illustrious Leopards.

The bankers were literally savouring the opportunity to exhale. Their erratic play, producing only two wins in the previous 10 matches had left them flirting with the relegation zone.

He continually told his employers that things do happen in football and getting the Leopards scalp at a most unexpected time may prove that the coach was actually right. 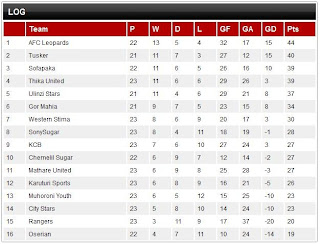