For the first time in many matches, we didn't have a Pre Match blog as your favourite blogger was holed up in Kigali enjoying Easter as the Leopards prepared to meet Rangers in Mumias. 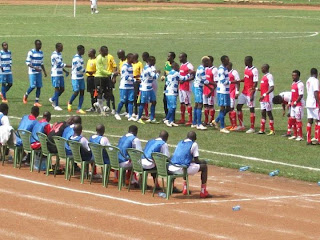 Despite the match stopping for more than a half an hour due to a heavy downpour, AFC Leopards remained determined and demolished Rangers 6-2 in the Kenyan Premier League tie on Sunday 8 April, at Mumias Sports Complex.

Martin Imbalambala opened the scoring in the 25th minute from Bernard Mang’oli’s corner kick to put the table toppers in the driving seat.

Three minutes later, Allan Wanga doubled the lead, chipping over the ball past an advancing Raphael Omondi before he was replaced by Jimmy Bageya after picking an ankle injury.

On resumption, Bageya ensured his name was on the score-sheet with a feeble shot that beat Rangers custodian very easily before Victor Ochieng raised up to slot home Mang’oli’s header in the 50th minute.

Noah Misiko replied quickly with a perfect shot as Ochieng and Bageya again fired home before Evans Ogutu added the second goal for the visitors after the downpour.

Leopards are still at the top of the table with 23 points, three points ahead of second placed Sofapaka. 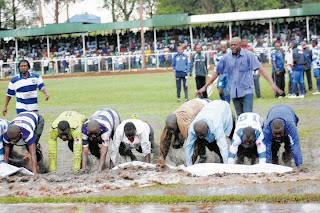 AFC Leopards made mince meat of a meek Rangers opposition rushing to a 2-0 lead after 30 minutes in a Kenyan Premier League match played on Sunday afternoon in Mumias Sports Complex. Victor Ochieng and Jimmy Bagaye both grabbed a brace in the second half while Allan Wanga and Martin Imbalambala scored a goal each to sink the troubled Rangers.

The match had to be temporarily stopped for over quarter of an hour as heavy rains threatened to disrupt the party in Mumias. However, after fans and players joined hands in draining the pitch, play resumed and AFC continued to win the match 6-2.

The win extended AFC Leopards supremacy at the helm of the KPL log with 23 points ahead of second placed Sofapaka (20) and their unbeaten matches to 22.

Captain Martin Imbalambala nodded in a corner kick from Bernard Mang’oli in 25th minute but the linesman ruled that it was scored in an offside position .The center referee stood his ground and overruled him to make it a one nil advantage in favor of AFC.

Two minutes later, international striker Allan Wanga latched onto a through ball by Salim Kinje to beat an onrushing Rangers goalie Raphael Omondi from 18 yards. Wanga who was a doubt to start the match due to injury had to be substituted a few minutes later due to a strained ankle injury.

The first half ended 2-0 in favor of the hosts. Upon resumption, AFC seemed to be breathing fire as they sank two quick goals through Victor Ochieng and Jimmy Bagaye.

But Rangers seemed to inject themselves some comeback power when Noah Misiko pulled a goal but this did little to stop the raging Leopard.

Victor Ochieng and Bageya once again added a goal each to extend Ingwe’s lead to 6-1 before the heavens opened up forcing the match officials to stop proceedings for a few minutes.

Rangers got another goal via Joseph Nuguna but it came a little too late to spoil the party at Mumias.

Speaking after the match, Rangers FC team manager Willis Waliaula acknowledged defeat and said it was a bad outing for his side. 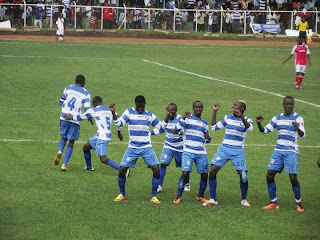 AFC Leopards went on a terrific ramble, tearing Rangers apart with awesome speed and were leading 6-1 before the match was in real danger of being halted -- to be replayed from scratch the following day -- after torrential rains flooded the Mumias Sugar Company’s pitch after 70 minutes.

That was not going to amuse AFC Leopards supporters. To a man, they mobilised to drain the water off the pitch after the rain had subsided.

All manner of equipment, no matter how impractical, was utilised and after 30 minutes of stoppage, the match resumed.

There was time for Rangers’ Joseph Njuguna to score the last goal of the match and the second for Rangers.
Martin Imbalambala shot Leopards into the lead after 25th minutes heading home a Bernard Mang’oli corner. Allan Wanga made it 2-0 in the 28th minute.

Jimmy Bageya came on for a limping Wanga and stretched the leopards lead to 3-0, with a 50th minute goal. Victor Ochieng’ then snatched the first of his brace in the 52nd minute to make it 4-0 before Noah Misiko pulled one back for Rangers to trail 1-4.

Ochieng’ was to score again in the 62nd minute before Bageya made in 6-1 before the rains came.

Futaa carried a story on the good news about the gate collection.

AFC Leopards did not only garner the three points after beating Rangers 6-2 in a Kenyan Premier League match on Sunday 8 April, but also harvested a gross of Kshs 910,000 at Mumias Sports Complex in gate collections.


"Bearing in mind that it’s in Mumias, I am happy with the attendance. I’m proud of our fans and I’m sure sooner than later we shall remain fixed on our target of 5,000 fans per match", Angode told futaa.com.

With no stadium charges, AFC Leopards, being the home team, will get 90% of the proceeds with a commission 10% going to the ticketing handlers Wells Fargo.

AFC Leopards hit-man Allan Wanga is due to undergo another scan to determine the extent of an ankle injury suffered during Sunday’s (Apr 8 ) 6-2 win over Rangers at Mumias Sports Complex.

Wanga who had picked an injury in the training session prior to the match; was ruled fit after the first scan indicated he’s not in danger but limped-off the pitch just after netting the second goal for his side.

"I suffered an injury on Thursday (Apr 5) but it’s not that way serious as per the scan results; it’s just a soft tissue and was given an okay for the match", Wanga told futaa.com.

"For sure I was having a difficult time out there, I thought it will be fine but after scoring it seemed to be getting worse and I actually felt the pain. I don’t know how bad it is but fingers crossed I’ll be OK. I'll be going for another scan before the end of the day", concluded Wanga.

Though the Harambee Stars striker left the match too early, the business was finished by his replacement Jimmy Bageya and Victor Ochieng who scored a brace each to seal an emphatic win. 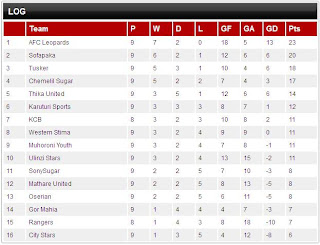