The Leopards head to Thika to meet Thika United in the tenth round of the KPL matches. So, as we always do, here is a quick round up of what the media have been saying about this clash.

This will definitely be the highlight fixture in what promising to be a pulsating weekend with hosts and fifth placed Thika United out to shatter Leopards extended unbeaten run of 22 matches.

Thika coach John Kamau believes his side will top Ingwe even though top marksman Kepha Aswani with eight goals is doubtful for the match.

The returning Moses Arita is expected to take the mantle and steer the striking force with the help of a solid back line marshalled by Harambee Stars regular Dennis Odhiambo.

Leopards travel to the game without two of their regulars, top scorer Allan Wanga and custodian Patrick Matasi but they still possess fire power in the form of last season’s top marksman, Mike Baraza and Jimmy Bageya.

Under Dutchman Jan Koops, Ingwe have mastered the art of grinding results and the away trip to Thika who have won three and drawn one of their last four presents them with a perfect opportunity to underline their title credentials.

Wilson Mathu of Futaa speaks to the Thika United goalie and reports:-
Thika United goalkeeper Lucas Indeche has assured their weekend opponents AFC Leopards that their 90 minutes on the pitch will be well spent in the weekend encounter.


The custodian says that the Brookside Boys are determined to keep their upward trend and no team was assured of a walk in the park against them.

"The 90 minutes will decide the winner when we meet Leopards but I know that my colleague and I have prepared well for the encounter. It will not be an easy match but we are prepared for it. The team is in good form and I believe we will stretch the same into the match".

Thika United will face Ingwe at home on Saturday 14 March 2012 at the Thika Municipal Stadium. Both teams have been faring well this season with Thika placed fifth and Leopards placed first. 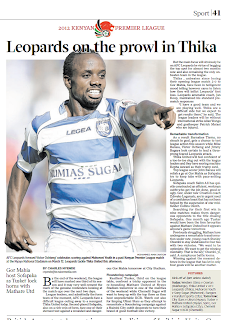 Charles Nyende of the Nation writes:-

By the end of the weekend, the league will have marked one third of its season and it may very well cement the mark of the genuine contenders looking at the match-ups over the next two days.

League leaders, and admittedly the form team of the moment, AFC Leopards face a difficult league outing away to a resurgent Thika United on Saturday.

Second-placed Sofapaka, also on a rich vein of form, face one of their sternest test against a wounded and dangerous Gor Mahia on Sunday at City Stadium.

But the main focus will obviously be on AFC Leopards be virtue of hogging the top spot for almost two months now and also remaining the only unbeaten team in the league.

Thika , unbeaten since losing their opening league match 2-0 to Gor Mahia, have been in belligerent mood telling however cares to listen how they will inflict Leopards’ first loss. Leopards amenable coach, Jan Koop, maintained his standard pre-match responses

“I have a good team and we are playing well. Thika are a difficult side but we expect to get results there,” he said. The league leaders will be without international strike Allan Wanga and goalkeeper Patrick Matasi who are injured.


As a result Barnabas Tiema, no slouch in goal, gets a chance to test league action this season while Mike Baraza, Victor Ochieng and Jimmy Bageya look certain to lead a three-prong feared Leopards attack.

Thika United will feel confident of a toe-to-toe slug out with the league leaders and they have scoring machine Kepha Aswani as their trump card.

James Waindi of the Standard writes:- 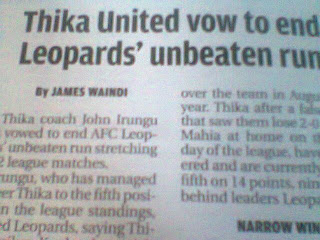 Irungu, who has managed to steer Thika to the fifth position in the league standings, goaded Leopards, saying Thika’s striker Kepha Aswani is better than international goal getter Allan Wanga ahead of their crucial Kenyan Premier League clash at the Thika Municipal Stadium on Saturday.

"Wanga is a good player but I believe we have better players at Thika. He has scored four goals this season for Leopards, while Aswani has seven from eight matches, I believe Aswani deserves to be in the national team as well," said Irungu.

He added: "We will not give Wanga or any Leopards’ star special attention, we have our own stars. In fact, at the moment, I am experiencing serious selection problems because everyone is fit and on form, so Leopards should come with a lot of caution."

Leopards, who have won the local title a record 13 (sic) times, have had one of their best starts to the season in more than a decade, enjoying a three point lead at the helm of the table and their Dutch coach Jan Koops is yet to lose a league match since taking over the team in August last year. Thika after a false start that saw them lose 2-0 to Gor Mahia at home on the first day of the league, have recovered and are currently placed fifth on 14 points, nine points behind leaders Leopards.

Since they lost to Gor, they have not lost any match at home, drawing 2-2 against 2010 champions Ulinzi Stars, beating Sony Sugar 1-0 and drawing 0-0 with champions Tusker.

The Thika side has always been a hard nut to crack for Ingwe, beating Leopards 2-0 in the first leg of the season last year in Mumias, before Leopards were forced a narrow 2-1 win in Thika during the second leg and Irungu believes it is now pay back time.

"We respect Leopards because they have been in the league competition for many years, but we want the maximum points to close the gap on them. They will certainly be under pressure to maintain their unbeaten record and push it to 23 matches, but we will just play our game and take our chances," said Irungu.

He added: "What I can promise is that Leopards have to drop points in Thika on Saturday. We have also been boosted by the return of our key striker Moses Arita from a shoulder injury."

Allan Wanga misses the match today and as Dun Okinyo of the Star wrote, the Leopards have a strong bench.

THE AFC Leopards list of the injured received new names in top players Allan Wanga and Patrick Matasi. All this has come ahead of tomorrow’s Kenyan Premier League crunch match against Thika United in Thika. Goalkeeper Matasi broke his finger in the match against Rangers FC in Mumias last weekend while Wanga hurt his knee in training on the eve of the same match.

Despite the injury, played and scored the opening goal in the 6-2 drubbing of the Rangers before being substituted. “The injury is not that serious,” said team manager Bernard Onyango but refused to elaborate.

“It was not his fault but he can’t play with this injury for at least two weeks,” Onyango said. Wanga, who has so far scored four goals in eight appearances this season was not at team’s training yesterday while Matasi trained with the rest of the team but did not play. “We really doubt if Matasi will play on Saturday  because he has a broken finger. He went for a scan and was asked to sit out in order not to risk it further,” Onyango said.

Onyango was quick to assure fans the absence of the two should not cause panic as they have a strong reserves bench. He singled out Barnabas Tiema as the possible replacement for Matasi between the posts. Tiema, was the first choice goalkeeper before Matasi joined the club. His last league match was against Ulinzi when Matasi was again ruled out due to another finger injury.

With Victor Ochieng, Mike Baraza, Jimmy Bagaye available, Jan Koops has plenty full of options in as far as the strike force is concerned. Other players who can be featured include Francis Chinjili and Brian Masiolo, who have not played for quite some time. However, Amon Muchiri, who was injured in the match against Gor Mahia, has resumed training.

That is a wrap folks! Hopefully Cynthia modelling the Thika United kit, wont be happy with the results of this clash! 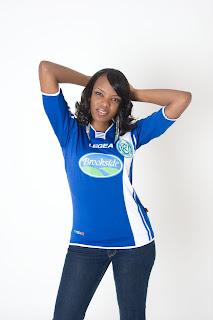