You better start paying attention to Collins Okinyo's predictions. He predicted a 1-1 draw, and the score at the end of the game was 1-1. 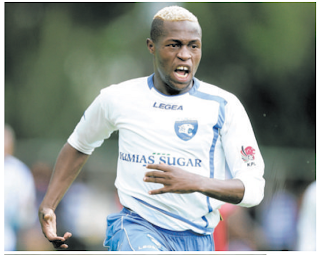 Here is how the wires captured and reported the action:-

Erick Masika scored in the 49th minute as AFC leopards came from a goal down to hold home team Karuturi Sports at their “Old Trafford” backyard in Naivasha.AFC Leopards had succumbed to a 13th minute goal from Benjamin Oketch.

The flower men had began the match on a high taking advantage of AFC Leopards’s long time to get into the match. In the 13th minute, John Mwangi was fouled from 40 yards out. Benjamin Oketch was handed the opportunity and  he sent a ferocious shot that evaded keeper Patrick Matasi for the first goal of the match.

Kennedy Oduor and John Mwangi were constant treats to the Leopards backline but the finishing was not quite on point.

Just as the first half was coming to an end, Leopards almost slipped into a second goal. Erick Masika slipped and missed a clearance from a long ball in. Allan Otindo picked up the ball and raced towards goal but the best he could do was shoot straight at keeper Patrick Matasi.

Come the second half coupled with some light showers,AFC Leopards came back marauding seeking for the equalizer to settle their nerves.  An attack masterminded by Salim Kinje from the right brought some nervous moments into the Karuturi back yard.

Jimmy Bagaye was fouled in the process. Kinje took the resultant freekick. Masika who was lurking in the 6-yard box dived in but his header came off a Karuturi defender.i


Kinje and Bernard Mang’oli started short the resultant corner with Knje swinging in the cross. Masika once again popped his head in and notched in his first goal of season for the Leopards.

The game was stopped in the 59th minute after Karuturi Coach Michael Nam was given the matching orders for protesting a decision. Nam refused to walk out of the pitch but concerted efforts from the team officials and the players cooled him down and he agreed to leave.

The game continued but none of the teams could get a second goal. Both resorted to cautious play with the rains pounding and making the pitch slippery.

Despite the draw,AFC still leads in the KPL log with 27 points,5 better than second placed Tusker FC who have a game at hand.

Kenyan Premier League leaders AFC Leopards went five points clear after a 1-1 draw with Karuturi Sports at Old Trafford Stadium in Naivasha. Benjamin Oketch and Eric Masika scored in either half of the match played under rainy conditions.

The match was not without some drama as Karuturi coach Michael Nam was sent off in the second half for protesting against the referee's decision not to award a penalty for what looked like a Jonas Nahimana handball.

Coach Jan Koops made two changes to the side that lost 2-0 to Tusker last weekend, with Salim Kinje returning from injury and Laurent Tumba getting his first start of the season. Top scorers Allan Wanga and Mike Baraza were ruled out with injuries.

Karuturi enjoyed large chucks of possession in the first half with the Leopards' defence being broken through almost at will by Allan Otindo, John Mwangi and industrious midfielder Kennedy Oduor.

Benjamin Oketh put Karuturi ahead in the 17th minute with a stunning free kick from 30 yards to give the flowermen the deserved lead, after a foul on John Mwangi. The match was punctuated with knocks on several players, the biggest casulty being Ingwe's
Jimmy Bagaye.

Karuturi broke on the counter attack moments later. Oduor fed Otindo who beat Eric Masika but could only see his shot fly into the hands of Patrick Matasi.

Leopards were the better side in the second half. Amon Muchiri came on for the shaky Robert Syongoh while injured Bagaye was replaced by Francis Chinjili.

Salim Kinje played a short corner kick with Bernard Mang'oli in the 50th minute. Mang'oli returned the ball to Kinje who floated a cross into the area for Masika to head into the net for the equaliser, his first for Leopards since signing from Gor Mahia.

Play was stopped for close to ten minutes as Nam refused to leave the pitch after being sent off. Nam had to be escorted out by police officers.

Oduor saw his free kick go just inches off target in the 65th minute. Chinjili could have netted the winnner for Ingwe but his hurried shot went wide with only Wanyika to beat in the 73rd minute.

Leopards held the flowermen to open the gap on top of the league to 5 points clear of second placed Tusker who face Sofapaka on Monday. Karuturi are 8th with 17 points.

AFC Leopards extended their lead atop the Kenyan Premier League after coming from behind to hold Karuturi Sports to a 1-1 draw in a match played at the Karuturi Stadium in Naivasha, Sunday 29 April 2012.

Benjamin Oketch put Karuturi in the lead, with defender Eric Masika heading home his first for the club at the beggining of the second half.

The flowermen would go on full throttle afterwards, in search of a second goal, but strikers Allan Otindo and John Mwangi failed to register anything of importance on Patrick Matasi's goal.

Leopards went into the half time break having had no shots on target and would have to up the ante in the second period to get something from the game.

Coach Jan Koops' words must have been magic, as they made the perfect start to the second half, Masika heading home a Victor Ochieng cross on 49 minutes, after a training ground set-piece routine also involving midfielder Salim Khamis.

A few minutes later, there was drama as Karuturi coach Micheal Nam was sent to the stands, this after walking onto the pitch in protest over a penalty claim.

However after the goal and drama, things slowed down as the effects of a packed midfield and heavy rain that pounded the area started wearing in on the game.

Leopards made two changes with 25 minutes to go, Francis Chinjili and Amon Muchiri coming in for Jimmy Bageya and Robert Syongo.

Karuturi on the other hand brought in Jacob and Allan Omondi in search of forward impetus, but to no avail.

Leopards thus extend their lead to five points (27), over second placed Tusker FC, though the brewers have a game in hand. Karuturi on the other hand remain eighth with 17 points.
The Daily Nation carried this story:- 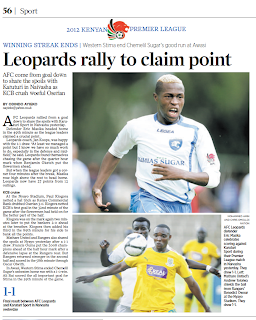 Eric Masika saved AFC Leopards from the jaws of defeat on Sunday, netting an equaliser against Karuturi Sports as the two sides shared the spoils on Sunday in Naivasha.

Masika headed home in the 49th minute as the league leaders, who struggled in the game, went home with a point.
Leopards Dutch coach, Jan Koops, was happy with a point after the 1-1 draw but once again was disappointed with his team’s general performance.
“At least we managed a point but I know we have so much work to do, especially in the defence and midfield,’’ he said.
Leopards found themselves chasing the game after the quarter hour mark when Benjamin Oketch put the flowermen ahead.
The goal was a wake-up call for Ingwe, who failed to win the midfield battle in the game.
Martin Imbalabala, the defensive cover in the Leopards’ midfield, struggled to cope with the speed of the game and the strikers were not getting the ball upfront.


But when the league leaders got a corner four minutes after the break, Masika rose high above the rest to head home and push Ingwe further at the top.
Leopards, who lost 2-0 to champions Tusker last weekend, now have 27 points from 12 outings in the league.

The Standard has this story:-

AFC Leopards failed to win for the second time in a row but will be glad with the point after being held to a 1-1 draw by Karuturi Sports in Naivasha.

After losing 2-0 last weekend to Kenyan Premier League (KPL) champions Tusker, Leopards were expecting to bounce back to winning ways and extending their lead at the top of the standings.

But with a huge contingent of fans behind them, Leopards fell to an early 16th minute goal from Benjamin Oketch, which threatened to spoil the party for the league leaders. Oketch scored with a brilliant free-kick that beat Patrick Matasi all the way in goal.

Eric Masika dropped from the national team Harambee Stars when the side was named last Friday, equalised for Leopards in the 49th minute heading home a Victor Ochieng’ free-kick.

After the goal, Karuturi coach Michael Nam was sent off to the stands for protesting a decision not to award his side what he deemed to have been a legitimate penalty.

In the 75th minute, Leopards coach Jaan Koops brought in Francis Chinjili and Amon Muchiri as his side pushed forward for the elusive winner but this did not yield any results.

Erick Masika salvaged a point for AFC Leopards in Naivasha heading home an equaliser in a 1-1 draw against Karuturi Sports on Sunday.

The former Gor Mahia stopper nodded the ball in on 63 minutes to ensure Leopards would not suffer a second consecutive loss in a Kenyan Premier League tie played under heavy downpour.

Leopards however came in the second half with their guns blazing forcing Karuturi goalkeeper Mike Wanyika to make several saves but he was unable to keep out Masika’s effort off a Salim Kinje freekick.

Francis Chinjili could have won it for the visitors on 70 minutes when through on goal but he blasted the ball over the bar.

Karuturi coach Mike Nam was sent off in the dying minutes by referee David Gikonyo for questioning one of his calls. But the tactician met hostile treatment from Leopards fans who blocked him from leaving the pitch and he needed police escort to leave the field.

Both teams made several substitutions with Karuturi rested John Mwangi, Mustapha Ogutu and Allan Otindo who were replaced by Jacob Omondi, Allan Omondi and Gerald Mukonza while Leopards brought in Chinjili for Jimmy Bagaye.

Benjamin Oketch had home side Karuturi Sports up in the 16th minute, his well taken free-kick 35 metres out beating AFC Leopards’ ‘keeper Patrick Matasi.
Leopards had drawn their matches at Karuturi since 2009 and it was all they could hope for this time.

Defender Eric Masika saved the visitors’ blushes, the ex-Gor Mahia man scoring his first goal for Leopards with a second half header. Masika connected with a Victor Ochieng’ cross on 49 minutes.

Karuturi coach Michael Nam will be awaiting league disciplinary action after making a nuisance of himself -- going to sit on the pitch and holding up play --protesting that the referee had ignored a Karuturi penalty claim.

When Nam was ejected by the referee and play resumed, Leopards laid siege but they could not grab the winner. 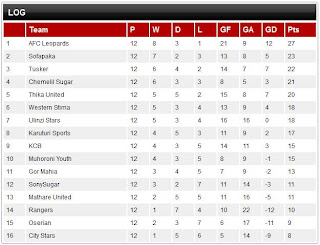