Admit it. Go on. Just admit it. You have enjoyed this season so far. Even if you are not Abraham, you have sounded cocky, asking people, “How many goals did we win by?” instead of asking, “What was the score?”

Your memory bank is teeming with images that will never be erased.

The image of Patrick Matasi, cool as a bomb disposal expert, using his hands and feet to stop not one, but two penalties in the same match. He could have saved a third with his head, but it was just not awarded to Ulinzi.

The image of your despairing fellow fan as we conceded a corner; quickly turned into ecstasy and planting of kisses on strangers of the opposite sex as Mike Baraza scores a delicious goal past the keeper, not once, but against Oserian and Thika Utd.

“Another Flawless Counter!” you could easily have shouted but instead you chose to scream the abbreviation.

The image of Jonas Nahimana; the guy is admittedly a looker; but he slots in not one, but two penalties, without even looking up. He stores the image of the goal in his head and just plants the ball as he did against Ulinzi and then against Stima.

The image of Allan Wanga, smashing the ball, not once or even twice, but thrice, with a shot that Kenya Power have been studying keenly in the face of frequent black-outs, to find out if that shot can be an alternative source of power.

And don’t get me started on the dance that he has bequeathed our doting eyes! 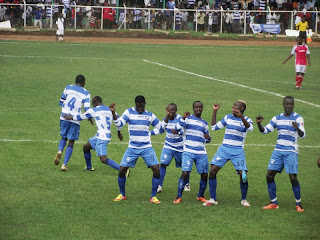 The image of Jimmy Bageya, dancing when we have scored and even before we score. He picks the ball, flicks his leg over the ball, his leg caresses the ball, and the ball just closes its eyes telling him, “Would you do that again?” And he does another step-over and sends another ball into the D. The next thing you know, the ball has been put to bed in the net.

That is why he is the King of Assists for this season.

The image of Victor Ochieng, diminutive but the reason why they say dynamite comes in small packages. He scored an impossible goal against Muhoroni that had many fans booking appointments with ophthalmologists and opticians the following day! How did he do that? He did what was mathematically impossible; with some people thinking he had hit the side netting whilst others were left asking: What? How? Where? Which? Who?

The image of Bernard Mangoli one of the few guys we know on the Planet who can thread the ball through the eye of a needle as he sends the ball into a position that makes you woinder whether he has one set of eyes or a dozen. He bosses the midfield like a colossus and the way he takes corners, he could make one great Formula 1 driver. And to drive the point home, he is the only player to score for Leopards each season for the last three seasons.

The image of the indefatigable Charles Okwemba doing what most players don’t do in addition to delivering balls with bouquet of flowers, to the box. Against Oserian, he was tackled not once but twice before he went down after the opposing player finally scythed him. But that extra metre he gained as he was on his feet refusing to go down easily, was key as from a pinpoint free kick delivered by Kinje, Allan Wanga opened his goal account with the Leopards.

The image of Salim Kinje, like above, leaving destruction like a tsunami with the way he whips in his free kicks. His determination showed against Thika Utd as we stored the image of him withstanding an injury and pain. They way he soldiered on bravely paid off and he even took part in the salute as we scored our second.

The image of Robert Syongo, not hogging the limelight or the headlines, when in truth, we should be cutting down the whole of Mau Forest to print newspapers with his name in the headline as an unsung hero who is a joy to watch as he imitates Leopards of old who were wing backs. His pass to Ochieng that led to the Baraza goal against KCB was worth each bob you could paid.

The image of Edwin Wafula with his telegraphic mind. He reads the opponents move towards our goal so well you would think he crammed it in a nursery rhyme and then he counters those moves with such precise clearances you wonder why they didn’t take him in a Clearance and Forwarding Firm.

The image of Martin Imbalambala, wearing the “C” on his arm band and then approaching a ball that needs to be thrown back in. He throws the ball so far, you could excuse him if he misses some fixtures in the summer as he could represent the country in the shot put at the London Olympics. Calm, composed, calculated… you can roll out a lot of words that symbolize the ‘C’ he wears on his armband and you will still find he is the engine of our success as the captain.

There are of course other images that have been etched in our collective psyche and which for lack of space I haven’t been able to mention. I appreciate all Leopards players even those not featured here and who are without a doubt part of this winning team. But the season is one third gone, and we have another two thirds to see for ourselves more and probably better images. Because we are Leopards, and our vision is reportedly six times better than those of humans.

So now you admit it, right?