Leopards beat Ulinzi 2-0 away to go back to the top of the league after having surrendered the lead for twenty four hours. 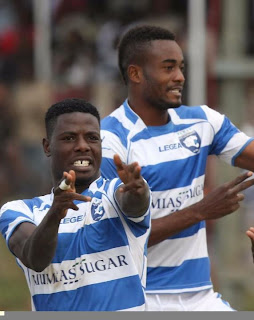 An action packed first first saw both sides ask questions of each other, Jimmy Bagaye and Allan Wanga causing the Ulinzi defense all sorts of problems. The home side would also ask questions of Leopards but the antics of Patrick Matasi in goal ensured that the score line would remain 0-0 as time went by.

Ulinzi would go in pursuit of the opener and had their chance when Leopards defender Eric Masika brought down Steve Waruru inside the box on 31 minutes. Center referee Nassur Doka pointed to the penalty spot but Matasi blocked Waruru's penalty, keeping the scores at 0-0.

Matasi would then deny Ulinzi's Wycliffe Ochomo before half time as the teams went into the interval deadlocked at 0-0.

Odhiambo would soon be called into action, saving from Allan Wanga after Ben Mang'oli had played him in.

With the tide shifting, Ulinzi went in pursuit of an equalizer and had the opportunity handed to them on a silver platter, winning a penalty after Nahimana handled in the box. Kelvin Amwayi, formerly at Western Stima, stepped up to take the kick but Matasi did the improbable, blocking his shot and protecting Leopards lead.

Leopards would drill the final nail in Ulinzi's coffin, winning a free kick as they made in-roads in their opponents territory. Wanga stepped up to take the free kick, beating a stranded Odhiambo in the Ulinzi goal as he doubled the lead, a lead that they held to the end.

The result sees Leopards stay top of the 2012 KPL with ten points from four outings. 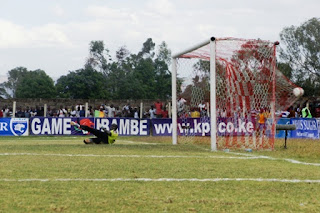 Futaa had this report by Patrick Korir:-

Three penalties, two saved, one scored was the summary of a Kenyan Premier League game played at the Afraha Stadium on Sunday 4 March 2012 that AFC Leopards emerged 0-2 winners.

On 34 minutes, a charging central defender Eric Masika hacked down the dangerous striker in the box and Centre referee Nassur Doka pointed straight to the penalty spot.

Waruru’s shot went straight to Matasi who got his foot to the ball that went back into play.

Prior to that penalty miss, AFC Leopards had shown early intent earning back to back corners in the third and fourth minutes. After the first, Ulinzi’s Mulinge Munandi put his foot forward to get the ball off the line to concede the second that was finally wasted.

On nine minutes, Kevin Serenge wins a free kick, and as it floats goal ward it was met by unmarked Geoffrey Kokoyo but his kick was wayward.

There was action in each of three minutes starting with the 27th minute. Former Gor Mahia striker Wycliffe Ochomo was in the box but caught offside and the next minute a shot on goal by Waruru was punched for a corner by Matasi for a corner.

The next minute Jimmy Bageya fouled Serenge and a free kick floated to the box was wasted by Eric Apul who headed it wide.

The game rolled to the break with AFC Leopards enjoying a 54% game share compared to hosts Ulinzi who had 46%.

Three minutes into the second half, Geoffrey Kokoyo with a seemingly harmless tackle got Bageya rolling in the box and Doka, for a second time in the game, pointed to the spot. Jonas Nahimana stepped up to score handing Leopards a 0-1 lead.

On 54 minutes, Stephen Waruru sent a long lob from the right into the box but a header from Ochomo was picked up by Matasi. Five minute later Waruru’s shot in the box was handled by Nahimana and for a third time in the game Doka pointed to the spot'.

Kevin Amwayi went for the penalty but for a second time in the game, Matasi in Leopard’s goal went the right way to save his team.

Ulinzi could have leveled on 70 minutes had Evans Amuoka, alone in the box, not miscued a shot when well placed.

Three minutes later, Kokoyo downed his best friend Allan Wanga at the edge of the box. Wanga then dusted himself up, stepped back and sent a rocket to the top right corner away from Jacktone Odhiambo.

The game then rolled on to its final minutes and Ulinzi could have gone down further had its former player Mike Baraza not have been denied in the final minute of the game by keeper Odhiambo.

With the win, Leopards who began the day placed second in the league standings now romp back to the top with ten points from four games. Ulinzi remain seventh with four points.

The Nation carried this report though the same had some factual errors:- 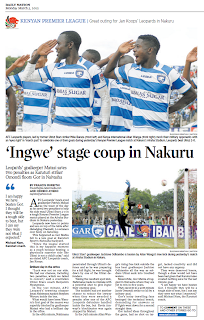 
Supersport had this report from Collins Okinyo:-

Goalkeeper Patrick Matasi was the hero for his side saving two penalties as AFC Leopards humbled Ulinzi Stars 2-0 in an electrifying game played at Afraha Stadium in Nakuru on Sunday.

Burundian International Jonas Nahimana put Leopards ahead in the 49th minute from the penalty spot after Stephen Ocholla has impeded Jimmy Bageya forcing referee Nasur Doka to point to the spot.

AFC Leopards pressure seemed relentless as Allan Wanga put Leopards further ahead in the 70th minute firing in an unstoppable freekick that beat Ulinzi keeper Jacktone Odhiambo all ends up.

Earlier in the game Eric Masika clattered Stephen Waruru in the box but last year’s top marksman failed to beat Matasi with the resultant spot kick.

The scenario replicated itself in the 55th minute when Nahimana handled in the box after a fierce Waruru shot but this time it was Kevin Amwayi who saw his penalty once again blocked by the impressive Matasi to deny Ulinzi yet again.

The win pushed Leopard back to the top of the league table with 10 points from four games and it was the second loss to Ulinzi who have four points.

"The players gave 100 percent and I have to give a special mention to keeper Patrick Matasi for his heroic saves that enabled us to win," AFC Leopards coach Jan Koops told SuperSport.com.

Ulinzi coach Benjamin Nyangweso was a dejected man after the match, "we had very clear chances to go ahead but we failed to take them with the two lost penalties that gave Leopards the incentive."

AFC Leopards, for the first time that most can remember, rode to the top of the Kenyan Premier League, the heroics of their goalie Patrick Matasi deciding the 2-0 result of a dramatic encounter with Ulinzi Stars at Afraha Stadium, Nakuru on Sunday.

In a day of unimaginable jubilation for Leopards fans, it was massive gloom for supporters of arch rivals Gor Mahia who were shocked by a 1-0 defeat by Karuturi Sports in Naivasha, sparking bitter criticism of coach Anaba Aono.


Leopards’ supporters may have believed in the ability of their team but after an absorbing ninety minutes at Afraha Stadium, they may have discovered that the team also carried a fair amount of luck this season.

Three deserved penalties were awarded but Matasi foiled two of Ulinzi’s as Leopards converted one of theirs.

Two minutes into the second half Geoffrey Kokoyo brought down Leopards’ speed star Jimmy Bageya in the box and Rwanda international Jonas Nahimana made no mistake converting to give Leopards a 1-0 lead.

Ironically, Nahimana was to concede Leopards’ second penalty when he handled Waruru’s goal-bound shot in the box.

But when Kevin Amwayi stepped up to take the kick, Matasi palmed the ball back into play and danger was dealt with by his defence.

After a double penalty save that kept his side in the game against Ulinzi Stars’, AFC Leopards keeper Patrick Matasi was on Sunday afternoon named man of the match to cap AFC Leopards’  super win in Nakuru against 2010 KPL champions Ulinzi Stars who are yet to find a winning formula this season.

Matasi while speaking after the match thanked his hands for guiding AFC to an important win away from home and especially stopping two penalties by Stephen Waruru and Kevin Serenge.

“I thank God for the win, that is the most important thing.” He said.

Matasi reflected back to last week’s performance against Oserian saying he had a weak outing and that motivated his performance on Sunday against Ulinzi Stars.

“ I did not give my best last weekend and I wanted to cover that up wit a good outing today. My defense covered me up well because I was so down against Oserian. I was motivated by that and I wanted to prove a point. This is just the beginning of better things and I thank God because the day went well for all of us.”  He said.

His trainer Mohammed Fwaya was full of praise for the keeper.

“Ever since I started coaching him, he has improved a lot in many aspects of the game and I see him growing each day. He is destined for greatness.” Said Fwaya.

Coach Koops also cast the same image of the keeper.

“I mean what can I say. He is just great and he proved to everyone that he should be in the national team. Saving two penalties in one match and maintaining composure throughout the match is a quality one admires to have in his team.” Said Koops.

Futaa's Brian Moseti also reported on the Man of the Match Award.