Jonas Paco Nahimana scored a brace as Leopards came from behind to beat Western Stima 2-1. Look out for that word 'brace' and the phrase 'came from behind' as it will appear in many press reports below.

Jonas Nahimana hit a brace as AFC Leopards came from a goal down to secure a 2-1 win against Western Stima at Mumia Complex Stadium on Saturday afternoon.

This turned out to be one of the best attended AFC Leopards’ matches in Mumias with the Sugar town having been painted Blue. Being a Western Province derby, the match attracted thousands of soccer enthusiasts in the region with majority being in support of AFC Leopards.

The hosts AFC Leopards had the first break on play with Allan Wanga having great run just minutes after play on but his final touch went wide following service from a cross.Despite a brialliant start it was Western Stima who took the lead when Captain Fredrick Shimonyo converted from the spot in the 28th Minute after Ali Bhai was hacked inside the box.

Jonas Nahimama equalized a minute to the break after connecting to Salim Kinje’s free kick with a good header.

The second half had balanced action, the game seemed to be headed for shared spoils until the 80th minute when a goal bound Allan Wanga was fouled inside the box. Jonas Nahimana rose up to the task and did not disappoint to make it 2-1 for AFC leopards.

The win sets AFC Leopards a three points’ apart from second placed Sofapaka who have to wait until Monday for their fixture against Ulinzi Stars.

In the 28th minute Bai's efforts were rewarded winning a penalty that was converted by Fredrick Shimonyo to put the Power-men in the driving seat after Patrick Matasi fouled him in the area.


Three minutes to the break, Rwandese international Jonas Paco Nahimana brought down the Stadium with his sterling header from Salim Kinje’s free-kick to make the score 1-1.

AFC could have extended the lead in the 55th minute but Bernard Mang’oli’s long range shot went wide.

Nahimana was again on the mark this time scoring from the spot to give Ingwe their fifth win of the season, after Allan Wanga was dropped in the box by Stima defender Robert Kwaye.

With this win, AFC have now extended their lead on the top of the table to three points over second placed Sofapaka who face Ulinzi Stars on Monday 26 March.

Jonas Nahimana's brace guided AFC Leopards to their sixth win of the season as they came from behind to beat Western Stima 2-1 in an entertaining match played at Mumias Sports Complex on Saturday.

Leopards dusted themselves up and pummelled Stima’s goal in search of an equaliser with Nahimana heading his first of the game two minutes from halftime.

The second half was a see saw affair as both teams looking for a winner but it was Leopards who had the last laugh as Allan Wanga was brought down in the box forcing referee Damaris Kimani to point to the spot.

Nahimana calmly slotted in the resultant penalty seven minutes from time to sounds of Isikuti drums and singing from their travelling fans.

Leopards stay top of the log for the seventh week with 17 points from seven matches.

"I am not happy with the officiating since Leopards did not deserve their second goal which was a wrong call by the referee," Stima coach Henry Omino told SuperSport.com.

Playing this home fixture at the Mumias Sports Complex, AFC Leopards rallied from a goal down to stay top of the KPL with a 2-1 win over Western Stima.

Second half action saw plenty of end to end action and with eleven minutes to play, Leopards' striker Allan Wanga was brought down in the box, Nahimana scored the resultant penalty that sealed the three points for Leopards, a result that saw them stay unbeaten and top of the table.

It was Isikuti meet Isikuti at the much hyped Kenyan Premier League (KPL) encounter dubbed ‘ The Western Derby’ staged at Mumias Complex on Saturday.


The match lived up to its billing with fireworks evident from both sides.

Burundian import Jonas Nahimana scored a brace for the victors to cement their place at the top of the table.

A minute of silence was observed before the start of the clash in respect of the fallen Ingwe fanatic who perished a few days ago in the tragic Machakos country bus bomb explosion in Nairobi.

The match started scrappily with both sides losing balls out of play on more scores during the deadly encounter and it was sensational Allan Wanga who provided the first challenge of the clash.

His individual effort from the right flank nearly bore fruits for the hosts, but went wide.

Captain Ali Bai for Western Stima nearly came close to putting his name on the score sheet in the 24th minute, but his challenge was parried away by in-form Leopards custodian Patrick Matasi.


A minute later Stima’s incessant pressure paid off when Bai was brought down in the penalty by Matasi and playermaker Fred Shimonyo struck home.

In an interesting turn of events, the goal seemed to awaken Leopards and the game’s tempo upped as both tacticians prowled the touch line. Three minutes to half time, Nahimana levelled things for AFC with a fantastic header from a Salim Kinje freekick from the left flank.

On resumption, Stima made early changes to their side that seemed to up their prospects. Veteran striker Mark Sirengo came in for Justin Monda as Alloys Mangi went out for a towering figure, Nelson Simwa.

Simwa combined well with Sirengo, but their efforts went to waste.
Leopards pulled the trigger in the 78th minute when danger man Allan Wanga was fouled in the box by Stima defender Robert Kwaye and Nahimana struck from the spot sending keeper David Juma the wrong way to ensure Ingwe bagged maximum points.

Leopards tactician Jan Koops praised his side for the win, saying he was impressed for extending their unbeaten record. 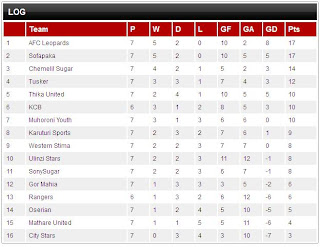