Leopards went back to the top of the league after losing the leadership for 24 hours to Sofapaka when they came from behind to beat a stubborn Muhoroni Youth 2-1 at the Nyayo National Stadium.

How the press covered it:-

AFC Leopards got back to the summit of the Kenyan Premier League after a hard earned 2-1 win over League debutants Muhoroni Youth in an exciting Kenya Premier League match played at the Nyayo National Stadium on Sunday afternoon. 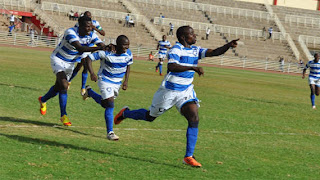 Leopards were trailing 0-1 at half time but a thunderbolt from Allan Wanga at the start of the second half cancelled James Okullo’s opener with substitute Victor Ochieng’ crowning off the win with a shot from a tight angle.

Muhoroni started the match a better side pinning the Leopards into their own half. The centre back partnership between Jonas Nahimana and Erick Masika was shaky with the Muhoroni attack trying to exploit their options from there. Amon Muchiri was also unstable on the wings.

It only took 17 minutes for the boys from Muhoroni to notch in the opener. A defensive blunder  gifted James Okullo  the ball right inside the Leopards box, and the winger thrashed the ball inside to erase Patrick Matasi’s four game clean sheet.

Leopards tried hard to get the equalizer before the breather but the Muhoroni side did well in defense. Allan Wanga came closest half an hour into the match but his diving header from Edwin Baraza’s cross went inches over the bar. Jimmy Bageya’s shot after beating the defense three minutes to half time was saved by Gradus Ochieng in the Muhoroni goal.

Come the second half, Ingwe came back like real hungry Leopards taking the Muhoroni side right into their territory. Victor Ochieng’ came in for the not-so-convincing Charles Okwemba. Allan Wanga and Jimmy Bageya were constant threats in the Muhoroni goal with both shots going over the bar in quick succession.


Allan Wanga sounded the reply in emphatic fashion banging in a 67th minute shot with a screamer that only took the shaking of the net to notify Gradus Ochieng’ that indeed the ball had been buried in his net.

Ingwe doubled their advantage just six minutes later when Victor Ochieng’ picked up a loose ball from the right, cut in and beat Gradus at his own near post.

The win now sees Leopards move to the summit of the league on 13 points, two clear of second placed Sofapaka who were held to a barren draw by Oserian FC on Saturday.

AFC Leopards next assignment will be a mouthwatering clash against arch rivals Gor Mahia at the Nyayo National Stadium next weekend.

The Daily Nation covered it with a photo of Wanga receiving a pre-match award. 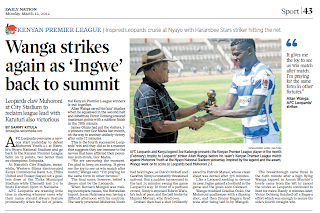 AFC Leopards overcame a nervous start on Sunday to defeat Muhoroni Youth 2-1 at Nairobi’s Nyayo National Stadium and go back to the helm on 13 points, two better than ex-champions Sofapaka.
AFC Leopards, once again, are wasting little time showing whoever cares why their name should always figure prominently when the list of potential Kenyan Premier League winners is being put together.


Allan Wanga saved his fans’ blushes when he equalised in the second half and substitute Victor Ochieng ensured maximum points with a sublime finish in the 78th minute.


James Okulo had put the visitors - 1-0 winners over Gor Mahia last month - on the way to another unlikely victory after only 17 minutes.


This is their fourth successive Leopards’ win and they did so in a manner that suggests they are immune to the nerves that have afflicted their perennial opponents, Gor Mahia.


That reflected their superiority in a season that seems theirs to lose. 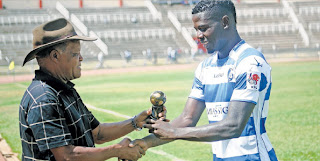 “We are savouring the moment. I’m glad to keep on scoring. It gives me the joy to see us win match after match,” Wanga said. “I’m praying for the same form in other fixtures.”


The last scores, however, belied a dreary start by the Leopards.
When Bernard Mangoli was making incomplete passes, the Burundian import, Jonas Nahimana was having a difficult afternoon with his controls. The newly promoted Muhoroni Youth had held Ingwe, as David Ombati and Geoffrey Simiyu constantly threatened upfront. But a sudden turnaround in the last 25 minutes turned the game Leopard’s way. In front of a partisan crowd, Simiyu exposed Edwin Wafula’s lack of pace, and the ball broke for Hamisi Mwinyi, who fired over.
Ombati then had a shot brilliantly saved by Patrick Matasi, whose clean sheet was dotted after 376 minutes.
Gradually, though and like a Leopard seeking to devour its prey, Ingwe gained a foothold in the game, and the goals soon followed.

Wanga troubled Gradius Ooko, the Muhoroni goalkeeper with a dipping shot, and then Jimmy Bageya fired wide after being laid in by Mangoli.
The breakthrough came three in the 64th minute after a high flying Wanga tapped in Amon Muchiri’s lovely cross from the left to cancel the scores as Leopards continued to hunt for more.
Barely 11 minutes later, Victor Ochieng, finished a Bageya’s effort, which was enough to secure his side’s fourth straight win and consequently extend their unbeaten streak to 20 matches.

James Onyango shot the fearless Muhoroni Youth to a 17th minute lead but unlike the last time they did the same to the big-name Gor Mahia, running out 1-0 winners, the spirited rookies found AFC Leopards a different kettle of fish.

Leopards hit back with intent and inside three minutes, Gradus Ochieng’ in the Muhoroni goal, had to deal with fierce shooting from the on-form Leopards Kenya international striker Allan Wanga.

In the 40th minute Muhoroni defenses were troubled and escaped with Wanga making a well-placed appeal for a penalty after he was fouled in the box.

Kenya defender Eric Masika then missed narrowly with a header for Leopards in the 56th minute. But Muhoroni would crack eight minutes later, Wanga tapping in an Amon Muchiri cross from the left to level.
Victor Ochieng’, one of last season’s top scorers that was bought from Chemelil, had come as a substitute before he scored his first goal for Leopards from a Jimmy Bageya assist in the 75th minute.

Second half goals from Allan Wanga and Victor Ochieng' cancelled out James Okullo's early strike as AFC Leopards returned to the top of the KPL with a 2-1 come from behind win over visiting Muhoroni Youth at the Nyayo National Stadium on Sunday afternoon.

Alfred Imonje's side were the livelier of the two sides during the first quarter of the match, getting their just reward when Okullo capitalized on indecision within the Leopards defence, his strike on 16 minutes putting the side from Western Kenya ahead. This incidentally was the first goal scored against Leopards and goalkeeper Patrick Matasi in 376 minutes this season.

This seemed to rattle the hitherto lethargic Leopards into action, Allan Wanga and Jimmy Bagaye coming close to leveling for the home side. Muhoroni would frustrate Leopards, taking a 1-0 lead into the interval.

Jan Koops' half time pep talk and change in tactics saw Leopards take the game to their visitors upon resumption. Victor Ochieng' on for Charles Okwemba, brought life to Leopards as they went in pursuit of the equalizer.

Pressing their opponents, Leopards would blow several chances before Allan Wanga, who received his KPL Player of the Month award just before kick off, found himself unmarked in the box, blasting home to level the scores on 66 minutes with his third KPL goal of the season. Ochieng justified his inclusion with the winning goal from a tight angle on 73 minutes.

The win saw Leopards retake the lead from Sofapaka who had gone top twenty hours earlier when they played to a 0-0 draw in Naivasha against Oserian. Leopards are on 13 points courtesy of four wins and a draw. Sofapaka have 11 points coming off three wins and two draws. 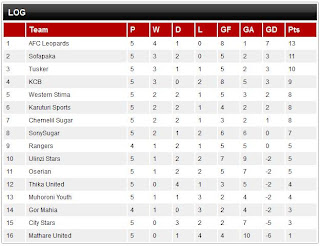