Remember this?
AFC Leopards has a new Coach – former international Nick Yakhama. The changes follow the resignation of Edward Manoah soon after the 2-0 loss to Bandari in Mombasa this past weekend during the first weekend of the second leg of the 2009 Kenyan Premier League. Yakhama becomes the clubs’ third coach this season. Until his resignation, Manoah had taken over the reigns of Gilbert Selebwa who was first suspended but opted to resign soon after the team failed to hang on to a one goal advantage to share the spoils with, incidentally, Bandari during the first leg. According to the club website, Yakhama will work alongside the teams’ Technical Director Twahir Muhidin. Yakhama, a former Mumias Sugar player, was in the past season a Western Stima Coach before resigning along the way. Yakhama has an onerous task of turning AFC Leopards fortunes around and to please its uncompromising supporters considering the team is at the bottom of the 16 team Kenyan Premier League log with 10 points having won just once, drawn seven times and lost the other eight games out of the 16 games played so far.
That was in 2009 in case you are confused. This is 2011.
Former Chemelil Sugar FC coach Nick Yakhama is back at AFC Leopards.
It will be the second stint at Leopards for the former international who was called in to save the club from relegation in 2009 only to be shown the door at the start of the following season. Club Chairman Alex Ole Magelo told SuperSport.com that the new coach will be introduced to the players on Thursday.
The appointment presents a new lease of life for Yakhama who was shown the door at Chemelil last weekend. His first task will be to guide the team as they face Bandari this weekend. Leopards lost to Gilbert Selebwa's Congo United 1-0 last weekend, which led to the sacking of Robert Matano.

Nich Yakhama is back at AFC Leopards. The 13-time Premier League champions re-appointed the coach on Wednesday following the sacking of Robert Matano at the weekend.

It will be the second stint at Leopards for the former international who was called in to save the club from relegation in 2009 only to be shown the door at the start of the following season.

The appointment presents a new lease of life for Yakhama who was shown the door at Chemelil Sugar last weekend. Leopards, who were wounded over the weekend with that 0-1 loss to Congo United, are set to unveil Yakhama on Thursday.

“The club has been in the search for a new coach, and after considering a number of candidates, we opted to pick Yakhama.”

The chairman said the aim of the rapid replacement of Matano was to give the new coach as much time as possible to bolster the squad for the upcoming fixtures.

Several high-profile names were being linked with the job after the club, whose last league triumph was 13 years ago, made it clear they needed a “top class” trainer with ambition for success after such a long time in the wilderness.

Former Tusker coach James Nandwa and Oliver Page he of the City Stars were some of the interested parties. The former Chemelil sugar tactician tendered his resignation on Tuesday evening amidst reports that he had been fired a day before by the Chemelil management.

He has his work cut out as the widely-supported club seeks to catch up with the leading pack in the league. They are currently nine points adrift of leaders Tusker.

The club, on 12 points, is positioned eighth in the league standings and will host another struggling Bandari side on Sunday at the Nyayo National Stadium.

While circumstances under which a team like United dismissed Gideon Ochieng’ might be understandable (they have won once in eight outings), Leopards’ decision to hound Matano out of office, yet they are eighth on the log left many a football fans perplexed.
Matano was shown the door yet the side has bagged four wins, including triumphs over champions Ulinzi Stars and Rangers FC.

Yakhama therefore will have to put in extra effort to push the team up the table considering that the 12th player will be watching keenly and expecting a turn around.

Even as Yakhama prepares to attend to the wounded Leopards, he should remember that players tend to prefer a coach who indulges them. Yet footballers can’t be trusted to know what is best for them in the long run.

Taking the England squad under Sven-Goran Eriksson and Steve McLaren after him as an example, the side descended into an ill-disciplined rabble and it took the appointment of the uncompromising Fabio Capello to knock the delinquents into shape, a headmaster to unruly children.

Out went mobile phones, in came shirts and ties. Results swiftly followed. For Yakhama, this quality is an alien concept, yet if he wishes to keep his job beyond the end of this season; it is one he needs to embrace.

Unless he is keeping his rage bubbling away under the surface, it seems unlikely. More of the stick, less of the carrot then.

MichezoAfrika covered the unveiling in a report by Denis Machio:- 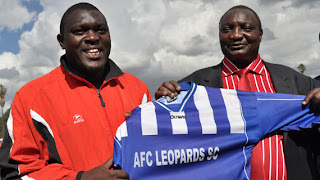 Nick Yakhama was on Thursday afternoon officially unveiled as the new coach at AFC Leopards following the recent dismissal of Robert Matano on Sunday.Yakhama was unveiled and later introduced to the players by chairman Alex Ole Magelo at the City Stadium in Nairobi during the team’s training session.Yakhama makes a comeback to AFC Leopards for the second time in charge as head coach with a handsome record including saving the club from relegation in 2009.Before his new job at AFC, Yakhama guided Chemelil Sugar in the 2010 season saving them from relegation but was fired on Monday this week by the management of his immediate former club Chemelil Sugar on allegations of gross misconduct.Other members of the new technical bench include Eliud Omukiya as assistant coach, Bernard Onyango as team manager, Patrick Ngusale as Physiotherapist and Haggai Azande as goalkeeper’s trainer. The changes take effect immediately and Yakhama will have his first training session with the team on Friday ahead of their match against Bandari FC to be played on 2nd May.Speaking during the unveiling,AFC Leopards chairman Alex Ole Magelo praised the good performance record of Yakhama saying as a top former international player,Yakhama holds all the credentials to navigate the big pressure that comes with a big club like AFC Leopards.“As mandated by the over 6 million fans of the popular club, The AFC Leopards’ executive management is glad to unveil Nick Yakhama as the new head coach of the club with immediate effect. His impressive record and credentials include saving the club from relegation in 2009 and repeating the same feat in 2010 with KPL club Chemelil Sugar. He also managed to win the KPL title unbeaten while at Mumias Sugar in 2004/2005 league.” Said Magelo.Yakhama in an address to the press immediately after being unveiled as the new coach promised to work hard to ensure the team delivers the much needed results that will bring back the glory of the team.Yakhama however hinted at some changes in the playing unit come the mid season transfer window.“This is a great team and we shall do everything to ensure the team delivers the positive results. I call for unity and togetherness for the betterment of the team. “Said the new coach Yakhama.Present during the unveiling were AFC Leopards’ CEO Richard Ekhalie, Duncan Angode and Fredrick Lutta but noticeably absent were the other members of the AFC Leopards’ executive.

You can watch the unveiling here
Supersport then reported:-
Newly appointed AFC Leopards coach Nick Yakhama has promised to transform the club into a winning outfit.

Speaking after he was officially unveiled as the new coach on Thursday, the former Chemelil tactician said he was confident he will win his debut match against Bandari this weekend.
“I will be a lame duck if I can’t deliver. I feel at home with this glamour team and I can assure Leopards fans including those in the diaspora that they will see great changes in the club. I just plead for calm and patience since it takes time but with the support of every stakeholder in the club, I know we shall cross over to the Promised Land as a united force,” said Yakhama.
Club Chairman Alex Ole Magelo said they had settled on Yakhama because of his credentials having saved the team from relegation in 2009.
“He has a proven track record and did great work at leopards before so it was an easy choice to pick him as coach.”
He confirmed Eliud Omukuyia will be the assistant coach while Bernard Onyango will be the team manager. Other members in the technical bench include Patrick Ngusale as team physiotherapist and Haggai Azande as goalkeeper trainer.
Supersport predicts:-
AFC Leopards Vs Bandari (Nyayo Stadium live on SuperSport 9, 2 May 2011)
Having fired coach Robert Matano and replaced him with Nick Yakhama, AFC Leopards wil hope to get back to winning ways whne take on a Bandari side short on confidence. Two wins in eight games means the Coastal side is already feeling the heat with coach Oliver Bango eager to halt the losing streak.
Our Prediction: 2-1
Carol Radull predicts:
AFC Leopards Vs Bandari Monday 4pm
Nyayo Stadium
My Prediction: Ingwe 1 – 1 Bandari
AFC Leopards under returning coach Nick Yakhama will be hoping to bounce back from their 1 – 0 defeat to Congo United last weekend. Although they are playing a Coastal side that’s been doing rather better than their brothers across the road. Bandari have been doing slightly better than Congo, with 2 wins to their name this season. Last weekend however they lost 2 – 0 to an in form Ulinzi side, which isn’t really an embarrassment though. But knowing that their brothers beat Ingwe will give the Kenya Ports Authority side a little bit of confidence. Robert Matano was a force at Ingwe but I’m sure the boys will be breathing easier knowing they won’t be insulted or shouted at anymore. Recently the management of Bandari promised the players incentives if they did well, but apparently that was just hot air for now. The “road-side declaration” still has to be approved by the KPA so I’m afraid no motivation for the boys this weekend.