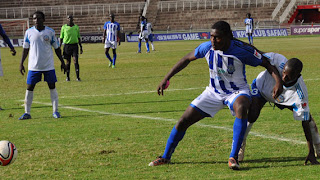 MichezoAfrika features a story by Dennis Machio that states:-
Newly appointed AFC Leopards coach Nick Yakhama received a warm welcome back to the AFC Leopards bench as his boys in blue cruised past visiting coastal outfit Bandari FC 2-0 at the Nyayo stadium on Monday afternoon. A joyful AFC squad led by goal scorer Emmanuel Tostao said they dedicate their win to Yakhama citing his motivation as a big morale booster that contributed a lot to the sweet victory against Bandari.

The win brought back the life in the AFC Leopards family as the fans led by the vibrant Facebook branch fans synchronized to the Isukuti drum beats in an evening marked with celebration and ecstasy.

Thanks to a lovely pass from Liberian Abraham Cokie deep in the midfield, Laurent Tumba drew first blood in the 12th minute when he drove past the sluggish Bandari defenders to drive home beyond an unstable Abdulrahman Swaleh in the Ports’ men gates.

AFC Leopards looked well organized and with better ball possession than has been the case in the last three matches. They had smooth exchanges in the midfield resulting to a second goal five minutes after the half hour mark through teenager Emmanuel Tostao. Tostao easily tapped home a rebound following Tumba’s hard work on the left flank.

A series of shaky goalkeeping from the Bandari keeper Abdulrahman could have cost his team more goals had the AFC Leopards strikers maintained their precision in front of goal during the first half.

After the break, Oliver Msengo seemed to have hit the right points as they came back looking better organized while AFC Leopard’s steam faded off. Coach Yakhama threw in Evans Wandera, Paul Ojiambo and Itubu Imbem for Edward Seda, Hugo Nzoka and Emmanuel Tostao respectively.

In the 75th minute, an Abraham Cokie Corner brought confusion in the Bandari goal area when the keeper failed to punch away the ball but the danger was cleared a few inches from crossing the line.

The result marks the 7th loss for Bandari out of the 9 matches played. They have registered two wins at home against City Stars and Sony Sugar. This is for sure going to draw sulky faces in the club’s management.

After the match, Yakhama attributed the poor coordination in his team towards the final stages to lack of match fitness.

“I have been with the team for three days and I have noted the fitness level of the players needs to be elevated because they fizzled towards the end of the match and gave our opponents an upper hand.” He said.

Bandari coach Oliver Msengo is yet to understand the predicament befalling his team as he has done everything that is needed to ensure his team comes from the woods to register at least three wins in a row.

“Am yet to understand where the problem lies in my team because I think this is nothing to do with training or soccer. It must be something off the field and when we get back to Mombasa we shall sit back with the management to ensure we sort ourselves out.”

Bandari’s next assignment is against Gor Mahia in Nairobi on Saturday.
Supersport features a story by James Wokabi that states:-
Coach Nick Yakhama enjoyed a dream debut as AFC Leopards saw off Bandari 2-0 at Nyayo National stadium on Monday. Laurent Tumba and Emmanuel Tostao found the back of the net in the first half as Ingwe ran out confident winners. The win saw them climb to sixth on the log; above arch rivals Gor Mahia on goal difference.
“I am happy but not satisfied. The boys played well but the stamina levels went down in the second half and its something we have to work on. The only change I made was to ask the boys to possess the ball more and avoid losing possession,” Yakhama told SuperSport.com.
Appointed coach last week for the second time in two years, Yakhama rung the changes bringing Abraham Cokie back to the line up as well as youngsters Edward Seda and Ramadhan Shaban to the middle of the park.
The hosts went ahead on 8 minutes with a well worked goal as Tumba controlled a Hugo Nzangu cross and rifled the ball into the net cuing off wild celebrations in the stands.
The goal almost made it 2-0 five minutes later when Bandari keeper Abdulrahaman Swaleh fumbled the ball but his Hamisi Majepo cleared his shot off the line.
Leopards were dominant and they accreted another fine opening on 21 minutes when Shaban found Tostao in the inside right channel but the striker fired the ball agonizingly wide of the far post.
The second goal materialized on 32 minutes and again Tumba was heavily involved. The Congolese midfielder persisted down the left before crossing for Shaban whose point blank shot was kept out by Swaleh but Tostao was on hand to tap home the rebound from 10 yards.
With the hard done in the first half, Leopards coasted through the second half going close on several occasions but were unable to add onto their tally.
Kenyan Star reported:-
Nick Yakhama made a grant entry back to the  coaching job at the club he lifted out of the nationwide league in 2008 by beating Bandari by two straight goals on his first match in charge.
AFC Leopards who had lost last weekend to minnows Congo United were reeling with the fact that a win was a must if they had to keep track of their title ambitions. After firing Robert Matano and snapping Yakhama from Chemelil Sugar, confidence was high though there was some murmuring from some quarters over the hiring of Yakhama.
Laurent Fabrice started the onslaught for Ingwe as early as the 8th minute after firing from close range benefiting from poor defense after a Ramadhan Shabaan Cross. The recharged Leopards continued with the attack and Hugo Nzangu saw his effort cleared off the line by the Bandari Captain Raphael Okello.
Emmanuel Tostao banged in the second for Ingwe 33 minutes into the game, this time Laurent Fabrice turning into the supplier. Laurent who had a good display on the afternoon made a run on the right leaving the Bandari defense gasping for breath before releasing in a low cross that saw the Bandari keeper Swaleh Abdulrahman save from Shaban Ramadhan before Tostao toasted in the rebound.
AFC took command of the whole first half with nice touches from the midfield totally controlled by Liberian import Abraham Cokie and should have banged in two or more goals before half time.
However in the seconde half, Bandari came back with a spirited fight after the pep talk from coach Bango and took the game to AFC's half. Chrispin Odula and Ali Juma now took charge of the midfield, pinning ingwe into their own half.
The Leopards tried once or twice to hit the dockers on the counter with Hugo Nzoka and Emmanuel Tostao being kept close by Okello and co in the Bandari defense.
The result now sees Ingwe climb to sixth position with 15 points, seven behind leaders Tusker. They are sandwiched between holders Ulinzi and bitter rivals Gor Mahia who both have a similar number of points but seperated by goal difference. The dockers woes worsen as they dip to 15th position with 6 points, just a point above league trailers Nairobi City stars.
The Daily Nation in a story by Sammy Kitula titled Leopards unleash claws, sink Bandari in Nairobi clash reported:
Nick Yakhama couldn’t have asked for a better result on his return at the AFC Leopards helm, than that 2-0 win over Bandari in a Kenyan Premier League match on Sunday at the Nyayo National Stadium.
Laurent Tumba scored after eight minutes and when Emmanuel Tostao added the second in the 30th minute, Yakhama clenched his fist, punched the air and exclaimed, “Yes” as his side leaped three places up to tie fifth with Gor Mahia on 15 points.
From the kick off, the match was played at a frantic pace, with both sides fancying themselves to take the match.
It took little under five minutes before Leopards showed exactly what they can do, when Tostao unleashed a rocket from 25metres, forcing a fantastic save from Abdulrahman Swaleh.
Leopards looked uncharacteristically sturdy and efficient looking at the back, stifling any potential attacking moves from the visitors.
The fluid passing from Ingwe caused havoc for Bandari and it was only going to be a matter of time before the wounded Leopards made the breakthrough.
Just after eight minutes, a clearance was whipped onto the path of Tumba, who shot with fantastic power; proving too much for the goalkeeper as the corner of the net bulged and the stadium erupted.
Tostao added the advantage in the 30th minute after Swaleh punched a Shaban Ramadhan shot.
“This was a very good display from my players. They showed maturity and great form in that win.
It has also come at a very good opportunity as we aim to regain our form,” said Yakhama after the match.
The Table Now:-
Posted by Ingwe Fan at 6:39 PM