Leopards drew 1-1 with Chemelil Sugar with Ingwe coming from a goal down to level through a header by Nicholas Muyoti, who appears on the cover of the Ingwe Fan magazine.
MichezoAfrika has a good report by Dennis Machio.
AFC Leopards on Saturday afternoon was forced to drop two points against a visiting Chemelil Sugar FC in a KPL match played at the City stadium as both teams settled for a 1-1 draw. This was the third match for Nick Yakhama in charge of AFC Leopards since coming back to the side from Chemelil while and  the first match in charge for newly appointed Chemelil coach Edward Manoah.

Chemelil Sugar were the first to draw their guns in the 23rd minute when Milton Kidiga rose above the AFC Leopards’ defense to burry home Willis Ouma’s cross with a powerful header.

AFC almost pulled the quickest response with the Chemelil defense still celebrating their goal but a lone counter attack drive by Okumu ended way beyond target.

Nicholas Muyoti brought back a sigh of relief in the AFC camp when he calmly converted in a similar style in the 43rd minute going up for a powerful free header from a Salim Kinje’s corner to beat keeper Fred Onyango for the equalizer. 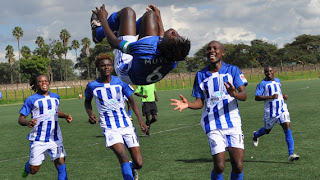 The start of the second period was very scary for AFC as keeper Tiema was forced to make two successive saves to deny a recharged Chemelil their second lead. But mostly, both sides maintained a balanced affair canceling each other in the midfield.

Chemelil suffered a set back when Victor Omondi was sent off by referee Fidelis Wekesa for foul mouth with a second yellow card.

With a man down, AFC capitalized on the deficit to surge their attack and Selenga came close in the 65th minute but keeper Onyango was equal to the task pinning down a hard low drive.

In Nairobi for just a point, Manoah saw the need to beef up his defense line .He made a quick technical change to counter the deficit bringing off striker Milton Kiriga for defender Smith Ouko.He then sealed off the defense and compacted the midfield making it very difficult for AFC to make meaningful passes.

Yakhama on his side threw in two youthful strikers Tostao Emmanuel and Odhiambo Paul but their frequent runs on the wings ended in wasted crosses.

Eventually the match ended in shared points much to the disappointment of the AFC Leopards’ fans who had hoped to collect maximum points from the millers.

“Am disappointed but this is football, their strategy was to get at us first and disorganize our game plan. We live to focus on our next assignment.” Said AFC Leopards’ coach Nick Yakhama.

Chemelil coach Edward Manoah praised the performance of his team for the one point though he was confident of maximizing his points.

“A better result would have been for us to win the match. We had better chances and ball play than our hosts. Am happy for the single point against a good team.” He said.
Supersport reports
AFC Leopards were given a huge scare by ten man Chemelil Sugar before settling to a 1-1 draw in a tension packed league match staged at Nairobi’s City Stadium.

The visitors drew first blood in the 23rd minute when Milton Kidiga brilliantly headed in a nice cross from Willis Ouma beating Leopards custodian Barnabas Tiema all ends up.
Leopards upped their game forcing several fruitless corners but they kept plugging away and got the equaliser when captain Nicholas Muyoti scored off a Salim Kinje corner.
Chemelil were then reduced to ten men in the 61st minute after Victor Omondi was sent off by referee Fidelis Wekesa after committing a second bookable offence.
Leopards will host Sony Sugar next weekend in Nairobi while Chemelil Sugar will be in Nairobi to face Mathare United.
Meanwhile, the Star reports that Coach Nick Yakhama was not impressed with his players:- 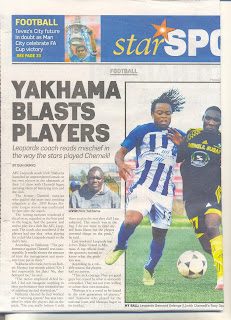