That Thika United play better away than at home is no news to Leopards’ tactician Jan Koops. The two teams are set to lock horns on Sunday evening at the Nyayo National Stadium and the tactician has prepared his players to keep their concentration to their best against an equally lethal side.

“We beat them 2-1 in the first leg but that was history. On Sunday, it will be a different ball game altogether. Thika United play very good football away from home and we expect a difficult game against them.”

“They are very dangerous on counter attacks and to be able to contain them we have to ensure we close them on their spaces to reduce their activity on and off the ball,” says the Dutch trained tactician.

Koops has also said that Paul Were and Victor Ochieng both of whom were injured and missed the last three fixtures have recovered and started training though they are not ready to be fielded just yet.

Leopards will have a chance to go eight points clear at the top of the table though they will have played 21 matches, with second placed Tusker having three less. 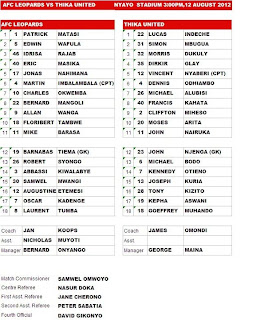 As Coach Jan Koops seeks to open up a good gap at the top of the log, he has decided to maintain 99% of the squad that started against Rangers on Thursday. He will only make one change with Charles Okwemba  coming  in place of  Oscar Kadenge who will start on the bench.

Koops will also employ a different strategy to the one he used against Rangers where he played with five midfielders; three in the centre and two on the wing. This time round, he will play more of the conventional 4-4-2 formation with Wanga and Barasa twin striking.

AFC Leopards have made one change to the side that drew with Rangers FC, for the Kenyan Premier League clash with Thika United.

Kadenge drops to the bench, while Jimmy Bagaye drops out of the squad all together.

Otherwise, it is the usual line-up for Ingwe, with Patrick Matasi in goal, the back four of Edwin Wafula, Jonas Nahimana, Eric Masika and Idrissa Rajab.

Allan Wanga and Mike Barasa will lead the line upfront for the match that will kick-off starting 1500 hrs local time.