Five Star AFC Leopards ran amok on Sunday afternoon in what was a masterclss as they drilled four goals to nothing against Thika United. Charles Okwemba earning his first call in the second leg justified his selection into the squad with his marauding runs that tantalised  the Thika defence. The first goal in a predator’s fashion, heading home a Bernard Mang’oli’s corner kick.

Thika did dominate procession later on with Moses Arita coming close to scoring for the Thika based side. Okwemba’s runs compounded with Floribert Ndayisaba’s master display in midfield did the harm to John Kamau’s side who had no answer to Okwemba’s second goal in the 41st minute courtesy of another Mang’oli’s dead ball. 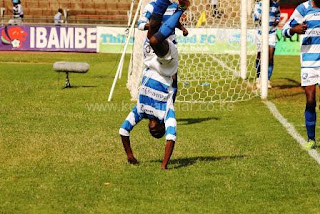 Thika  came on a stronger side in the second half dominating the opening periods of the half. John Miruka had the best chance for Thika in the 50th minute when he beat Jonas Nahimana and Patrick Matasi to the ball but failed to find the net soon after. Coach John Kamau had to sacrifice Miruka for Kepher Aswani but this paid alittle to Thika.

In the 58th minute, LiberianDirdik Glay was booked for a foul on impressive Allan Wanga but the real news came in the 80th minute when Simon Mbugua turned an Allan Wanga’s cross into his own net.

The third goal disjointed Thika United’s defence who later left holes in defence. Floribert Ndayisaba’s pinpoint cross did find Okwemba onside and the experienced midfielder beat Lucas Indeche with a low shot on the near post.

Substitute Laurent Tumba put the icing on the cake in injury time after breaking an offside trap to make it 5-0. Leopards are yet to conceed in the second leg of the KPL.

The takes Leopards 8 points clear, they have 45 points from 22 matches played so far. Thika on the other hand have soaked in nine goals in to matches.

Thika United became a highway of goals as AFC Leopards displayed a five-star performance, winning 5-0 at the Nyayo Stadium in the Kenyan Premier League. 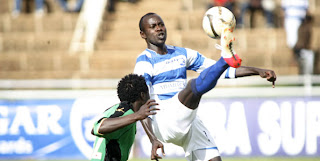 
Ingwe’s Charles Okwemba scored a hat-trick as Laurent Tumba added another and Thika United’s Simon Mbugua scored an own goal as AFC took their points tally to 44. Okwemba scored the first of his goals in the 15th minute, heading home a Floribert Ndayisaba corner and added another in the 30th minute in a similar fashion.

Thika gave as much as they received but were shy in front of goal, coming close many times after some erratic defending by Eric Masika and Jonas Nahimana but were wasteful as AFC led 2-0 at the break. In the second-half, Allan Wanga beat the offside trap and his shot was deflected by Mbugua into his own net.

AFC Leopards on Sunday ripped a youthful Thika United apart beating them 5-0 in a lively premier league match at the Nyayo stadium. Charles Okwemba scored a brace while  Eric Masika and Laurent Tumba got a goal each. Thika's Simon Mbugua scored an own goal to complete a powerful Ingwe rout as the former champions edged closer to the title. With the win, AFC Leopards opened an 8 points gap at the summit of the KPL league table with 44 points.

AFC started the match with a powerful attacking mindset attempting a quick one in the first five minutes though Thika custodian Lucas Indeche was equally agile to stop Wanga.

Charles Okwemba who came in place of Oscar Kadenge scored the first goal for AFC Leopards in the 13t minute, rising above the Thika defenders to head in a corner kick taken by Bernard Mang’oli.

Thika United looked vulnerable in set pieces easily allowing AFC Leopards’ free space in the air. In the 41st minute, Eric Masika had the last touch with a header to score the second for AFC Leopards also from a corner.

The introduction of striker Kepha Aswani by Thika United in the second half injected fresh goal urgency for the youthful Thika United as they improved on their attack. In the 72nd minute Cliffton Miheso delivered a lovely lob that Matasi failed to handle but Moses Arita missed the close chance.

In the 75th minute, AFC Leopards found themselves 3-0 up after Mbugua scored in his own net under pressure from Mike Barasa. Mbugua attempted to cut out Allan Wanga’s well weighted cross from reaching an advancing Mike Barasa but instead he tapped the ball into his own net.

In the final ten minutes, Charles Okwemba added his second and substitute Laurent Tumba completed the rich harvest of goals for AFC Leopards from a counter attack chipping over an advancing Indeche for the 5th.

Miscalculation by keeper Patrick Matasi in injury time almost gifted Thika United a consolation goal but Nahimana was in place to clear the danger before it crossed the line as AFC finished the day with a heavy basket of goals and maximum three points.

The game started on a high tempo, Ingwe mid-season acquisition Idrissa Rajab making a blunder as his intended back pass to Eric Masika was almost intercepted by John Nairuka at the 4th minute.

Thika United’s Dirkir Glay won a free kick after he was fouled just outside at the eighth minute. He stepped up to take the free kick but shot straight into the AFC Leopards wall.

Charles Okwemba opened the scores at the 15th minute powering in a header past Thika United goalkeeper Lucas Indeche after a cross from Bernard Mangoli from the left wing.

Allan Wanga made a good run into Thika’s box in the 17th minute but shot wide with only the goalkeeper to beat.
Thika United moved forward in search of an equalizer and almost got it in the 21st minute, Francis Kahata made a good run in the left wing, but his resultant cross was cleared by Eric Masika.

Moses Arita missed a clear chance to score for Thika United as he headed wide after a perfect cross from the impressive Moses Arita at the 68th minute.

Thika United defender Samuel Mbugua scored an own goal in the 75th minute as he tried to clear a Mangoli long cross to make it 3-0 in favour of AFC Leopards. Charles Okwemba scored eight minutes later after a good long pass by Mangoli. Laurent Tumba finished the job by scoring with a low shot the 88th minute.

AFC Leopards top the KPL table with 44 points from 21 games and face 11th placed KCB on Sunday 26 August in their next game.

A Charles Okwemba brace inspired AFC Leopards to a 5-0 whipping of Thika United in a Kenyan Premier League clash played at Nyayo Stadium on Sunday.

The win pushed Leopards to 44 points; eight clear off second placed Tusker and edging them closer to a first league title since 1998.

In form Okwemba drew first blood for Ingwe heading home from close range from a corner to beat Thika's keeper Lucas Indeche in the 16th minute.

Defender Eric Masika increased the goal tally in the 41st minute as he chested the ball past Indeche from a Charles Okwemba assist to give Leopards a two gaol cushion just before the break.

The second half was not different despite the introduction of Thika United's top marksman Kepha Aswani as Leopards continued to torment the Thika defence with Allan Wanga and Mike Baraza in the thick of things as Indeche was forced to pull acrobatic saves.

Thika defender Simon Mbugua conceded an own goal in the 76th minute as he misjudged a cross from Allan Wanga sliding the ball into his own net to give Leopards the third goal as the Ingwe fans became ecstatic singing and dancing.

Okwemba completed his brace in the 86th minute as he placed the ball calmly past an advancing Lucas Indeche to give Leopards the fourth goal.

Substitute Laurent Tumba sealed the massive win for Leopards with a fine shot that beat Indeche in Thika's goal on the stroke of full time.

The loss was the second massive for Thika United having been beaten 4-1 by Sofapaka a week ago.

AFC Leopards on Sunday made a crucial break in the race for the Kenyan Premier League title when they thrashed Thika United 5-0 to open an eight point gap between themselves [Leopards] and second-placed Tusker.

Leopards overwhelmed an awestruck Thika who meekly capitulated, even scoring an own goal to add to the deluge from Charles Okwemba (a brace), Eric Masika and Laurent Tumba.

Even though Tusker [36 points] have three matches in hand, from which they could earn points and take a point’s lead over Leopards [44 points], Leopards clearly sit in comfort.

The Brewers who were absent from League action during their recent poor appearance at the Cecafa Kagame Club Cup tournament in Tanzania, must first overcome Sofapaka, Mathare United and Sony Sugar to close the gap.

Leopards showed too much commitment and skill by several players to run off the pitch a Thika United side that may seem, by the score line, not to have tried.

The usual danger men for Leopards upfront, Mike Baraza and Allan Wanga, played their part but that they were not the ones on the sheet in such a high scoring match reminded everyone how strong in resources Leopards are.

Charles Okwemba, usually a contented creator from the middle of the park, this time found himself with the space and aimed accurately for a brace. First, he powered in a header after 15 minutes from a Bernard Mang’oli ball from the left flank.

Then when Leopards were already 3-0 up, Okwemba converted for the fourth and his second of the day.

Eric Masika had sent Leopards 2-0 into the break with a 41st minute goal from a goalmouth scramble, chesting in the final ball from Okwemba.

Thika United tried everything to steady their ship and claw their way back into contention, including bringing in Kepha Aswani, their goal scorer who was impressive in the first half of the season.

But Thika would continue struggling, the front running of Wanga and Baraza always difficult to contain.

After Okwemba made it 4-0, the scoring would not end until almost in the final whistle when substitute Laurent Tumba made it 5-0.

Leopards coach Jan Koops said his defence had continued to perform brilliantly, not letting in a single goal in six fixtures -- the entire second leg -- the last being in the 1-1 draw with Sony Sugar on June 20.

He said players’ competition because of a good “bench” had made everybody work harder. 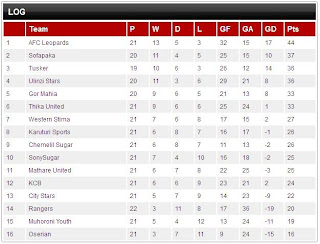