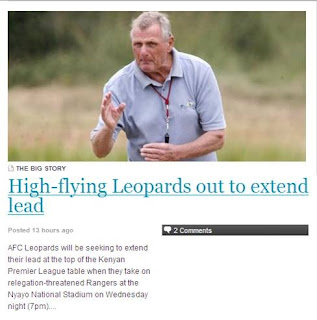 AFC Leopards will be seeking to extend their lead at the top of the Kenyan Premier League table when they take on relegation-threatened Rangers at the Nyayo National Stadium on Wednesday night (7pm).

Leopards have won four out of four second leg games and are expected to have an easy afternoon against the 15th-placed team.


The 13-time champions prepared for tonight’s game with a 2-0 win over Mathare United in the FKF Cup on Saturday. New signing Floribert Ndayisaba will make his league debut and is likely to be fielded in the midfield alongside Martin Imbalambala, with Mike Baraza and Allan Wanga upfront.


Lethal winger Paul Were could miss the game as he recovers from an ankle injury but coach Jan Koops is optimistic of good results.


“Were has been in a good form since he joined us and we’ll miss him. But I have a big squad which can do the job,’’ said Koops.

His opposite number, Rangers’ James Nandwa, was guarded in his comments.


“It’s not going to be easy against Leopards. They are on a roll and we have to be at our best,’’ said Rangers coach James Nandwa.


“They (Leopards) are playing good football and getting the results and that’s why they are at the top. We are just on the recovery path and I hope we can get another three points,’’ he added. Leopards mauled Rangers 6-2 in the first leg in Mumias but Nandwa says this time it will be a different ball game.

“We have strengthened our squad. We lost so many players in the June transfer window but our new players are doing a good job.’’


With 40 points, a win give Leopards a major boost as they seek to reclaim the title they last won in 1998. A draw will encourage the chasing pack.

MichezoAfrica reports:-
AFC Leopards Coach Jan Koops will be leaving nothing to chance as he will field a full strength squad to tame the Rangers at Nyayo Satdium from 7.30pm on Thursday. AFC will be seeking to cement their lead at the top of the table.

Coach Jan Koops will use a 4-5-1 formation, opting to clog the midfield and deny Rangers a chance to penetrate through the midfield.Having only one defensive minded midfielder, Koops will definitely be going for a fully fledged attack minded play.

Patrick Matasi wil be in goal for the Leopards and the defense will generally be unchanged. Edwin nWafula will play on the right, Idrissa Rajab on the left while Jonas Nahimana and Erick Masika make the central defense partnership.

In midfield, Oscar Kadenge and Mike Barasa will play the right and left wings respectively. With Barasa being employed as an attack minded winger, He will once in a while join the lone striker Allan Wanga, giving the left back Idrissa Rajab space to run on the wings.

Burundian skipper Floribert Ndayisaba, Kenyatta University student Bernard Mang’oli and Martin Imbalambala will command pace in midfield.  Imbalambala the captain will play a deeper role with Tambwe and Mang’oli playing infront of them.

Koops will not lack options on the bench with Jimmy Bagaye and Laurent Tumba being an attacking option, while Amon Muchiri and Abbas Kiwalabye being possible defensive options.

Rangers FC defender Tom Tass Onyango will undergo a late fitness test to ascertain his situation ahead of the Wednesday 8 August tie between his team and AFC Leopards at the Nyayo National Stadium.


The former Oserian and Karuturi Sport defender hurt his ankle in the team’s last league outing against SoNy Sugar, which Rangers won 1 – 0 and is still struggling so the club’s team manager Willis Waliaula confirmed his situation will be analysed on Tuesday, just a day before the game.

He has started light training and we cannot confirm as yet whether he will or will not feature in the AFC Leopards game on Wednesday. We will observe him on Tuesday then pass a decision on him, hopefully he will be ready for the midweek encounter, Willis told futaa.com. 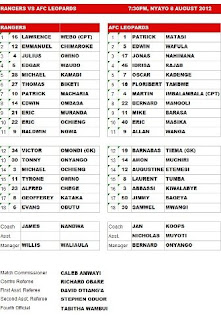 A Kenyan Premier League tie between Rangers FC and AFC Leopards league tie that was planned to be played on Wednesday 8 August 2012 failed to kick off at 1930 hrs. as planned due to a flooded Nyayo National Stadium surface.

The kick off for the tie had naturally been pushed back by close to half an hour as an earlier tie, a Top 8 semifinal reverse tie between Ulinzi Stars and Sony Sugar had been interrupted by heavy rains that pounded the City of Nairobi from 1800hrs, or thereabout.

The Top 8 tie had to be stopped at the 72nd minute and after close to 20 or so minutes continued to its conclusion.

Referees for the Rangers – Leopards tie, after inspection of the surface, declared the pitch unplayable and confirmed that the pitch would not take off.