While visiting the flower town of Naivasha as Leopards went to play Karuturi Sports, tragedy struck as three Leopards fans were involved in a road traffic accident after the match echoing the other tragedy last year in October.
Supersport carried the original story that began:-
One AFC Leopards’ fan died and ten were seriously injured when the vehicle they were travelling in was in involved an accident on Saturday. The fans were enroute to Nairobi after watching Leopards vs Karuturi league match when the pick-up truck they were travelling in collided with a trailer at the Mai Mahiu/Naivasha roundabout. The injured are currently admitted at Naivasha District Hospital with four believed to be in critical condition.
Later the story was updated:-
The death toll in the AFC Leopards road tragedy increased to three after two more fans succumbed to death in Naivasha. Club acting secretary General Duncan Angode who spent the night at the Naivasha District Hospital confirmed to SuperSport.com that the death toll now stands at three.

The official website of the club also broke the news:-

NTV carried the story that can be viewed on Youtube here

In a tribute to the three true Leopards, we bring you some snippets about them.


Ben Amuko was at the match and after the match he had run and collected the banner and was running on the pitch proudly showing it off. 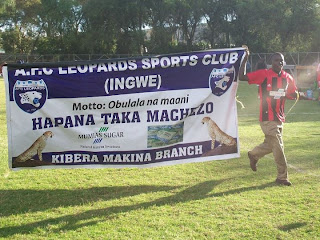 He had teasingly asked fellow fans during the match why they were wearing the home colours of Leopards when they knew Leopards was playing away. He had worn the away jerseys that had been used by the club in the first leg of the season.


As Leopards coach Jan Koops was being interviewed, he stood behind Koops with the banner. 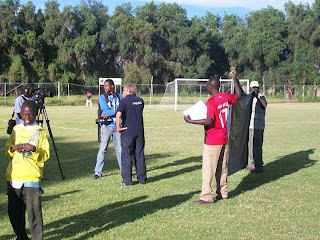 Hardly an hour later, he was involved in the car crash.

Duncan Asila had posted on the Leopards Face Book Branch wall a post about his arrival in Naivasha. He was seeking directions. 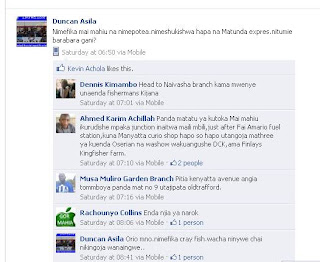 Asila was leopards through and through and a quick look at his Facebook profile bears this testimony. 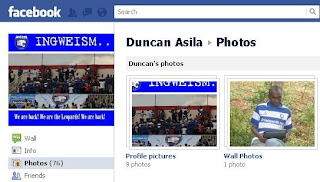 His profile photo was a banner created by this blogger on which the words INGWEISM were written and fans pictured doing the poznan as a way of telling all and sundry that the Leopards were back!


Aineah Maliotso was also a true Leopards fan. His profile picture showed him in his replica jersey of Leopards with his name AINEA. 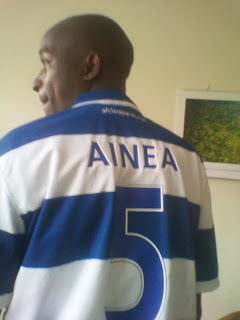 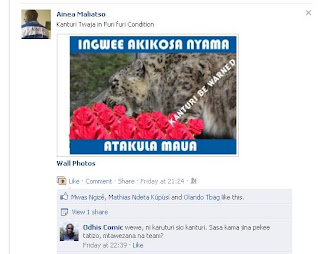 As Ingwe Fans, we can only use this moment to reflect on the words of a fellow Ingwe fan  who said:
I once heard someone ask: When it is your time to go, where will you be coming from? And yesterday I saw some people in a shoot out in Buru Buru whose answer was probably: from a robbery. But here, yesterday, we had people who were coming from a football match to watch they team they loved, the team they travelled to see, the team they were still happy about even after the barren draw. Sometimes we misuse the word 'diehard fans' and when people die after a match (or before a match like some fans last October), that is when it hits us what a fan who is Leopards to death really is! Life is precious and I read somewhere today that real fun should not turn into a funeral. It is a lesson to all of us. To our players to play matches as if it is a good send off to the fans; to the fans (and the EC are also fans) to treat their fellow fans as one family, instead of the usual bickering over what branch you belong to; and to all of us to remember, that though we are blue and white, occasionally some black days will cloud our days. Let us stand with our fellow brothers and sisters who have lost loved ones and continue practising what our mottos tell us. These fans who passed away are Ours Forever and at this time, we have to be united as fans, sponsors, EC, playing unit and technical bench because, unity is strength (obulala na amani)!