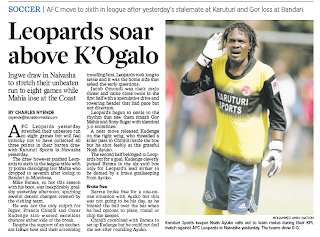 Charles Nyende of the Sunday Nation reported:-
AFC Leopards on Saturday stretched their unbeaten run to eight games but will feel unlucky not to have collected all three points in their barren draw with Karuturi Sports in Naivasha.
The draw nonetheless pushed Leopards to sixth in the league table with 37 points, dislodging Gor Mahia who dropped to seventh after losing to Bandari in Mombasa.
Leopards’ celebrations were, however, dampened by the death of one of their travelling fans following a road accident.
According to club organising secretary Timothy Lilumbi, six fans were admitted at the Naivasha District Hospital in critical condition after the vehicle they were travelling in collided with a lorry at Mai Mahiu on their way back to Nairobi.
One later died in hospital. AFC’s Francis Chinjili, who was in the same vehicle, miraculously escaped without a scratch.
During the game, Mike Baraza, so hot this season with his boot, was inexplicably goal-shy, spurning several decent changes created by the visiting team.
He was not the only culprit for Ingwe. Francis Chinjili and Oscar Kadenge also wasted excellent chances either side of the break.
Despite the support of an exuberant Isikuti beat and their screaming travelling fans, Leopards took long to settle and it was the home side that asked the early questions.
Jacob Omondi was their main threat and he came close twice in the first-half with a speculative drive and towering header that had pace but not direction.
Leopards began to settle to the rhythm that saw them smash Gor Mahia and Sony Sugar with an identical 3-0 scoreline.
A neat move released Kadenge on the right wing, who threaded a killer pass to Chinjili inside the box but he shot feebly at the grateful Noah Ayuko. The second-half belonged to Leopards but for a goal.
Kadenge cleverly picked Baraza in the six yard box only for Leopard’s lead striker to be denied by brave goalkeeping from Ayuko.
Baraza broke free for a one-on-one situation with Ayuko but this was not going to be his day, as he blasted the ball over the bar when he had options to place, round or chip the keeper. Chinjili well combined with Baraza to set up Kadenge but he could not find the net after rounding Ayuko
MichezoAfrika had the story:-
Pre match favorites AFC Leopards squandered three open chances on Saturday to share points with their hosts Karuturi Sports in a KPL match played in Naivasha at the Karuturi Sports grounds. 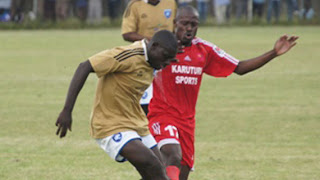 Despite the draw, AFC Leopards for the first time this season boasts of a better placing on the KPL league table as they leap frog a frustrated Gor Mahia to the 6th spot with a better goal aggregate than their in-laws Gor Mahia who succumbed to a choking 1-0 loss to Bandari in Mombasa on the same day. Both teams have 37 points and have a date on Thursday 20th October in the FKL Cup semi finals.

AFC started the match on a pulled back formation studying their opponents’ character. Both teams played more of possessive soccer staying shy of each other’s goal mouth in the dull first period that lacked fireworks.

Come the second half, AFC switched gear to a more offensive attack mode creating dangerous chances but Karuturi keeper Noah Ayuko remained on top of the game to deny them penetration to the nest.

Baraza came close in the 54th minute when a long ball from Matasi found him well positioned but his final touch went above the bar. Three minutes Later, Oscar Kadenge had the best chance of the day cleared inches away from crossing the line after he beautifully rounded keeper Ayuko.

After the match, Karuturi Coach James Nandwa told Michezoafrika.com “ It was a game of lost chances, both teams played well and I must give AFC Leopards credit for pinning us down in the 2nd period. We wanted the win but it is too late to reverse time, we will stay content with the single point.” Said Nandwa
Posted by Ingwe Fan at 9:51 AM