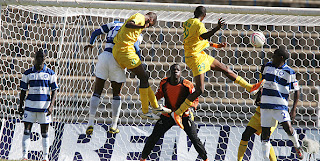 The Daily Nation reports:-
AFC Leopards star Mike Barasa scored from the spot as he not only gifted his club a deserved 2-2 draw against Mathare United at Nyayo National Stadium but also broke away as the Kenyan Premier League top-scorer with 11 goals.
In the Leopards versus Mathare tie, Andrew Tololwa and George Ochieng gave the Slum Boys the lead that lasted up to half-time but an own goal by Llyod Wahome and Barasa’s spot kick ensured the teams went home with a point each.
Leopards’ Oscar Kadenge had the first chance of the game in the fourth minute but his shot went wide. Mathare would however take an early lead when Tololwa headed in a Kevin Kimani corner.
Despite pulling out Salim Khamis with an injury, Leopards coach Jan Koops could only watch as his side conceded their second goal after George Ochieng scored with a 30-metre strike in the 35th minute.
The Standard reports:-
His Luhya name — Matasi — translates to "rags". And, in almost a cruel twist of fate, AFC Leopards goalkeeper Patrick Matasi might have felt like covering himself with a heap of tattered robes during a first-half display that gifted Mathare United a 2-0 lead.
But, thanks to a Lyod Wahome own goal and Mike Baraza’s brilliant penalty, Matasi will have a stay of execution as AFC Leopards drew 2-2 with Mathare United at Nyayo Stadium, on Sunday.
Having knocked off Barnabas Tiema from Jan Koops’ pecking order, Matasi who was playing second division football last season, has seemed destined for greater things what with a call-up to national team, Harambee Stars. For those who cared to review his role in Gor Mahia’s goal in the FKL Cup semi final mid-week, they may have had some reservations going into yesterday’s match.
And true, it did not take long as Andrew Tololwa headed Mathare United in front after nine minutes off Kevin Kimani’s corner without Matasi twitching a muscle. But if he would argue his centre-backs Jonas Nahimana and Martin Imbalambala are equally culpable, the spectacular fashion with which he let in Tololwa’s innocuous 50-yard free kick would leave his prosecutors with enough ammunition.
On the day AFC Leopards’ afternoon had threatened to implode, a point would be more than welcome.
MichezoAfrika reported:-
AFC Leopards staged a spirited second half comeback to secure a 2-2 draw with Mathare United in an entertaining Kenyan Premier League match at Nyayo Stadium on Sunday .Andrew Tololwa and George Ochieng gave the slum boys the lead that lasted up to half time but an own goal by Llyod Wahome and a spot kit by Mike Baraza ensured the teams went home with a point each.
AFC Leopard’sOscar Kadenge had the first chance of the game in the fourth minute but his shot went wide.
Mathare took an early lead when Andrew Tololwa headed in Kevin Kimani’s corner. The goal seemed to have caught AFC Leopards offguard as they plaed in comparison to their opponents. Kimani Kimani’s  free kick  was saved on the edge by keeper Patrick Matasi and the Mathare skipper followed it up with a hard shot that Matasi spilt but recovered quickly before further damage could be done.
AFC coach Jans Koops was forced to pull out Salim Khamis who got injured and in his place came Jimmy Bageya.
In the 35th minute,George Ochieng extended the lead for  Mathare with his debut goal, a 50 yard strike that beat Matasi who was off his line.
Francis Chinjili  had the last first half effort but his cross floated in  the Mathare box with no player to connect. The teams then went to the break with Mathare still two goals up.
Immediately after the half time, Coach Koops introduced Brian Masiolo for Francis Chinjili but it was first half substitute Jimmy Bageya who got the first opportunity to pull one back but his shot was saved by Mathare keeper Joseph Ruto.
As the momentum swung  in favor of AFC Leopards ,Jimmy Bageya lead another  offensive and his final shot hit Mathare United defender Llyod Wahome for an own goal but the short Ugandan still gor credit for the goal.
Minutes later  the hard working Jimmy Bageya went down inside the box thereby  winning  AFC Leopards a penalty that Mike Baraza easily converted. Baraza later picked an injury and had to be stretched out. Joseph Okumu came in his place.
As the match neared the end, Mathare United’s Jesse Were would have been a hero had his 76th minute header gone in. AFC Leopards went on finish the match the better side but never managed to score another goal.
The draw was the 12th for Mathare United this season, a feat that has surely earned them the “draw masters“ tag.For AFC Leopards,this was their ninth game game in a row to go unbeaten.


Lloyd Wahome scored an onw goal while Mike Barasa converted a penalty in the second half to ensure Leopards go home with at least a point after coming from two goals down. Andrew Tololwa and George Ochieng had given Mathare the lead in the first half. This is the second time in a span of less than two weeks that Mathare have given up a comfortable lead but were lucky this time around not to loose.
The “slum boys” had dominated the entire first half keeping possession to themselves while AFC leopards did the chasing. Andrew Tololwa opened the scores early in the 7th minute heading in Kelvin Kimani’s corner. Keeper Patrick Matasi had a howler in the 34th minute allowing George Ochieng to increase Mathare’s tally. Ochieng had taken a freekick deep in the midfield and Matasi came surging to collect the ball from the air, and with no opposition, he let the ball slip through his fingers for the second goal.
Coach Jan Koops was forced to make an early substitution with Salim Kinje being stretchered out injured and in cam Jimmy Bagaye. AFC Leopards tried hard to press Mathare to at least reduce the deficit but were too wasteful with the ball, losing possession easily.
Come the second half, Coach Koops pulled out Francis Chinjili who seemed to be having a bad day in office and brought in Brian Masiolo. Three minutes from the restart, Jimmy Bagaye sounded the first warning to Mathare, forcing keeper Ruto to save his shot from inside the 18 yard area for an unused corner.
Mathare needed to add more pace and creativity into the match as the Leopards players were constantly knocking in their half. Coach Salim Ali pulled out the goal scorer Tololwa bringing in the speedy Jacob Kelli.
As Leopards upped the pressure upfront, the goal finally came with Lloyd Wahome banging the ball into his own net. Mike Barasa had brought in a cross from the left and Jimmy Bagaye surged towards the ball. Keeper Ruto came out of his line to try and collect the ball with Wahome stretching to clear the ball, but ending into his own net.
Mathare midfielder Simon Mburu made a return from his three month injury coming in the 75th minute for Tairus Omondi. His introduction did not make things better for Mathare as just few minutes later, they conceded the second goal from Barasa’s Spot kick, Jimmy Bagaye had been brought down in the area after a fine run on the left and the referee pointed straight to the spot. Barasa sent keeper Ruto the wrong way but in the process pulled a hamstring. He tried continuing with play but could not go on and was replaced by Joseph Okumu, playing his first match after a long time.

KPL website reported:-
AFC Leopards recovered at the National Stadium on Sunday to force a 2-2 tie and frustrate Mathare United who needed victory more in order to create a gap between themselves and the relegation cut-off. The 13th –placed Mathare are now on 30 points, but need more to be sure of staying ahead of No.14 Nairobi City Stars [25 points], the last team before the drop zone occupied by Bandari [24] and Congo United [200 respectively.
Mathare United’s 2-0 lead inside 35 minutes was perfect platform to challenge for three points, but their poor record in protecting leads came to haunt them.
On previous occasions, United have let similar comfortable situation turn into agony; the spectacular being their most immediate past game where their swapped their 2-0 lead with a 3-2 defeat by KCB.
Stand-in captain Kevin Kimani floated a perfect corner kick into the box for Andrew Tololwa head in and give Mathare United an eighth minute lead. United, as usual looked enthusiastic and capable to score more.
Kimani had a fine long range crack at Patrick Matasi in the AFC Leopards goal in the 19th minute. When the lead stretched to 2-0, however, it was from an incredible misjudgment from Matasi a Kenya squad trialist. George Ochieng’, one of the Mathare United’s four men making a rare start, took a 50 metre free-kick and perhaps he had already noticed that Matasi was a few metres off his line. Ochieng’s easy floater flew over Matasi and when it started dipping, the Leopards ‘keeper could only put his fingers on it before it hit the back of the net.
Leopards replied on 60 minutes, Mike Baraza attacking with speed on the left flank and had Jimmy Bageya bearing in on the box with a possible connection. In an effort to turn the ball to for a corner, Lloyd Wahome’s touch, before Bageya could reach the ball, knocked it in past Mathare goalie Joseph Ruto.
Bageya, a first half substitute for injured Salim “Kinje” Khamis, was continuously menacing with his usual speed and was inevitably brought down in the box. Mike Baraza stepped up to take the penalty in the 68th minute for his 11th goal of the season, taking the lead in the hunt for the top scorer’s ‘Golden Boot’ award.
TEAMS:-
AFC LEOPARDS - 1. Patrick Matasi; 5. Edwin Baraza, 8. Laurent Tumba, 4. Martin Imbalambala (captain), 17. Jonas Nahimana, 22. Bernard Mang’oli, 27. Oscar Kadenge, 10. Charles Okwemba, 15. Francis Chinjili (7. Brian Masiolo, 46’), 18. Salim “Kinje” Khamis (50. Jimmy Bageya, 38’), 11. Mike Baraza (16. Joseph Okumu, 75’) Reserves not used - 34. Abel Omuhaya, Gk; 6. Nicholas Muyoti, 26. Robert Syongoh, 30. Samuel “Misse” Mwangi. Scorers - 17. Lloyd Wahome (60’, own goal), 11. Mike Baraza (68’, penalty) Coach - Jan Koops [The Netherlands]
MATHARE UNITED - 1. Joseph Ruto; 13. Athman Buki, 3. Kennedy Ayong’, 17. Lloyd Wahome, 6. George Ochieng’, 4. Dennis Nzomo, 29. Andrew Tololwa, 5. Geoffrey Shikanda, 26. Edwin Oduor (25. Jesse Were, 65’), 12. Tirus Omondi (8. Simon Mburu, 71’), 22. Kevin Kimani (captain) Reserves not used - 16. Raphael Omondi, Gk; 18. John Odhiambo, 19. Elvis Nandwa, 7. Vincent Okello, 7. Jacob Keli
Scorers - 29. Andrew Tololwa (8’), 6. George Ochieng’ (35’) Coach - Salim Ali
Referee - Richard Obare, Assistant ref - David Sagero, Asst ref - Leonard Onyiego, Reserve ref - Hajji Adede, Match commissioner - Daniel Githaka
Posted by Ingwe Fan at 11:14 AM