Sony Sugar beat Leopards 2-1 in the reverse encounter. How will the Leopards fare in Awendo's Green Stadium?
Supersport.com has the story of Sony coach warning the Leopards. Collins Okinyo writes:-
Sony Sugar coach Francis Baraza has warned AFC Leopards to brace themselves for tough battle when they arrive in Awendo for their league clash on Saturday.
Sony Sugar are inform with three consecutive wins beating Gor Mahia, Thika United and Karuturi Sports at their backyard to climb to seventh with 32points.

“We definitely respect AFC Leopards as one of the big teams in the league but they should be worry because on the pitch it will be a different story.”
“I know Leopards are in form currently but I am definitely happy that our fans back at home have been very instrumental in our rise and I know they will back us to the hilt as we fight for the three points.”
“We want to finish the league among the five top teams and my only injury worries are George Amayo and Victor Otieno who are nursing ankle injuries,” he added.
Sony however welcome striker Isaiah Omondi who last played against Western Stima, Sichai Kizito who has had a long layoff after suffering a knee injury in the first leg and Justine Monda.
AFC Leopards are currently tenth on the log with 30 points and a win would see them leapfrog the Awendo based side. 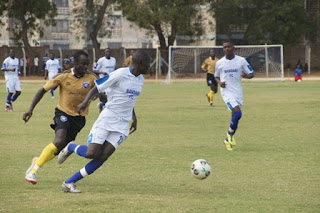 Kenyanstar has reported that Mike Baraza is doubtful for the match though he has resumed training.Timothy Olobulu writes:-
AFC Leopards striker Mike Barasa started training today after spending the last three days recovering from an accident he was involved in on Saturday. Barasa trained lightly with AFC leopards as they prepare to play Sony Sugar in a KPL tie on Saturday.
"I trained lightly today, just running around and stretching. I removed the neck brace yesterday and I underwent some physiotherapy and massage on the neck because of some muscles which were strained. Now I am OK and I thank God for that", Barasa told Kenyanstar.
At the same time, he says that he is not yet sure whether he will feature in the Sony match adding that he will examine the state of the response of his body after Thursday's training and make a decision.
"I can not say now whether I will play or not. I will train again tomorrow and I will examine myself. If the body will have recovered, then I will play but if I will still feel that I am not ready, I will not force myself into it. I will just relax and wait for the next match. For Harambee Stars, I will join camp on Monday, they gave me the whole week off", he adds.
Barasa is currently the second best goal scorer in the league with nine goals, with Moses Arita leading the log with 10 goals.

Nairobi Star have a story about Aluvisia filling the shoes of Baraza. The story by Francis Wadegu reports:-


Former Tusker forward Silas Aluvisia is ready to step in and fill the big gap left by the absence of club top scorer Mike Barasa who suffered a minor injury in a car accident last weekend. Aluvisia, who has had to contend with a place on the bench at Leopards for the better part of this season, is optimistic that the injury to the striker, who has notched nine goals in the league so far, could be an opportunity for him to shine.

“We wish Barasa a quick recovery because without a doubt, he is our main man in front. But for me, this is chance to prove that I can also merit a place in the first eleven and if given the chance by the coach, I will take it on both hands,” said the striker. Leopards who are hoping for a top five finish to the season after a poor first leg left them in the lower end of the league will travel to Awendo where they will face Sony Sugar hoping to climb above their opponents.


Sony Sugar have managed three consecutive wins in their backyard helping push them up to seventh on the log with 32 points.

Sony’s Hugo Nzoka has been the man to watch leading their resurgence but on the other hand Leopards have been in good form themselves with coach Jan Koops solidifying the team’s performances.

They might have to do without talisman Mike Baraza who is recuperating from a car accident suffered last week.