The King of Assists

Statistics. You can do without them and you can’t do without them. There are those who see statistics as an American thing that was brought to keep Math teachers happy and create jobs for some research assistants.
Yet statistics are helpful in the modern game as they help coaches and recruitment officers make decisions that are based on sound analysis of player’s performances. Football is about analysis and thought and nothing speaks analysis more than stats.
The modern game needs an analysis of fitness levels of players; and it is in this context that coaches can tell which player is the fastest because if you passed the ball to a player who isn’t fast, chances are that the opposing team will reclaim possession.
How far can Imbalambala throw the ball for instance, can determine whether certain positions are worth taking the Rory Delap throw in.
An article by Tim Adams appearing in the September 2011 edition of the magazine Esquire  and titled ‘Sport by Numbers’, tells the story of Opta.
When Aidan Cooney first read Moneyball in 2003 he sent it to every one of the 20 managers of (English) Premier League clubs. He did not get one response. Cooney is the chief executive of Opta, and in 2002 he set out to transform the way we understood our national game with a team of one. When they first went to newspapers with the suggestion that football analysis might be a little more scientifically rigorous, selling stats, they were told in no uncertain terms that there was no desire "to Americanise sport" in Britain. Opta now employs 100 staff across Europe analysing data on matches. It supplies most of the Premier League clubs and nearly all of the bookies in the land with statistics. The newspaper editors were wrong.
Close home, there are attempts by Facebook Page 89:59 to do what Opta does though the analysis of the specific games has been hampered perhaps with lack of staffing and the requisite technology that Opta has at its disposal.
Other stats that we come about are the usual Supersport television half time stats that come on to our screens can help a coach identify what areas need to be tweaked. During the match we had with Gor Mahia for instance, the half time stats showed that Gor Mahia was fouling more than the Leopards were (13 to 6). 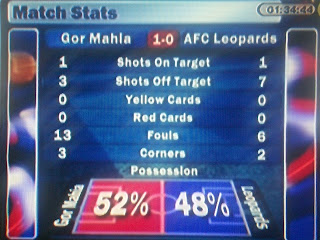 That is a stat that one can use to gain advantage in getting free kicks near the goal area as long as the ball is pushed forward.
Possession stats also help the coaching staff know where they could utilize the information. If the possession is in the opposing teams territory, then a substitution can be made that comes to take advantage of the stats.
One of the stats that Ingwe Fan is interested in, is the statistic of who made an assist.
According to Wikipedia, an assist in football is a contribution by a player which helps to score a goal. This could be in the form of the pass to the player who scores, or if the goal comes from a direct free kick or a penalty, then the assist is credited to the player who won the free kick or penalty, and if a goal is scored from a rebound, then the player who hit the ball that was ‘spat’ is the one who is credited with the assist.
From our research, we have noted that though Mike Baraza is the leading scorer of the twenty two goals scored by leopards this year, the players who have made the contributions to the goals by providing the assists are quite a different statistic.
In the order of the goals scored by Leopards, the assists are listed in bold:-
1. Brian Masiolo, Joseph Okumu, Salim Kinje
2. (corner Selenga), Douglas Okumu, Joseph Okumu
3. Joseph Okumu, Salim Kinje, Brian Masiolo
4. Hugo Nzoka, Evans Wandera
5. Emmanuel Tostao, Itubu Imbem
6. Demonde Selenga, Hugo Nzoka
7. Martin Imbalambala, Hugo Nzoka
8. Shaban Ramadhan, Laurent Tumba
9. Laurent Tumba, Shaban Ramadhan, Emmanuel Tostao
10. (Corner Milton Milimu) Nicholas Muyoti
11. Salim Kinje, Silas Aluvisia
12. (fouled Francis Chinjili) Jonas Nahimana
13. Charles Okwemba, Collins Kisuya
14. (fouled Charles Okwemba) Brian Masiolo
15. Charles Okwemba, Mike Baraza
16. Brian Masiolo, Mike Baraza
17. Salim Kinje, Jimmy Bagaye, Mike Baraza
18. Emmanuel Tostao, Oscar Kadenge
19. Charles Okwemba, Mike Baraza
20. (free kick Charles Okwemba), Laurent Tumba
21. Salim Kinje, Mike Baraza, Oscar Kadenge
22. (fouled Bernard Mangoli), Collins Kisuya
In our analysis, we have taken note of some of the plays that contributed to the goals. Goal Number 16 for instance was scored against Gor Mahia and involved a cross from Masiolo which was controlled by Baraza before he fired in. One may be tempted to think Baraza assisted himself!  Goal Number 19 against Sofapaka was clearly an over hit pass by Okwemba which was then parried into Baraza’s path by the Sofapaka goalie; however, for purposes of checking the path of the ball, we have considered the Leopards players only.
From the above, it shows that the King of Assists is Charles Okwemba who is currently way ahead with 5 assists.
5 assists - Okwemba
2 assists - Tostao, Ramadhan, Kinje
1 assist - Selenga, Baraza, Chinjili, Masiolo, Nzoka, J. Okumu. D. Okumu, Milimu, Bagaye, Mangoli, Imbalambala


For us Ingwe Fans, it is also a wake-up call to always remember that though one may not score a goal, he may be making a huge contribution on the pitch which some of our local journalists do not wish to keep tabs on, preferring instead to concentrate on the English Premier League.
Some say that statistics are like mini skirts – they give us good ideas but hide the most important thing. The important thing is that football is a team sport which is emphasized with players who will go to celebrate with the player who provided the assist that leads to a goal.
But each player has to play his part on the pitch so that when the most important statistic of a match is counted, then the cumulative happiness will be felt all around. The most important stat is of course the result.
Posted by Ingwe Fan at 3:46 PM