Fresh from the 3-1 loss to Gor Mahia, Leopards get a chance to redeem themselves tonight in the only KPL match played this midweek. 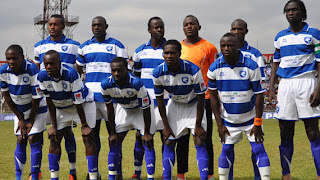 Carol Radull of The Star predicts a 1-1 draw


My Prediction: AFC 1—1 Stima
This is one of the forced derbys that I was talking about. Even though Leopards are a Nairobi team, this is known as the “Western” derby because both clubs draw the majority of their support from the Luhya community. So it’s a baby derby that will grow over the years.
The interesting character in this match will be Francis Chinjili. He left Stima in June to join AFC and it will be interesting to see whether he scores against his old club.
I have a lot of respect for Stima coach Henry Omino. He did his club proud by reaching the final of the Top 8 tournament and almost won it.
Even if AFC beat Gor tomorrow, (sorry....) they will still be four points behind Stima. Stima were back to winning ways last weekend, beating Congo 1-0 after stumbling in the league for a few weeks. This will be an interesting game and something to look forward to after the high of tomorrow’s game.
Collins Okinyo of Superport predicts a 2-2 draw
The midweek encounter comes barely four days after Leopards’ 3-1 loss arch rivals Gor Mahia.
AFC Leopards will be seeking to quickly forget the humiliation with a string performance against Western Stima.
The visitors are in good form having beaten Congo United 1-0 last week. They also boast of a good record against Leopards. They last lost to Ingwe in 2009 and this season, they won the first leg 1-0.
With three ex Stima players in the Leopards’ ranks, this match has the hall marks of a derby. Augustine Etemesi, Brian Masiolo and lately Francis Chinjili all crossed over from Stima to Leopards.
New assistant coach Mickey Weche will also make his debut for |Ingwe teaming up with Dutchman Jan Koops who is the head coach
Prediction: AFC Leopards 2-2 W. Stima
Gilbert Wandera of The Standard offers the following piece


Humbled AFC Leopards take on Western Stima this evening in a Kenyan Premier League (KPL) fixture at Nyayo Stadium.
It has been a trying period for Leopards, who lost 3-1 at the weekend to arch-rivals Gor Mahia.
The loss to Gor led to the dismissal of Nick Yakhama as assistant coach. Yakhama joined the club in April and left after winning only once. His troubles began four weeks ago as the club went on a losing streak of six matches.


here was a brief respite with a 2-1 win over Thika United two weeks ago, but this was after Yakhama had been relegated to the position of assistant coach.
Then came last Sunday’s 3-1 loss and his position became untenable.
With the league getting into its second leg, it is important for Leopards to end their poor performance and today’s match provides them that opportunity.
Leopards goalkeeper Barnabas Tiema has had some great matches recently and will be key in keeping the score sheet clean at the end of 90 minutes today.
Leopards will also need to avoid conceding an early goal, something they have not been able to do of late as they seem to suffer from a leaking defence.
Up front, Mike Barasa and Jimmy Bagaye (far right in picture above) will be relied on to score goals for Leopards this evening.
Speaking on the match, Western Stima coach Henry Omino has told his players to be wary of Leopards going into today’s fixture. The match will be shown live on SuperSport 9.
"It is going to be a challenging match. We cannot look down on Leopards since they lost to Gor Mahia on Sunday and will be keen to avenge that defeat," he said.
Omino, however, said his team has no injury worries ahead of the fixture and has welcomed back the return of two key players Kevin Oluoch and Vincent Oduor who have recovered.
"I think the match will be very exciting as both teams strive for the elusive three points at stake," he said.
Stima are seventh on the standings with 26 points and unlike Leopards have had a great time in the last four weeks.
Stima will be hoping to win against Leopards again after winning the first leg 1-0 in Kakamega during the first leg.
Dennis Machio of MichezoAfrika writes
AFC Leopards has made a few changes to its starting line up to face off a determined Western Stima side in a Western Province City derby slated for 7:00PM on Thursday at the Nyayo stadium.

Captain Nicholas Muyoti who was uninspirational last weekend against Gor Mahia will start on the bench alongside John Amboko and Francis Chinjili.

With Stima aware of the best way to curb Chinjili, AFC Leopards’ head coach Jans Koops has opted to start him on the bench. At the center pitch Charles Okwemba and Oscar Kadenge will command the spraying of balls to the forward liners including Mike Baraza and Jimmy Bageya.

This is a must win match for AFC Leopards that is precariously placed 12th on the league table with 19 points from 17 matches.

The team will be under a new technical management on Thursday after the dismissal of Nick Yakhama.Mickey Weche will for the first time in many years get back a spot on the team’s bench as the assistant coach just hours after he was unveiled by the team’s executive on Wednesday.