After two weeks of much silence from the Leopards, bar the Ole Polos visit by the Ingwe Fans, Leopards return to the ring... er... to the pitch this weekend when they taken on Western Stima in Bukhungu Stadium, Kakamega.

Kenyanstar, a great website for catching up with local sport, has a good preview of the match complete with a probable lineup. The story by Francis Ontomwa reads:-

Where Isukuti meets Isukuti! The Western Stima Vs AFC Leopards match on Sunday promises to steal the thunder in the town of Kakamega. Leave alone the fireworks expected from either side, this is going to be a battle for supremacy  over the Western region’s football fan base given that the two clubs command the largest following here than any other region in Kenya.
With both teams taking pride in numbers, this is likely going to go down as the biggest Kenya Premier League (KPL) battle at Bukhungu in the recent times. Stima may have sprout years after AFC Leopards was incepted in the Western region of Kenya; however it has managed in the recent times to woo supporters and emerge as a firm favourite for lovers of football here.
And who said, AFC is an underdog to fans from Western region? Ingwe still enjoys a network of fans that have religiously remained solid behind them even after shifting base to Nairobi over the years. Again, AFC’s fans are known to travel far and wide just for solidarity reasons!
That aside! Dare write off any side yet? You will be doing it at your own risk! Both sides seem to be in their best form than ever, you listen to the players, the tacticians and even analysts from either side you find yourself gazing to the skies in quandary! Whose drums will silence the others?
Mumias Sugar Company ‘s money spinning sponsorship seems to have fueled AFC’s ambitions and if their last encounter against Karuturi Sports at Mumias Complex is anything to go by, then Western Stima should brace for a challenge of real pedigree!
AFC Leopards will be coming into this match a much invigorated side with heads high after walloping Karuturi Sports by a solitary goal. Stima on the other hand will be seeking to continue their unbeaten home record despite going down in their last match to Gor Mahia FC in Nairobi.
The last time the two teams met at this venue, AFC Leopards left Stima reeling, and this, Stima’s boss Henry Omino is not ready to stomach this time round.
“We have a mission to accomplish this weekend, we want to beat AFC Leopards and bring our dreams back on track despite last encounter’s loss to Gor” says Omino. After taking full charge at the helm of AFC, rival Coach Robert Matano is a man to watch. “We have no room to accommodate loses, this is a must win match for us” asserts Matano.
While at home, Stima has been known to play an open set piece upfront. They attack from the flanks and most of their goals at Bukhungu have resulted from counter attacks. The trick here is-placing total capital on the speedy flank men, veteran Marks Sirengo on the left and Mike Khaduli on the right.
Omino will be crossing his fingers that dependable midfielder Ali ‘Bai’ Ahmed, Kevin Oluoch and Dennis Onyango recovers quickly from Malaria to join the rest in preparations for this tough game. The services of defensive midfilder Kevin Serenge’s fate hang on a balance after he sustained a minor injury against Gor Mahia.
Leopards Coach Matano is likely to employ the same set piece that carried the day at Mumias Complex save for the the absence of Bernard Wanyama. Leopards will however be boosted by the return of Defender Martin Imbalambala and striker Brian masiolo. The team though known to put up speedy touches in their matches builds their game patiently from the keeper who supplies the balls to defenders dolling them to midfielders and before you know it, the strikers have it and the rest is tragedy!
During the Mumias Complex show, Captain Nicholas Muyoti sank deep to the central defense position and his tact seemed to work pretty well with defenders John Amboko, Douglas Okumu and flank man slender Chelsea’s Ramires look alike Edgar Waudo.
While Amboko partnered with Muyoti at the central defense with occasional appearances of Okumu, Waudo was on the near flank to clear balls away from their custody and their plan seemed to work out jolly well. And if they stage the same synchrony from behind against Stima, then no doubt it will require much wisdom from Stima’s forwards to break the wall.

Carol Radull goes for a Leopards win 2-1 in what she dubs the 'Engokho Derby'. 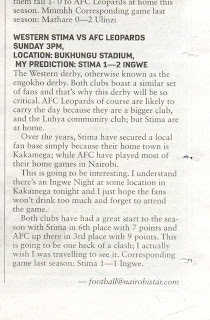 The Western derby, otherwise known as the engokho derby. Both clubs boast a similar set of fans and that’s why this derby will be so critical. AFC Leopards of course are likely to carry the day because they are a bigger club, and the Luhya community club; but Stima are at home. Over the years, Stima have secured a local fan base simply because their home town is Kakamega; while AFC have played most of their home games in Nairobi. This is going to be interesting. I understand there’s an Ingwe Night at some location in Kakamega tonight and I just hope the fans won’t drink too much and forget to attend the game. Both clubs have had a great start to the season with Stima in 6th place with 7 points and AFC up there in 3rd place with 9 points. This is going to be one heck of a clash; I actually wish I was travelling to see it. Corresponding game last season: Stima 1—1 Ingwe.
Supersport goes for a Western Stima win 2-1.
Western Stima vs AFC Leopards(Bukhungu)
Western Stima's veteran coach Henry Omino has masterminded a good run in the league with only the defeat to Gor Mahia in their last match as a blot on an otherwise great season, but playing at home against AFC Leopards will be a tough ask for the side.
Leopards have been impressive this season despite their well publicised management crisis before the start of the league.They are third on the log with nine points while Stima are in sixth position with seven points.
It will be nice to see the likes of Demonde Selenga, Itubu Imbem and Hugo Nzoka up against Francis Chinjili, Fred Nyarombo and Wesley Kemboi in battle of forwards.
Kakamega is Leopards’ spiritual home where it gets immense support and it will be interesting to see how Stima cope with the pressure of not being favourites at home.
Our Prediction:2-1
KPL website has the following report:-
(6)Western Stima v (3)AFC Leopards
Most who have seen much of Western Stima this year, even if they are AFC Leopards supporters, can vouch for the Kakamega team’s excellent spirit and abilities which will be difficult for Leopards to suppress at Bukhungu Stadium.
Stima showed so much confidence when they recently knocked out Tusker from the “KPL Top 8” first round in Nairobi, that everyone recognizes their quality that can take on anyone in the country.
But to make sure they do not slip any further than the sixth place they currently occupy, Western Stima realise the importance of bringing down Leopards who are perched on a coveted third.
Leopards were expected in Kakamega well before the match and on Saturday night, an “Ingwe Night” [Leopards Night] of welcoming the team, promoting it, selling merchandise and enlisting supporters, was planned at a hotel.
A brilliant fight is expected and entertainment by attack minded forwards a certainty.
Demonde Selenga, Itubu Imbem and Hugo Nzoka go into the Leopards goal hunt and the visitors may also want to launch former Western Stima home boy, Brian Masiolo, back on familiar turf.
Francis Chinjili, Fred Nyarombo and Wesley Kemboi will goal-hunt for Stima, of course with the assistance of ever dependable Mark Sirengo and Ali Bhai.
Prediction: 2-1
Posted by Ingwe Fan at 6:51 PM