Leopards lost 1-0 away to Congo Utd 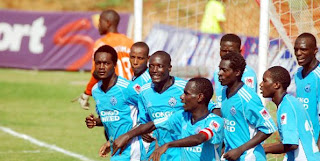 Congo United registered their first win in the Kenya Premier League when they edged out AFC Leopards 1-0 in an entertaining match at the KPA Mbaraki Sports Club.

It was a sweet victory for new Congo United coach Gilbert Selebwa who took over from  sacked Gideon Ochieng early in the week.

Selebwa, formerly coach at Leopards, said he had proved a point to his former club who unceremoniously threw him out after he struggled with the team through the Nationwide League.

Congo United captain Rama Salim scored the all-important goal via a penalty in the 78th minute after he was brought down by Leopards’ skipper Nicholas Muyoti.
Kenya Football Federation vice-chairman Twaha Mbarak gave Congo a Sh20,000 cash award for their rare win.

Michezoafrika had a story by Dennis Machio
AFC Leopards visit to the Oceanic City of Mombasa ended disastrously on Sunday afternoon as Congo United collected their first KPL win with a 50th minute goal courtesy captain Rama Salim.The win is a sure boost to Congo’s new coach Gilbert Selebwa (formerly AFC Leopards’ coach) who collected maximum points on his first assignment in charge after taking over the team on Monday this week following the dismissal of former coach Gideon Ochieng.

Before Sunday’s match, Congo United languished at the bottom of table on 2 points from two draws in seven matches but have now increased their tally to five points after eight matches. The win pushes Congo a slot above City stars who now take the tail end of the league on four points.

In the first half, it was a case of wasted chances by both sides with AFC Leopards up in arms blaming the match officials for denying them a genuine penalty in the 30th minute when Masiolo was brought down in the box.

Two minutes after the break, a goal bound Rama Salim was also brought down in the box on the other end by defender Douglas Okumu and referee Dan Ongindi pointed to the spot. Rama Salim stepped up to calmly slot home the lone goal for Congo United in the 50th minute to spark off wild jubilation in Mombasa.

The goal rejuvenated AFC Leopard’s attack with Matano throwing in Itubu Imbem but that did not translate to anything tangible as Itubu and Wandera wasted numerous scoring chances in the dying minutes of the match to end their coastal tour without a single point.

Speaking after the match, Congo United captain and goal scorer Rama Salim thanked the new changes brought by Selebwa in the team saying that contributed immensely to their famous first win.

“This is my best performance this season and I thank all the players for putting in their all to ensure we win the match. The new changes brought by our coach have done us great good.” Said Rama.

AFC Leopards coach Robert Matano who has been under immense pressure from the fans to resign blamed the referee for biased officiating claiming he was denied a genuine penalty in the first half of the match.

“We are all delighted by the win; it was not just a win but a big win against a big team. The boys played very well and next week’s match against Gor Mahia will be a sure entertainer because we shall stop at nothing but maximum points’ collection.” Said team Vice chairman Evans Kazungu.
Posted by Ingwe Fan at 4:55 PM