Not the result you were expecting but Leopards went down by a solitary goal to KCB. The video highlights of the match are available here

AFC Leopards caged
KCB completed a week of remarkable upsets by taming AFC Leopards at the City Stadium with a solitary Michael Oyando goal from a freekick.
Rangers had claimed Sofapaka’s prized scalp with a stunning 2-0 win at the same venue on Saturday before Nairobi City Stars struck Gor Mahia with Cupid’s Arrow in a match their coach Ken Odhiambo said it was like watching "a romance movie."
And yesterday, AFC Leopards huffed and puffed, trying to banish any ideas of an upset by the bankers — largely driven by their illustrious past. But hard as they tried, KCB held their own until a clip from behind by Emmanuel Tostao on Benjamin Chaka gave the bankers the platform to hurt the felines.
Oyando’s freekick executed with his favoured left foot took a wicked deflection to zip into the top left corner to trigger a deafening silence as the ball nestled at the bottom of the net.
Evans Wandera went close with a header off Martin Imbalambala’s long throw-in, and in what could pass for a lesson that "many rats cannot dig a hole", several AFC Leopards clattered into each other when Demonde Selenga burst into the box at the death.
Creditably though, KCB goalkeeper Caleb Adola had the presence of mind to keep his eyes on the ball, making a vital block as Leopards poured forward for a leveller. If KCB coach would be a happy man with the three points, it is his striker Hussein Puzzo who went home a relieved lad as moments before Adola’s save, he had wheeled away unattended from the centre-circle only to try a not-so-clever chip on goalkeeper Barnabas Tiema.
It did not matter after 90 minutes as Saleh claimed first leg bragging rights against Robert Matano who had spoken of AFC Leopards’ unbreakable spirit before the match.
MichezoAfrika.Com reports:- 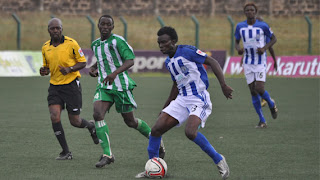 AFC will live to blame themselves for ruined open chances including a last gasp opportunity in the 92nd minute that saw Demonde Selenga blast direct to the body of a fully stretched Caleb Adola in the KCB goal.

Matano took a different approach in the match resting Itubu Imbem and starting Demonde Selenga in the offensive midfield. When he came in as a substitute in the second half, Itubu Imbem was played on the flanks other than his normal central forward position.

Laurent Tumba had a casual day throwing away a clean chance in the 20th minute when he received a perfect cross from Demonde Selenga but his slow reaction allowed the ball through way between his legs in an opportunity easier to score than to miss.

International midfielder Abraham Cokie almost opened the scores for AFC in the 25th minute but his well executed curl from a free kick at the edge went inches wide.

In the second half, a series of blind passes and lack of cohesiveness in the midfield cost AFC leopards a flowing game as KCB looked well organized at the centre.

Matano threw in Itubu Imbem and Evans Wandera in the second half but this did not make any meaningful difference as KCB remained solid in defense to cut out the attacks.

KCB ‘s goal was scored by Michael Oyando in the 68th minute from a free kick 25 meters off the goal.Oyando sent home a dipping screamer that dropped right under the nose of Barnabas Tiema.

A long throw from substitute martin Imbalambala almost caused damage to KCB but Evans Wandera’s header was slightly off target.

It could have been 2-0 in favor of KCB had Hussein Puzzo slotted home in the 88th minute.Puzzo alone with Tiema with the entire defense rooted in protest of offside failed to  beat Tiema and his weak chip over was easily dealt with.

A counter attack immediately after almost leveled the scores but poor execution and over dribbling by Demonde Selenga ruined the last minute chance for AFC.

Keeper Caleb Adola had himself booked for malicious time wasting when he repeatedly untied his shoe laces to quell the pressure mounted by AFC.The tactical approach eventually paid off as AFC remained frustrated with quick reactions that failed to build up.

“This was not our day at all. We did not utilize our chances and am starting to get a little bit worried about our finishing. It is very blunt of late.” Said AFC Leopards Coach Matano Robert.

The loss is the second consecutive disappointing outing for AFC Leopards after going down 0-1 at the Bukhungu stadium against Western Stima last week on Sunday. 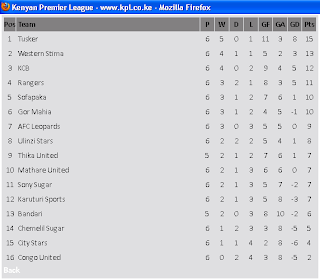 KPL website reports:-
Michael Oyando’s 68th minute free kick from 25 meters dipped amazingly over AFC Leopards’ ‘keeper Barnabas Tiema to give KCB their second win in a row that took them to the third spot on the table.
Leopards had numerous chances but a reshuffled line-up seemed not to have been beneficial. The changes may have been necessary after Leopards previous 1-0 loss to Western Stima in Kakamega but they just did not show profit.
Keeper Caleb Adola played a sterling role in the bankers’ defence and thwarted many Leopards’ raids in which Dimonde Selenga was the executioner.
“This was not our day at all. We could not convert any of our chances and I am starting to get a little bit worried about our finishing. It is very blunt of late,” said Leopards coach Robert Matano.
Nairobi Star has the report as follows:- 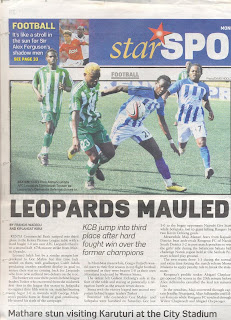 Nation also had the story in itas print edition though none was available online. 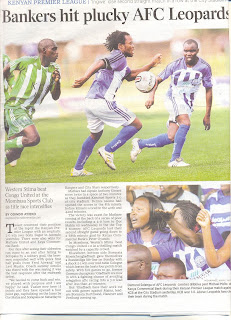 Clearly the newspapers have smethinbg for Demonde Selenga.
The Standings as per the KPL website
Posted by Ingwe Fan at 9:00 PM