AFC Leopards drew 1-1 with Sofapaka FC in a battle of newly promoted teams played at the Moi International Sports Centre, Kasarani. It was a match that had 'Daylight Robbery' written across it as referee James Otieno disallowed a legitimate Leopards goal that would perhaps secured Leopards first win of the season.

Sofapaka came from a goal down to share the spoils with AFC Leopards in this Kenya Premier League match at Kasarani.

Leopards went up early in the first half, thanks to a12th minute goal by Godfrey Shikanda.

The former champions should have been two goals up in the 30th minute, but were denied what looked a genuine goal when Sofapaka goalkeeper George Opiyo punched into his own net.

Instead of allowing the goal, assistant referee Nathaniel Ndwigwa raised the flag for an off-side.

After dominating the first half, Leopards were on the receiving end in the second as their opponents held them in their half.

It took less than 20 minutes before the newcomers equalised and Leopards goalkeeper Charles Onyango should blame himself for allowing such an easy goal.

Onyango failed to hold onto a harmless ball by Herman Wandera which fell on the legs of Bob Mugalia and he tapped home Sofapaka’s equaliser.

Leopards had one last chance to go up in the 75th minute, but Opiyo stretched to keep out Tafadzwa Dondo’s strike inside Sofapaka’s danger zone.

Veteran Zablon Amanaka was cautioned late in the second half for a bad tackle on Leopard’s striker Dondo.

AFC Leopards, the bottom team, led with a 12th minute goal by Godfrey Shikanda but Sofapaka's Bob Mugalia hit back in the 64th minute for the teams to share the points at Kasarani. New KPL side, Sofapaka, unbeaten so far, found the going tough against a Leopards side that showed promise of become competitive in the future.

Two sweeping attacks produced a goal for each team.

The two sides played determinedly, Leopards desperately trying to stem the tide of a poor start in the competition they have been absent from for two years and rookie side Sofapaka attempting to maintain their incredible performance that has seen them stay up there with the leaders.

In the 12th minute, Godfrey Shikanda possessed from a quick counter-attack by Leopards, evaded two defenders before firing from 30 yards out. George Opiyo in the Sofapaka goal had no chance.

The goal showed Leopards intent of grabbing their first win of the season, which would have raised lifted them at least three slots from their current bottom.

But like their skipper Francis Xavier was to say after the match, slip-ups in their defence cost them two valuable points.

This Leopards' flaw was exploited by Sofapaka in the 64th minute. Attacking with speed on the right flank Sofapaka's Evans Wandera fired at Charles Onyango from a narrow angle at the near post and the Leopards 'keeper could not hold letting the ball become a perfect cross for Bob Mugalia who tapped it into an empty goal.

Sofapaka had worked hard for the equaliser and by the time it came they had already made two very early substitutions; Wandera and Dennis Odhiambo came in simultaneously in the 49th minute. They added a lot of punch to their side resulting in the goal and a spirited hunt for the second.

In the 56th and 72nd minute, Leopards goalie Charles Onyango was forced to make two acrobatic saves from the legs of danger man Patrick Kagongo, scorer of their last week's great in their 2-1 win over Chemelil Sugar at the venue.

Leopards also had chances to knick the winner. After resting the tired Nigerian Umekwe Ekene and bringing in Tafadzwa Dondo the Zimbabwean brought live and inspiration up front. Dennis Mukaisi came close to a goal in the 75th minute when he was set through by Dondo but his shot was parried over the bar for a fruitless corner by Opiyo.

Xavier the Leopards skipper appealed to their supporters to remain patient as the teams works on hitting a winning run.

"Manchester United [English Premier League leaders] started on a poor note and where are they now?

Sofapaka coach Robert Matano said he was happy with the outcome but claimed: "We deserved to win. We created many chances but Leopards introduced delaying tactics when they were leading, this destabilised my team's attacking pace."

Sofapaka goalie beaten all the way... 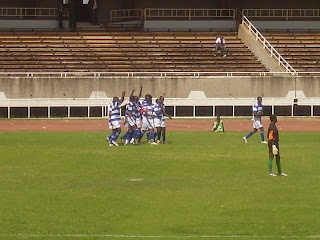 Sofapaka fans behaving badly by walking in the pitch whilst the match is going on and a corner is being taken. 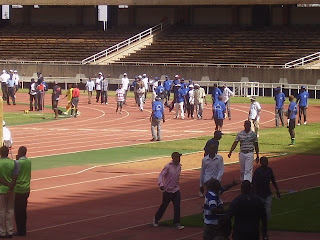 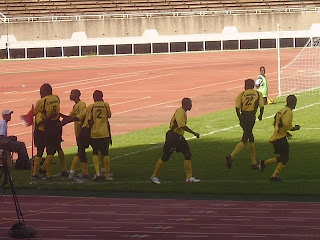 Leopards fans in a pensive 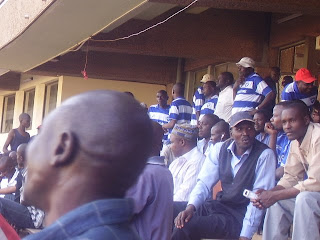 AFC Leopards have a free kick 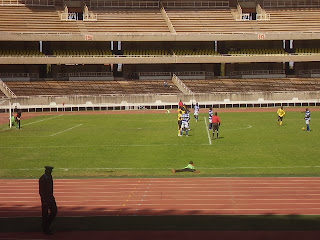 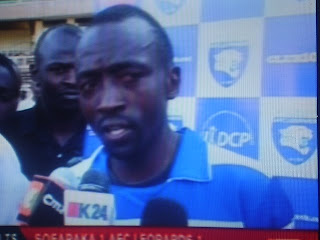