After a break in the league campaign that saw Leopards play in the FKL Cup against Homeboyz where the scoreline was 2-0 in favour of Ingwe, the league campaign resumes at the coast as Leopards take on Bandari.
It is all systems go and there is excitement at Leopards as they go hunting for the three points in Bandari.
The supporters trust CLAWS ran a competition involving its magazine Ingwe Fan and there were four lucky fans who were given air tickets to go and watch the match in Mombasa. 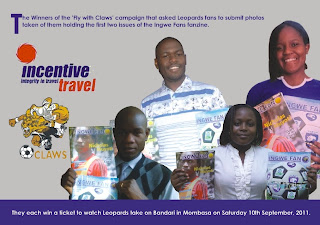 The Ingwe Travelling Fans Branch has also arranged for more fans to travel by bus to Mombasa. Fans paid their sums through Steve Mungo and Joram Mutiga tweo officials of the Travelling Fans Branch.
The team will fly out to ombasa on Saturday morning according to the official website of the club.
AFC Leopards will fly to Mombasa on the morning of Saturday 10th September 2011, collect three points from Bandari FC and fly back to Nairobi for dinner later in the evening. The program has been released by the club chairman Alex Magelo who exuded confidence that the 'on form' team will beat the coastal side on Saturday. A win will elevate Ingwe to position 8 from the current ten and increase preassure on the leading pack. International Mike Baraza, fresh from scoring a crucial goal for Harambee Stars aganist Guinea Bissau, is expected to hunt for goals together with youthful Emmanuel Tostao. Magelo called on all AFC fans to travel in big numbers to Mombasa to cheer the team to success. "We urge all the travelling fans and fans resideing in Mombasa to fill the Mbaraki stadium to cheer our boys to collect the three points," said Magelo.
Supersport predicts a 2-1 victory for Leopards. The report by Collins Okinyo who predicted the correct scores in the last outing in match number 21 states:-
Fourteenth placed Bandari have a herculean task when they host a resurgent AFC Leopards currently tenth with 29 points.
Leopards will be definitely banking on the prowess of their top marksman Mike Baraza who has nine goals to his name to provide the ammunition.
On the other hand Bandari are in trouble despite having one of the most lethal strikers this season in Abdulawahab Musa. Nothing but a win will suffice for the dockers who are fighting or their lives in the top flight.
Our Prediction: 1-2 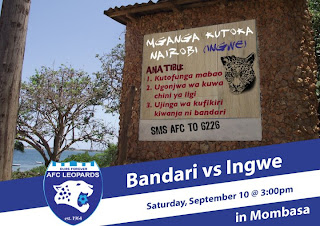 It is all systems go. 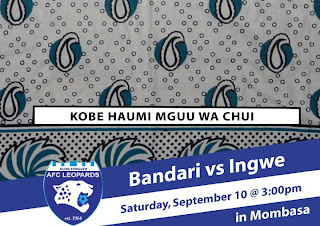 Bandari have indicated that they are ready for the Leopards. In a report filed by Fred Maingi on Supersport, the coach has exuded confidence.
Bandari coach Rishadi Shedu has vowed to get a win in this weekend’s Kenya Premier League (KPL) clash against AFC Leopards at the Mbaraki Sports Grounds.
Shedu said he was delighted with the recovery of his team’s most experienced player Ali Breik who has been nursing a knee injury though he is still sweating over the fitness of skipper Raphael Okello and goal-poacher Abdulwahab Musa.
“I’m waiting for our team doctor to confirm their status and whether I can draft them into my starting line-up against Leopards. They are crucial to the team and hopefully the doctor can give them a clean bill of health.”
“Leopards are currently in good form having won three consecutive matches against Sofapaka, Western Stima and Nairobi City Stars and we don’t want to be the fourth. We have prepared fully for the clash and if my players utilize their chances, we shall get a result.”
“I know we are the underdogs in this match but we will give them a run for their money, the way we did against Tusker at Nyayo Stadium last time out,” he added.
The Mombasa dockers are 14th on the log with 17 points from 21 outings. They have won five matches, drew two and have so far lost 14.

My Prediction: Bandari 1 – 2 Barasa
So AFC Leopards are going Luo! I mean that because they are flying down to Mombasa this morning for their match against Bandari. The club’s officials say it’s actually cheaper to fly there and back, than taking a bus that wastes a day; and paying for several night’s accommodation. It is true, plus it’s a motivating factor for those players who have never left the ground, but my story is that they’re doing it because Gor did it! (smiley face) When Gor did it though they lost to Congo so I hope AFC’s luck is different. Before the two week break Jan Koop’s side was on fire! A win over City Stars; a win over Sofapaka – you name it, they did it! With Mike Barasa scoring in almost every match, and Bandari wallowing just about the relegation zone, all I can say to Congo’s sisters is: “Pole Bandari!”