From All Africa courtesy the Nairobi Star 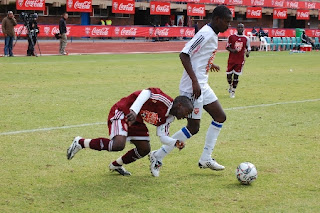 
Como revealed yesterday clubs in Europe have shown interest in the lad. "It is still in the early stages so I cannot mention the clubs interested but I can assure they include top clubs. Soon we may have something concrete on the table," he said.
Meanwhile it might only be five matches into the new Kenya Premier League season but Leopards are already casting their eye on the June player transfer window as they look to create a team capable of challenging for the league title year in year out. "Our management led by chairman Alex Ole Magelo and JJ.Bukachi have a clear vision. They know where they want this club to be and that is what we will be trying to achieve in the playing unit in June," Como said.


The 13-time league champions have yet to win the championship they last lifted in 1998 but the technical director is confident the waiting will end soon for the six million fans of the club. "We have a good team but we can improve it. Players like goalkeeper Barnabas Tiema are yet to reach their full potential. When they do we will be tough to beat," he said.
Como attributed Leopards current fine form after winning three straight league matches before falling to Western Stima last Sunday to unity.


"This is between the management, the players and the technical bench. We have been pulling in the same direction since we took charge. We have one of the best coaches in Robert Matano and team manager Bernard Onyango. They all respond to players needs. They take into account all points raised with the support of the chairman and sponsors Mumias Sugar," Como explained.


Leopards will be looking to rebound from Sunday's loss when they play KCB this weekend. The technical director was confident they will return to winning ways. "We will bounce back form the loss and continue to challenge for the top," he quipped.
Posted by Ingwe Fan at 6:43 PM