AFC Leopards, bruised in two previous defeats to Western Stima and KCB, fought like terriers; and hardened men were at the forefront.


The hardy striker, Hugo Nzangu, got both goals for Leopards but after his first in the 16th minute was cancelled out by an own goal by teammate defender John Amboko, Nzangu had to find a second which came right at the death.


Odary’s free-kick found Bagaye in the box but the Ugandan was bundled off the ball by Leopards’ defender Abraham Cokie. In the melee, Amboko’s attempt to clear bamboozled the flat-footed Barnabas Tiema in goal.


The teams looked headed for a draw four minutes into injury time when Nzangu rose above the City Stars defence to head in the winner.
Supersport had this story:-
Hugo Nzangu scored a last gasp goal to give AFC Leopards all three points in a 2-1 win over Nairobi City Stars at Nyayo National Stadium on Sunday.


The match looked to be headed for a draw after an own goal by John Amboko had cancelled out Nzangu’s first half strike but the former Sofapaka marksman turned in the rebound in the dying embers of the game to ensure all three points for Ingwe.


The victory halted a poor run of form that had seen the 13 time league champions lose two league matches in a row. Going into the match, Leopards needed a win and they got off to the perfect start going ahead on 11 minutes through Nzangu who took advantage after City Stars failed to clear their lines.


Leopards should have made it 2-0 on the stroke of halftime but City's keeper pulled off a vital stop to keep out a Nzangu header off an Abraham Cokie freekick with Itubu Imbem unable to score from the rebound.


The Kawangware side had much better start to the second half and they equalized when former City Stars defender Amboko headed the ball into his own net off a David Kingatua freekick.


Both side missed out on half chances as they went for all three points but with time running out Nzangu stepped up to score a vital goal for Leopards.
MichezoAfrika stated:- 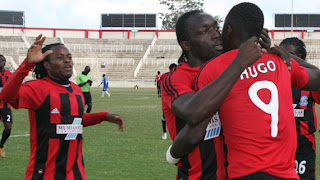 Hugo Nzoka`s brace helped a hapless AFC Leopards prey on City stars ending their two match losing streak at Nyayo stadium. The former Sofapaka reserve netted in the sixteenth minute with a powerful volley after Itubu Imbem brought in a cross from the right flank. Hugo`s opener put Ingwe ahead against the run of play as City stars dominated the match from kick-off.

Jimmy Bageya and George Odary constantly threatened Leopards’ defense marshaled by captain Nicholas Muyoti and John Amboko formerly of City stars. Stars put pressure on Robert Matano`s boys after falling behind and their endeavors nearly bore fruit in the 29 minute when John Mark Makwata`s surging run caught the backline napping. The midfielder unleashed a clever chip which the ever busy Barnabas Tiema in Leopards goal stretched full length to parry out for a corner.

Five minutes from the breather Leopards were once more under siege from stars offensive. Bageya picked a long ball flouted forward by Peter Ashango, dribbled past Douglas Okumu and Muyoti before laying a neat cross for David Kingatua. The youngster could have leveled terms for Ken Odhiambo`s boy but chose to let the ball roll over to Odary whos belated shot veered inches wide.

On the other end of the field, Peter Odhiambo denied Muyoti in the last minute of first half with an award winning save. AFC Leopards skipper sent a powerful header from a Selenga Mangili corner only to see his effort parried by Odhiambo.

City stars leveled nine minutes after restart courtesy of John Amboko`s own goal. Odary sent forward a low free-kick after Bageya was hauled to the ground by Abraham Cokie only for the defender to lift the ball over a bent Tiema for stars Equalizer. Stars pressed for the winning goal pinning leopards to their half until the introduction of Martin Imbalambala 25 minutes from time. Imbalambala managed to stable the midfield and cushion AFC back line with impressive tackles and fine passes.

The teams looked headed for a draw until the 94th minute when Nzoka rose above a crowded defense to head in Leopards winner and giving Matano a sigh of relief.

After the match Coach Matano  had breezed calls for resignation from fans, disappointed by the club’s poor showing. In response after the match he said:” In football there is losing and wining. League is a marathon with corners to be made. Losing two games does not take us out of title contention, we are not even halfway.”

The Nairobi City Stars website reported the game as follows:-

A week after recording their first win of the season, the Nairobi City Stars found themselves in unfamiliar ground. Going down to AFC Leopard at Nyayo Stadium on a Sunday fixture.

The City Stars started the game with the same line-up that played Gor Mahia, except for Nicholas Meja who was introduced in the back line. A strong build up in the first paces of the encounter between Jimmy Bageya and David Kengatua dismantled the Leopards defensive line. Itubu Imbem tried to impose his runs, but it was his teammate Hugo Nzoka who stole the headline.

With only fifteen minutes into the first half Nzoka gave the visitors the lead after he converted a Mutitiyia Selenga cross. Not boyed by the lead, City Stars continued to push forward displaying wonderful football, dictating the pace and possession, which did not go well with a section of Leopard supporters calling for direct resignation of head coach Robert Matano.

Kelvin Nyongesa's clever chip almost caught Tiema Barnabas flat foot, but good keeping saw him maintain his clean sheet at the half hour mark. With the lead to their advantage, Leopards tried changing strategy with Imbem and Selenga swapping flanks in a bid to add more crack on City Stars' defense.

George Odary could have equalized for his team with five minutes to go before the end of the half by his dummy run, which saw a Bageya cross running without conversion following a strong build up from the midfield. Imbem almost extended their lead, but his shot took a wrong direction and ending the first half.

The second half saw a more composed City Stars and with only seven minutes in the half, Odary sent a powerful freekick that deflected off former City Stars skipper, John Amboko, to equalizer. Until 94th minute, when imposing Nzoka scored the second goal, following a goal mouth melle the gave his team the win.

Martin Imbalambala's introduction in the sixtieth minute brought some stability to AFC's midfield, which was out played by City Stars midfielders.

Kenga's bicycle kick on 78th missed the target by only a few inches. Bageya was stretched out, following an injury, as Simon Ogutu stepped in as well as Geoffrey Shikanda. Imbalambala's chip hit cross bar in the dying minutes of the game, ending a match which it's means did not justify the end.