By Gilbert Wandera and Erick Ochieng’

Pressed further, the official was not willing to elaborate how the former coach has been undermining the office.

"For now that is all we can say on Selebwa’s fate," he said.

He announced that assistant coach Edward Manoah takes over on an acting capacity until a new coach is identified in the next couple of days.

"We have agreed Manoah takes charge of the team for a few days until we finalise the recruitment of a new coach," he said.

He did not confirm or deny whether former national team coach Twahir Muhiddin was tipped to take over. Contacted, Selebwa admitted to have been suspended but faulted the office of giving in to fans demands.

"I urge fans to give the office time to operate," he said. Selebwa denied charges levelled against him and challenged the officials to state his exact crimes.

He said he would continue to be part of the club and will still offer services when required.

"I still have a vision for this club. It has a future and the last thing I want is confrontation with anyone," he added.

At the same time, Leopards launched a Short Message Service facility aimed at wooing fans to join the club.

Interested fans will send a text to the number 2225 which will be charged a premium rate of Sh50.

Ekhalie said they are targeting two million members to hook up on the service that will help the club raise a substantial amount of money to run their activities in the next three months.

"The service is available on both Safaricom and Zain subscribers and is a way for our members to support the club," he said.

The report got the phone number wrong. It is 2325.

A separate story carries the positive news about Selebwa.

Meanwhile former AFC Leopards coach Gilbert Selebwa has backed his former club to beat Gor Mahia on Saturday in the Kenyan Premier League. Selebwa said he held no hard feelings after he was suspended.

"I spent a lot of my time and other resources to help Leopards get to where they are now. I feel the team needs everybody’s support the team. I will be rooting for Leopards to beat Gor because like anybody else we want this team to succeed," he said.

The resignation of Selebwa is also featured in the Nation.

And the Nairobi Star. 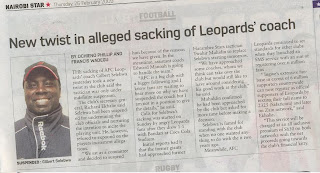 And the Daily Metro

Two divergent views are expressed by fans on the Discussion Forum on the Official Website.


It is a good idea and a bad idea too.

First, Selebwa has been patient with the team, since it was demoted. He has been using his resources while we were on in the Nation wide till he brought us this far. For that, i believe we should not relieve him off this duty.

On the other side, i believe we need an experience coach to assist him. Take Chris Makokha-the oldman, let him come to the technical bench to give ideas to Selebwa. I believe you are just blaming Selebwa alone but the whole technical bench have to answer the poor performance we have seen. With Chris, am sure things will improve.

Those who were in KK, remember replacing a player after 3 mins for just making a minor blunder-then why was he included in the staring 11?. I blame the whole bench for lack of communication.
Last weekend i talked to one of the officials and after writing in this forum, and the changes you made i the defence paid off despite the draw.

Thus, for me, i will opt for retaining Selebwa as an assistant to a new coach-probably Makokha for his experience, as dismissing Selebwa will also have a negative impact to some of the players.

For those in the know, Selebwa's woes did not begin or are not emanating from the pitch of play. This man is arrogant. The mere fact that ''he helped'' us come come back to the top flight is no reason to hold the club to ransom. Had you heard him speak before the press came to interview him after the Bandari match, you’d feel sorry. He has no respect for the fans.

He even has the audacity to say that the fans are good for nothing but heckle. Surely, those are not the kind of words we should hear from a coach. He went ahead and ridiculed the players. Like he poured vitriol on the goalkeeper in the press. That that was a silly mistake. There are better words to use to describe someone or something. He is a coach alright but his conduct was a bit wanting. We should have facts when arguing.

He was having a certain vendetta against some players. Take for example our good defender Kolo, he was on the bench just because of some misunderstanding with the coach. What of our best striker, Sebastian Muchera. Ask anyone the reason why he was brought in well after the second half?

Please these are pertinent questions that need your indulgence before you claim what you want to. Anyway finally the ''shoka'' has come to Selebwa but in as much as i do not subscribe to sacking of coaches, this particular one was coming.............. he should have woken up and smelt the coffee the moment we lost at KK to Stima.

Meanwhile, Sebastian Muchera is the lone AFC Leopards international after the call ups announced by Patrick Naggi.
Posted by Ingwe Fan at 1:31 PM