The Audacity of World Hope

We rolled into the World Hope Centre at exactly 4pm with some of us donning the new AFC Leopards replica shirts. Charges were priced at 50 shillings, 100 shillings and 250 shillings for the VIP. 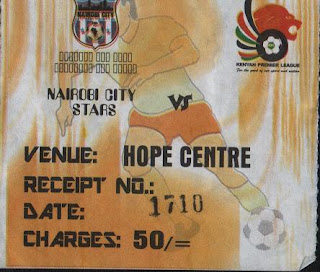 With the recession in mind, we paid our 50 Shillings and were let into the stadium through the red gate and were glad and sad at the same time. Glad that AFC fans had filled the stadium (or ground or Centre or field with a chicken perimeter fence) and sad that there was barely n space for anyone to watch the game.

Almost five layers of people were crammed near the fence meaning the shortest of us had to mimic the Biblical Zacchaues to even dream of catching a glimpse of our boys. 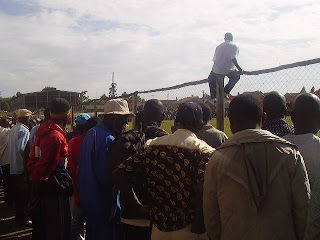 The enterprising amongst us looked for some brick stones to stand on to view the match. The unenterprising, well, they only watched people heads!!! 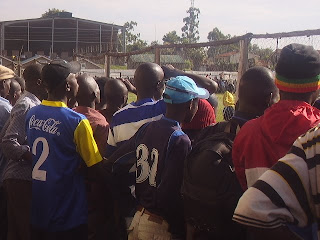 At some point, some fans disgusted that they could not watch the game due to the human mass in front of them resorted to shoving those who had blocked their view. Clearly, this ground was bursting to the seems. 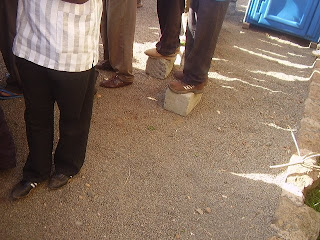 The first half ended goalless and yet there seemed to be more people getting into the ground through the outer fence which was a mash of foliage.

In the second half, eight minutes had barely gone when Nairobi City Stars scored against the run of play. The scorer, Bagiye was immediately booked by the referees he took off his boot and pretended to make a phone call.

Leopards made substitutions bringing on Shikanda and Njihia and they immediately turned on the sparkle.

But as the game swung in Leopards favour, the perimeter fence behind the Leopards goalkeeper gave way. The referee stopped play and in the ensuing confusion with other fans trying to find out what was happening, the fence came down and fans poured to the pitch.

The match was called off. As fans streamed out of the pitch, the red gate remained locked with a PADLOCK and it seemed no one was available to open the gate. Memories of the Nakumatt incident a few days before came to fore as it appeared the stadium management was not keen to open the gate for fear of fans entering the ground (to watch an abandoned match?) Surely!

Stadium security ought to be taken a bit more seriously to avoid incidences that may lead to lots of damage. Hard questions ought to posed. How many fans were admitted to the Ground? What is the capacity of this Ground? How many police officers were detailed to man the Ground?

If the League intends to bring out crowds to the stadia, then they better be prepared to ensure that the safety of fans is assured. Those of us who have young fans who are pre-teenhood will not wish to expose them to such dangers.

If this is not done, we will be bordering on the Hopeless situation, at a Ground that is supposed to inspire Hope.