Leopards finished the 2012 Kenyan Premier League campaign with a whimper as they lost 0-1 to Chemelil at Awendo.

The loss coupled with Gor Mahia's 1-1 draw at home with Thika United handed the title back to Tusker FC who won 3-0 to successfully defend their crown.

AFC summed up their shaky run lately this season with a 0-1 loss to Millers Chemelil Sugar at the Awendo Green Stadium on Saturday 10 November 2012.

Chemelil Sugar was evidently the better side starting the match on a high with Isemeki and Mwaniki on the offense after AFC appeared to have started on a relaxed mode.

Their efforts were rewarded in the 18th minute after Jonathan Mwaniki was fed with a through ball from the center of the park which he did not delay in heading in for the opener.

This goals sent shock waves through the Ingwe squad as they struggled to hold onto the electric paced game that Chemelil had now staged.

AFC suffered a blow early in the match as they were forced to replace injured Kiwaalabye with Idrissa Rajab as another Baraza corner was headed away by Chemelil’s David Ojwang’.

Paul Were could have pulled Ingwe level in the dying minute of the first half from Mike Baraza cross but the resultant kick missed the far post by a whisker.

Chemelil was the better side in the second half after managing to lock out the AFC attackers despite the introduction of Allan Wanga at the restart.

The Millers ensured that Leopards did not get the balls while maintaining the high tempo of the game. Their efforts were almost rewarded in the 73rd minute when Andrew Isemeki looped the ball over the keeper only for it to roll outside.

Laurent Tumba was introduced for Victor Ochieng’ but it was a matter of too late as Chemelil Sugar carried the day by a solitary goal. 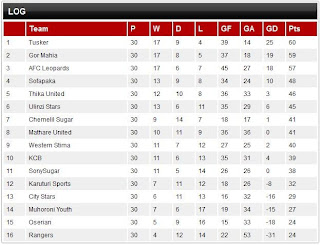