In an intriguing day of drama, the casualty was Kenya Premier League match number 107 between AFC Leopards and Sony Sugar.

First off, Football Kenya Federation sent out a letter cancelling the match:-


The Saturday 12 May 2012 Kenyan Premier League tie between hosts AFC Leopards and visiting Sony Sugar has been called off.

"Following a court injunction deterring the current office bearers of AFC Leopards from organizing and/or acting as bonafide officials of the club, it seemingly looks like that there is confusing in hosting of the above (Leopards – Sony Sugar) match. Since AFC Leopards are the hosting team, it has come to our attention that no proper security arrangements has been put in place hence in view of the confusion, the Federation is left with no choice but to cancel this match until further notice.


Resulting from the court order, and the legal contention between the two AFC SC factions, this encroaches the high security match which is bound to culminate in endangering the people’s safety and lives of the bonafide custodians in the country. We are compelled by the prevailing conditions to cancel the match until further notice."


Timothy Olobulu of MichezoAfrika had also carried a similar story:-

Football Kenya Federation has called off the Kenyan Premier League match pitting AFC Leopards and Sony Sugar that had been slated for this Saturday 12 May at Nyayo Stadium citing security reasons.

According to information sent from the FKF secretariat to KPL CEO Jack Oguda, the Federation has been convinced that ;

“No enough security has been guaranteed for the match as there is confusion on the actual office bearers due to the court injunctions”. “In view of the confusion, the federation is left with no choice but to cancel this match until further notice”.

The statement which is signed by FKF Chair Sam Nyamweya says that ;

“Resulting from the said court order and legal contention between the two factions, this encroaches a high security match which is bound to culminate in endangering people’s safety and lives of the bonafide custodians in the country, we are compelled by the prevailing circumstances to cancel this match until further notice”

The AFC Leopards management has been embroiled in tussles over the leadership of the club with Ssemi Aina and incumbent Alex Ole Magelo engaged in numerous court battles each claiming they are the legitimate chairman of the club.

Confusion was evident as the Sony coach insisted the match was on.

Sony Sugar coach Zedekiah ‘Zico’ Otieno says his team has not received any official communication regarding the cancellation of their game against AFC scheduled for Saturday at Nyayo  Stadium.FKF issued  a statement on Friday calling off the match citing  to security reasons.

According to Zico, the match is still on since they cannot rely on media reports.

"We are only reading about the cancellation on the media. We can’t take chances and move back home.Our players are ready for the match and our team manager is attending a pre-match conference" Said Zico.

KPL is expected to issue a statement on the development.

Kenya Premier League then followed with a cancellation of the match. 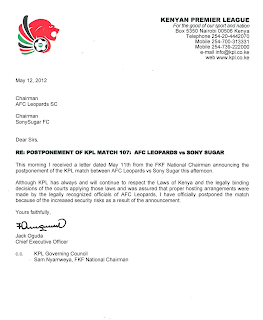 Kenya Premier League Limited has officially notified Sony Sugar and AFC Leopards that the match no 107 between the two sides scheduled for Saturday May 12 at Nyayo  Stadium has been postponed off in line with an earlier statement by FKF on the same.

KPL Chairman Jack Oguda wrote: "Although KPL has always and will continue to respect the Laws of Kenya and the legally binding decisions of the courts applying those laws and was assured that proper hosting arrangements were made by the legally recognized officials of AFC Leopards, I have officially postponed the match because of the increased security risks as a result of the announcement."

Leadership wrangles at AFC Leopards informed FKF's decision to call off the match due to security reasons.

A letter from the desk of Football Kenya Federation (FKF) Chair Sam  Nyamweya on Friday 11 May 2012 called off a Kenyan Premier League between AFC Leopards and Sony Sugar set for Saturday 12 May 20 that was to kick off at 1500 hrs at the Nyayo National Stadium.


The letter, addressed to KPL CEO Jack Oguda and the Chairmen of both Leopards and Sony Sugar, sited lack of proper security arrangements as the main reason for the call off.

Sent after working hours, the letter was received by KPL CEO on Saturday morning. And in solidarity, Oguda confirms that indeed the game is off.

"This morning I received a letter dated May 11th from the FKF National Chairman (Sam Nyamweya) announcing the postponement of the KPL match between AFC Leopards vs Sony Sugar this (Saturday 12 May 2012) afternoon.

Although KPL has always and will continue to respect the Laws of Kenya and the legally binding decisions of the courts applying those laws and was assured that proper hosting arrangements were made by the legally recognized officials of AFC Leopards, I have officially postponed the match because of the increased security risks as a result of the announcement.

The new date for the tie is yet to be provided.

The Nation had in an earlier report also mentioned the fact that the wrangling for the leadership of Leopards was getting out of hand. Odindo Ayieko wrote:-

Deeply-rooted politics at Kenyan Premier League side AFC Leopards have returned to haunt the club and are threatening to rob Ingwe of what was possibly going to be their best season in a decade.

From the pitch where the club had gone 23 matches unbeaten, Ingwe have now collected a point out of a possible nine and last weekend’s 3-0 humiliation in the hands of Nairobi City Stars painted a picture of a long bumpy ride in the title race.


A court ruling has stopped the club’s executive from running the side and accounts frozen, painting a gloomy picture for the league leaders both on and off the pitch.


Off the pitch, it’s not known who between Alex Ole Magelo and Ssemi Aina is the chairman of the club.


On the pitch, the seven-point lead Leopards held a fortnight ago has been cut to one and Leopards may be displaced from the league summit by the end of Saturday.


Leopards play Sony Sugar at Nyayo Stadium, hoping to revive their title credentials and Sony coach Zedekiah ‘Zico’ Otieno has said they are travelling to Nairobi to add more misery to the den.

“My team is fully fit. We are ready for AFC Leopards. I know they are a good side but we will cash in on their current crisis in confidence on the pitch,” said Otieno.


Leopards are without striker Allan Wanga while forward Mike Baraza and defender Eric Masika are doubtful, something that worries coach Jan Koops.
“Wanga has not been at his best. He has been struggling and will need some rest. We are waiting for a late fitness test before making a decision on Baraza and Masika,” said Koops.
Ingwe have also been unsettled with reports that Tanzania club Azam are targeting star performer Salim Kinje but Koops says their poor run is over and Leopards will return to their winning ways on Saturday.
Meanwhile, Sofapaka will take over KPL’s leadership if they beat Muhoroni away and Leopards lose to Sony.
Only a point separates Leopards and Sofapaka. Leopards play Sofapaka on Wednesday, a game that will determine who goes to the break at the top of the table.