Leopards drew 0-0 with KCB in the final match of the season.

AFC Leopards were held to a barren draw by stubborn Kenya Commercial Bank (KCB) in another entertaining KPL tie staged at the Nairobi City Stadium.

Following the draw, Leopards finish the season in fifth place on 46 points while KCB end teh season in ninth on 40.
It was Mike Barasa’ last match before leaving for Malaysia but he was unable to consolidate his scoring prowess. He finished second with 11 goals behind Ulinzi Stars Stephen Waruru who ended with 12.
AFC Leopards started the match strongly with their strikers led by Barasa, Oscar Kadenge, Francis Chinjili and Charles Okwemba giving KCB defenders hectic moments with goalkeeper Caleb Adola making several acrobatic saves. 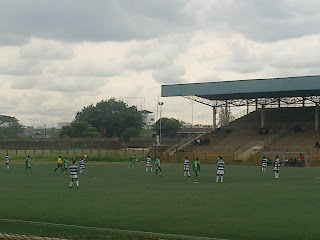 Timothy Olubulu of Kenyanstar reports that Mike Baraza got a farewell gift:-
AFC Leopards striker Mike Barasa was awarded with a hen as a gift from AFC Leopards fans, playing his last match for the team before he departs to Malaysia where he has signed a contract with a top Malaysian club.
The fans awarded Barry as they have come to christen him with the award for helping them rise to fifth position in the league standings and for the six goals he has scored for them
Speaking to Kenyanstar after the match, Barasa expressed his gratitude to the fans adding that he will miss them when he goes to Malaysia.
"I felt really happy and it was an honor for me. I will always treasure AFC fans wherever I go", he told Kenyanstar.
Barasa will travel to Nakuru later in the evening to spend the night with his family before flying out to Malaysia on Sunday evening.
At the same time, AFC Leopards players gave away thheir jerseys to fans after their barren draw with KCB and signed signatures for the supporters. Mike Barasa was whisked away by security after the number of fans overwhelmed him.
AFC Leopards have finished 5th in the league standings bettering their performance last year and coach Jan Koops and the crop of players signed in June have contributed to the success.
Posted by Ingwe Fan at 8:43 AM