Leopards lost 3-1 against a resurgent Sofapaka.


Bob Mugalia struck himself a second brace in a week to guide his team to a 3-1 win over AFC Leopards in an entertaining KPL fixture played at the Nyayo stadium on Wednesday night. John Lefty Njoroge added the third for Sofapaka while new signing Naimana Jonas scored Ingwe’s consolation goal from a free kick on his debut.

The loss is the third straight defeat for AFC Leopards with coach Nick Yakhama facing a tumultuous moment at the Ingwe’s bench having managed a single win since taking over a couple of months back.

AFC Leopards threw in their best starting with a twin attack of Chinjili and Baraza while diminutive Ugandan striker Jimmy Bageya sneaked in through the wings.AFC started on a positive with Chinjili powering through the defenders but his attempt was deflected for a corner in the 2nd minute.

Mieno Humphrey almost responded immediately on the other end with a sharp bouncing header that was parried off the line by Tiema.

Bob Mugalia who seems to have regained his top form came calling in the 17th minute rounding off the AFC Leopards defenders to sleek home Sofapaka’s first goal.

Sofapaka silenced the AFC Leopards’ Isukuti with their flamboyant passing in the midfield and could have scored a classic goal in the 25th minute from 15 uninterrupted passes but Mugalia from the edge of the box blasted the final touch over the cross bar.

John Njoroge notched in the 2nd of Sofapaka’s goal from a lovely Humphrey Mieno lob that deflected off an AFC Leopards defender. Lefty chipped the ball beyond an advancing Tiema in goal to cushion his team to a comfortable 2-0 lead by the breather.

After the second goal coach Yakhama pulled off Martin Imbalambala in the 37th minute for new signing Collins Kisuya in an attempt to seal off a leaking space at the backline.

From the break, AFC Leopards piled the pressure in search of the equalizer and it was the new signings who produced the moment that brought back hope when Chinjili was brought down at the edge of the box by Musa Mudde.Jonas Naimana in his debut for AFC Leopards curled the resultant free kick beyond the wall to reduce the margin to 2-1.

The goal resuscitated the sinking Leopard as they maintained their attacking tempo with Mike Baraza and Muyoti coming close to leveling but the attacks were met with a quick damaging counter attack.

A deep ball from the center found a cunning Petit Kagogo who reduced two defenders with his step overs, lobbed the ball for John Baraza, Baraza dummied a carelessly advancing Waudo in the box before laying a hard square pass over to an unmarked Mugalia on the right.Mugalia wasted no chance sending a diagonal rocket shot to the far post beyond a hapless Tiema to advance the score line to 3-1 in the 79th minute.

“It was a lovely outing for us and we are delighted with the win. We have found our winning form and we hope to maintain the same.” Said Humphrey Mieno after the match.

The win moves Sofapaka up to 5th spot with 23 points same as Gor Mahia and Western Stima but Batoto Ba Mungu hold a better goal aggregate.AFC is 12th on the chat with 16 points from 14 matches. AFC Leopards next face Gor Mahia to finish their first leg fixtures.
James Wokabi writing for Supersport reports:
Bob Mugalia scored a brace as Sofapaka’s resurgence continued with a 3-1 hiding of AFC Leopards at Nyayo National Stadium on Wednesday evening.
John Njoroge got the other goal as the 2009 champions outclassed, out-thought and out-fought Leopards in a performance full of verve and vigour to register their third win in four matches.
The result lifted them upto fifth in the league standings with 23 points ahead of Gor Mahia on goal difference.
It was Leopards’ third straight defeat adding pressure on Coach Nick Yakhama who has now only won one match since he took over.
Leopards had spent a fortune in the transfer window and the coach threw on the new boys with Mike Baraza, Jimmy Bageya and Francis Chinjili forming a three pronged attack.
Matches between these sides are always explosive and Leopards keeper Boniface Tiema had to be at his best to keep out a Humphrey Mieno header on five minutes.
They went ahead on 17 minutes when Mugalia chased down a long ball, sneaked in past defender John Amboko to flick past the keeper before slotting it into an empty net.
The goal lifted the victors and they could have increased the lead on 25 minutes when a three minute spell of possession ended with a great chance for Mugalia only for the striker to fire over.
A minute later, Patrick Kagogo dragged his shot wide and on the half hour mark, Titus Mulama forced Tiema to a low save.
They went two up four minutes before halftime when Mieno put Njoroge through on goal, the ball took a fortunate touch off a defender and Njoroge made no mistake with a fine finish off the post.
Leopards started the second half eager to reduce the deficit and they halved it on 56 minutes.
Chinjili was brought down on the edge of the box and fellow new signing Jonas Nahimana curled in a quite delightful freekick to make it 2-1.
But any hopes of a comeback were dashed 11 minutes from time after a lightning counter attack. Kagogo found John Baraza down the left and his nifty footwork left Edgar Waudo on his backside before crossing for Mugalia who crashed a first time volley into the net.
Kenyanstar in a report by Timothy Olobulu reports: 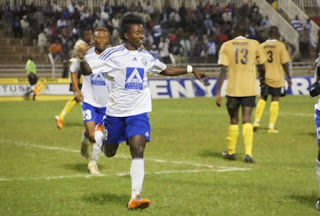 Bob Mugalia struck his second brace within the span of a week as Sofapaka humbled AFC leopards 3-1 in a thrilling KPL encounter played last night at the Nyayo National Stadium
Coming into the game with four new players who had been signed with a huge lumpsome in the transfer window, AFC started swift off the blocks with Mike Barasa and Francis Chinjili leading the early on-slot.
The Sofapaka defense marshaled by Mudde Musa and Edgar Ochieng though kept their discipline to ensure that AFC did not get the opener that would otherwise charge them more.

With Jimmy Bageya running on the left, Barasa on the right and Chinjili printed as the main man in front of goal, Ingwe continued with their unfruitful surge for goals. Sofapaka looked calm all through as they chose to play cautiously, possibly waiting for the chance to prowl on the Leopard.

This they did in the 21st minute when Bob Mugalia took advantage of a defensive mix up between Martin Imbalambala, Edgar Waudo and keeper Barnabas Tiema to lob in the opener.

In almost similar fashion, John Njoroge added to Ingwe’s woes in the 39th minute with the defense caught napping and in a mix up. Sofapaka now took total control of the match with the hundreds of AFC fans who had thronged the stadium watched affairs with their heads down, while the Sofapaka drumbeats grew louder and louder.

Sensing that the defense was not doing its job appropriately, Nick Yakhama was forced to pull out Martin Imbalambala and brought in Collins Kisuya as the first half grew old. Papi Naimana was drawn back into central defense while Kisuya took the left back.

Come the second half, Ingwe came with renewed vigour pressing the attack from the time Nassur Doka’s whistle blew. 17 minutes from the restart, new kid Jonas “Papi” Naimana gave Ingwe something to smile with a clinically executed freekick, breathing a sigh of hope into the whole Stadium.

Bob Mugalia then broke the hearts of Ingwe fans more as he completed his brace in the 85th minute. Idrissa Rajab started the move from theor own half, giving the ball to Patrick Kagogo who with the first touch released John Baraza. The captain who had enjoyed a good game took on Edgar Waudo, floored him with a dummy before releasing a pass to Mugalia from the outside of his foot. The mo-hawked striker put the ball down, looked up and unleashed a shot that beat Tiema into his far right corner.
The win now sees Batoto Ba Mungu, who have scored seven goals in two matches, move to 5th position on 23 points while AFC remains rooted in 12th with 169 points, only three shy of the relegation zone.
KPL Standings