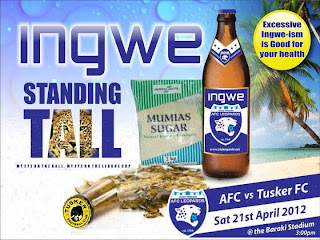 Pundits reckon this is sure going to be a humdinger. The defending champions take on the league leaders at a venue that is seemingly neutral to both sides. The league leaders are gathering premier league points like a magnet on filings and they have taken a mind blowing 26 out of a possible 30. The Leopards have won all the matches played away from having taken maximum points in Nakuru, Thika and twice in Mumias.

The TV cameras have also been following them and of the ten matches played so far, seven have been live with this weekend seeing the possibility of Bernard Otieno screaming, “BARRRAAAAAZAAAA!!!” as the eighth out of eleven matches are shown. The Chairman of the Sofa Set Branch must be wishing he could send a bottle of wine or a quiche or something to Gary Rathbone.

Tusker FC of course, is a difficult customer and of all the teams in the league, none has a better record against Leopards than the Brewers. In fact, Leopards haven’t beaten them in twelve consecutive league matches.

When Tusker FC was conceived, it left a bad taste in the mouth of Leopards fans of old, as they poached players from Leopards. There was a feeling that they got favoured by the corporate connection they had with Kenneth Matiba, then CEO of the Brewers getting involved in football matters. Leopards would in fact be having a 13th title if Tusker hadn’t insisted that Leopards play the most important fixture of 1972 even with their dependable players away.

The league which was played with a semi final and final format saw Leopards lose 1-0 to Tusker on 29th November 1972 in circumstances that triggered the displeasure of the Leopards so much that two years later, they boycotted the entire League!

But that was then. The here and now sees Tusker walking into this fixture in a town renowned for its tusks on the back of a disappointing 2-2 draw with this season’s strugglers Mat U. Leopards on the other hand are scoring for fun having an average of 2.00 goals per game and their own ‘Pichichi’ competition featuring Victor Ochieng, Allan Wanga and Mike Baraza at the top with four goals each whilst Jonas Nahimana and Jimmy Bageya breath down on them with three. Bageya also tops the assists charts.

If Leopards beat Tusker, they would have not only conquered all from every clime and coast, but they will head to Naivasha the following weekend knowing that the chant “Sisi AFC, nifwe Ingwe, tunafagia timu zote tunapata!” finally has a true ring to it.

The only people who could stop them this weekend are the likes of Joseph Shikokoti who has been rock solid and … tall but Victor Ochieng showed last weekend that height is nothing but some digits and a comma. Paul Were is always a moment away from winning a penalty with his pace but Patrick Matasi has saved a couple this season with his vision.

Leopards have a great chance to repeat what their predecessors did last in 1998 and in football as in life, nothing stays forever. After all, as they say in the casinos at the coast  - you never know! Catch the action from the stands at Mbaraki or from the comfort of your couch or from bugging those in either places. It is the biggest clash of the weekend and you just don’t wanna miss it!
Posted by Ingwe Fan at 7:47 PM