The unbeaten have been beaten! Leopards lost 0-2 to Tusker at Mbaraki in Mombasa when they scored two own goals. 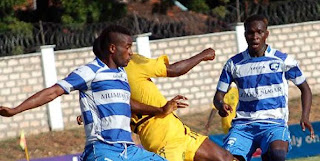 AFC Leopards remarkable 23-match unbeaten run shuddered to halt at their unfamiliar “home” ground of Mombasa in the hands of champions Tusker as Ulinzi Stars edged out Gor Mahia in Nakuru.

League leaders AFC Leopards suffered their first Kenya Premier League (KPL) defeat when Tusker deservedly beat them 2-0 at Mbaraki Sports Club in Mombasa.
Leopards’ supporters, who expected their team to register their first league win against Tusker since 1998, left disappointed after their team was outplayed.
However, Leopards made a good start and could have taken the lead in the fourth minute when Allan Wanga sent a powerful drive that hit the side netting with supporters jumping for jubilation thinking it was a goal.
Four minutes later, it was Tusker’s turn to miss the target as Joseph Shikokoti free kick went wide.
In the 16th minute, Kenneth Wendo and Paul Were combined well but Joseph Emeka who had only the goalkeeper at his mercy sent a slow shot and a grateful Patrick Matasi collected.
In the second half, Tusker continued to dominate and it was no surprise when they took the lead in the 50th minute.

A corner by Peter Opiyo found Brian Mandela who sent a header that defender Jonas Nahimana deflected into his own net.
Tusker ensure victory in the 83rd minute. A thrown in by substitute Luke Ochieng saw Leopards’ Matasia sending the ball into his own net in futile attempt to keep the ball out. 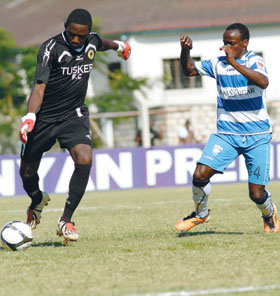 Despite the defeat, Leopards are perched on top with 26 points, but Sofapaka are in good position to trim the gap to three points should they win Sunday’s match against Thika United in Thika.

The Ingwe side should thank their goalkeeper Patrick Matasi, who worked overtime to contain the marauding Tusker striking force marshaled by Paul Were and Joseph Emeka.

After scoreless draw, Tusker were awarded a corner kick, which was taken by Peter Opiyo before it was well connected by Brian Mandela. Jonas Nahimana of AFC Leopards deflected it in an attempt to clear it in the 57th minute for the first goal.

Tusker put the icing on the cake with the second goal, courtesy of Ochieng’ Luke, whose throw-in was pushed into the net by keeper Matasi.

IT was a big mistake by AFC Leopards. They took Tusker all the way to play in Mombasa but it was Leopards who looked completely out of place, or at sea, to be humbled with a 2-0 defeat by the Brewers who looked at home at the Kenya Ports Authority [KPA] Sports Club, Mbaraki.

It was to be Leopards’ first defeat of the season, their position at the top of the Kenyan Premier League table being cut to four points by second-placed Tusker, the defending champions.

After big defender Brian Mandela, good as usual in the box, scrambled in a loose ball between legs from a 58th minute Tusker corner, the wind appeared to have been knocked out of AFC Leopards.

They had looked gullible. Under normal Coastal weather that usually causes untested upcountry visitors some problems, the toll was evident in the gait of Leopards’ players, a collection of mainly upcountry men who have never stayed even for a few hours in places lower than 5,000 ft above Mombasa’s sea level.

Indeed the face of Leopards Kenya defender Eric Masika, drenched in sweat throughout and clearly bothered by the sun glare, was the gloomy picture of discomfort among Leopards.

By the time Jimmy Bagaye, the normally speedy winger, tired as a dog, was being replaced with Brian Masiolo in the 70th minute, the Kampala [Uganda] man was wondering what a distressing place Mombasa was.

Yet Leopards, had chosen to take this their home fixture to Mombasa, ostensibly to reap the maximum gain. The complete opposite happened. It appeared that Tusker, the ever present team in Kenya’s top-flight football have picked up knowledge about Mombasa and adaptability, all the years they have travelled there to play Coast opposition.

After Mandela’s goal, many heads down, panic and defeat written all over, Leopards were a sorry sight.

Masiolo, Laurent Tumba [for Allan Wanga] and Oscar Kadenge [for Bernard Mang’oli] were thrown in but they could do nothing about a midfield lost cause where Peter Opiyo and Jerry Santos had imprinted Tusker’s complete dominance.

Substitutes Frederick Onyango and Luke Ochieng’ just added to Tusker’s strength and it was to be Leopards’ first nightmare since the season began, an unbeaten streak going back to July last year.

In the opening minutes, some opportunities for Leopards were to materialise before the game started running away from them. Bageya ran up at the Tusker defense and earned a free kick off the Brewers’ skipper Joseph Shikokoti. Wanga’s hard shot just missed by inches.

Tusker goalie Boniface Oluoch saved twice from Bageya before Wanga set up Victor Ochieng’ who was judged marginally offside. Then Tusker began the charge, the running of the Kenyan winger Paul Were proving unsettling to the Leopards’ backline. Were’s first major threat was squaring to Nigerian Joseph Emeka who was in a good position in the box but could not capitalise.

Emeka and top-of-the-attack man Kenneth Wendo were then to test Leopards ‘keeper Patrick Matasi. But most dangerous was midfield man Opiyo who just lost his footing on the half hour while about to pounce on a clear Tusker chance.

Tusker coach Sammy Omollo showed how adept he is in reading the game when he brought more strength from the bench immediately he noticed someone [Frederick Onyango] could do better than Emeka; the change coming with 10 minutes left in the first period.

From then on nothing could rattle the Brewers. After taking the lead, Tusker could have stretched it with an Opiyo free kick; curved well but flying just over Matasi. Then Wendo missed with a header.

Even though Tumba and Masiolo brought in some fight for Leopards that a withered Bagaye and an apparent struggling-with-injury Wanga could not, Tusker were just too comfortable. Leopards’ fate was completely sealed when Luke Ochieng’s long throw in the 83rd minute bamboozled a crowded box and Matasi could not hold the ball as it flew into the net.

Sammy Omollo’s boys capitalized on the Leopards’ defensive lapses to halt their cinderella run. After a barren first half, Brian Mandela tapped home an easy goal from a corner kick in the 58th minute to put the defending champions in the driving seat.

Tusker dominated the match, outplaying AFC in the midfield with skipper Joseph Shikokoti and company keeping their lethal forward at bay. Second half substitute Luke Ochieng' doubled the score from a throw-in, beating Patrick Matasi very easily in the 82nd minute.

This becomes a third win in a row for the Brewers against Ingwe after beating them in both legs last season and also in the second leg of the 2010 season. However, Leopards are still at the peak of the table standings with 26 points, four ahead of second placed Tusker.

AFC’s unbeaten run in the Kenyan Premier League came to a halt on Saturday after they fell 2-0 to champion’s Tusker at Mbaraki Stadium in Mombasa. A deflected shot by Brian Mandela and a throw by substitute Luke Ochieng provided the goals that silenced the huge travelling AFC crowd.

The hosts had the first chance of the game when a foul by Tusker defender Joseph Shikokoti on Jimmy Bageya earned them a free kick in a promising position. Allan Wanga executed it well but the ferocious shot missed by an inch to hit the side of the net.

Tusker then got a chance after winning a free kick in the 8th minute but Shikokoti’s powerful shot went well off target.
AFC leopards then had two chances .Jimmy Bageya weaved past two tusker defenders then had a good shot that was saved by keeper Boniface Oluoch. A minute later, Allan Wanga set up Victor Ochieng who was ruled offside but still had his shot placed wide.

Tusker then createD the best chance of the game when Paul Were’s cross landed at Joseph Emeka’s legs but the Nigerian sent a feeble shot that was easily collected by keeper Matasi.

The next strike by Tusker had keeper Matasi off his line but Joseph Emeka and Ken Wendo misfired past the open net. As the game approached the half hour mark Man of the match Peter Opiyo was presented with an opportunity but he lost his footing when executing the shot.

The brewers had a good grip of the match and launched attack after attack. One such offensive in the 58th minute ended in a corner. Brian Mandela capitalized on a goal mouth melee to slot in the corner after Jonas Nahimana deflected the ball and gave keeper Matasi no chance to save.

AFC defender then fouled Paul Were to gift the visitors a free kick that Peter Opiyo curved well though it soared past Matasi. Tusker would have made it two had Ken Wendo been alert to capitalize on a failed header clearance by Eric Masika.

Ten minutes to the end Koops threw in his final dice with Oscar Kadenge coming in for Bernard Mang’oli. Pamzo responded by replacing the industrious Paul Were with Luke Ochieng.

Luke Ochieng’s first role was a throw that went past Matasi to double Tusker’s advantage in the 83rd minute.

The goal seemed to dampen AFC’s effort to search for an equalizer as Tusker had the best moves in the final minutes of the game.

Despite the loss, AFC Leopards still leads the table standings with 26points while Tusker has moved second with 22points. 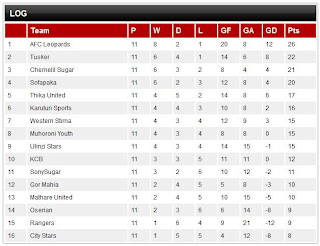