The bus is on the horizons. This was after the club successfully hosted a fund raising event in Week 9 at the Laico Regency Hotel. 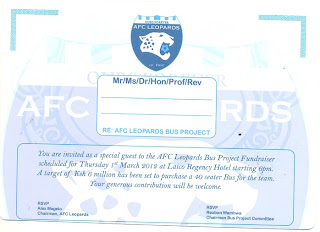 The event was dominated by appearances by the fans and was devoid of the politicians who are always taking over such functions.

Branch after branch contributed to the Bus Kitty and some of the branches were able to hit the target set of Kshs. 50,000. The complete list of the donations by the fans was posted on the official website.

The biggest donation of them all on the night belonged to Evans Kidero, the CEO of club sponsors Mumias Sugar, who gave a sum of half a million shillings in his personal capacity.

It was also announced that with the funds so far raised, the club will be on its way to paying a deposit for the delivery of the bus as the balance is sought.

Finally, there is going to be an asset to be reflected win the club's financial statements. - FN

What a week for the Leopards Number 9.

Scored a goal against Oserian and then followed it up with a goal against Togo when the national football team played the African Cup of Nations 2013 qualifier at Nyayo National Stadium. 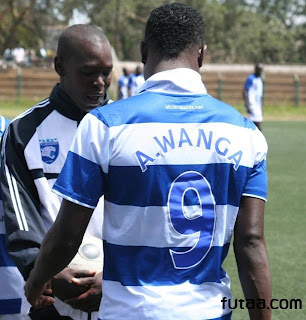 Wanga has the pedigree to be up there with the legends of Leopards and depending how the rest of the season pans out, he could be a sensational signing that finally brings the KPL back to the Den. - SE

One of the announcements made by the Chairman of the Club during the fundraiser was that the players of the club are now medically insured. The story was picked up by the Star who reported:-

Kenyan Premier League table-topping AFC Leopards have become the first top flight club in the country to put their players under a medical insurance cover. Club chairman Alex ole Magelo said the cover has been necessitated by the title sponsor Mumias Sugar Company.

This is good news that will be welcomed by the fans who have had the misfortune of seeing some key players in the past suffer injury and not get proper treatment. - VM