Picture this. Eight teams in the bowl and the event is the draw of the Top 8 competition that was launched last year. The eight are: Tusker, Ulinzi, Sofapaka, Gor Mahia, AFC Leopards, Sony Sugar, Rangers and Chemelil in the order in which they finished the league last season.

If they were to do a top versus bottom draw, runners up versus second last and so on, then Leopards would have drawn Gor Mahia. But, no! That is not the criterion being used here. It is a free for all.

So the balls are shaken and drawn and guess who gets pitted against who? Yes. Leopards draw Gor Mahia.

One of these sides will go out in the first round and not make it to the two legged semi final. There is a groan across the room. You have the feeling even the KPL mandarins are not exactly pleased because this crowd pulling tie happens so early in the competition.

That guarantees a third derby of Kenya this season and also implies that to one of these teams, once the game is over, one of them would not have had the luck of the draw. Now it is no longer just money that is at stake, but pride too. In any event, the money was never in issue since these two teams can play a kick about and attract at least 3 million Kenya Shillings in gate takings, more than the Top 8 cash prize. But, pride? It has no price. Lady luck must have played a role in conjuring this fixture and hopefully, we get treated to a first class derby by both sets of players … and their fans too. - FN

This week, the club announced that Ticket Masters, the firm that has been taking care of the Leopards ticketing maters and control of the entry to the stadium had been kicked in the gonads. In its place, Wells Fargo were appointed the ticket agents for the Leopards.

As pointed out on this blog a few weeks back, during the Leopards and Chemelil match, it was odd that it was indicated that the attendance was 2,485 fans when there were clearly more fans than that in the stadium. Perhaps there were some other failings that Tickets Masters had but shockingly, it was indicated that they had no contract with the club. The Wells Fargo deal was announced to also have the possibility of ripening into sponsorship at a later stage. At the end of the day, the club should get value for its fan’s attendances. 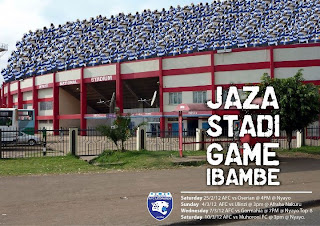 This appointment coincides with the launch of the Jaza Stadi Game Ibambe (Fill The Stadium, Let the Game Pick Up) campaign during the same week. - VB

During the week, it was announced that the ticket prices was going to be raised by 100% for the terraces and this brought an uproar form a section of fans.

The argument against was that increase of the ticket prices would keep away the returning fans. However, there are those that felt that the prices have been at Kshs. 100 and yet the fans still stayed away. 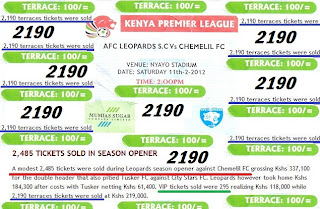 The jury is still out on what should be the correct ticket price for a fan to watch the Leopards.- SE
Posted by Ingwe Fan at 1:42 PM