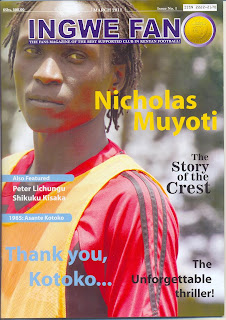 After the sad 1-0 loss to Thika United at Mumias Sugar Sports Complex, the Leopards return to action against Chemelil Sugar at the City Stadium.


Ciollins Okinyo who consistently makes predictions for the matches of KPL teams each week does not disappoint today. Wrting for Supersport, he reports:
AFC Leopards vs Chemelil Sugar (City Stadium)
Leopards’ new coach Nick Yakhama suffered his first defeat against Thika United in only his second game at the helm comes up against his former side Chemelil Sugar.
Chemelil’s new coach Edward Manoah will be handling the team in his first match in charge and will want to get off to a good start and prove that he was the best candidate for the job.
Our Prediction: 2-1
Carol Radull continues with her glory hunting ways as she makes predictions for the English Premier League and ignores the KPL fixtures making only one prediction for the Rangers match and the Super 8 tournament.
Which gives a chance for other newspapers to shine with their weekend previews. The Standard reports, through Gilbert Wandera:-
AFC Leopards coach Nick Yakhama will be a man under the spotlight when his side faces Chemelil Sugar in one of the two Kenyan Premier League (KPL) fixtures in Nairobi today.
Brought in to replace fired Robert Matano, Yakhama is yet to win over the impatient Leopards’ fans.
Last weekend was particularly bad for Yakhama as he watched his team torn apart by Thika United who won 2-0 in Mumias in what should have been a homecoming of sorts for him as Leopards have adopted the ground for some of their home ties.
Today’s fixture is particularly interesting for Yakhama, who until three weeks ago was the man in charge at Chemelil Sugar before the two parted ways due to a poor run in the league.
Perhaps the familiarity with his former club should give him an advantage on the tactical side for it is unlikely that the team could have changed their format of play so quickly.
Ahead of today’s fixture, team captain Nicholas Muyoti has promised his team will get back to their winning ways.
In a meeting with club officials the team captain admitted they did not give their best during Thika United clash, but will overcome the loss.
Of concern to Leopards is the lack of goals by Congolese striker Itubu Imbem, who has scored just once this season.
The Congolese was the club’s top scorer last season, but is yet to get the same form.
For Chemelil coach Edward Manoah, this is his second match in charge since taking over at the club two weeks ago.
He managed just a point at home after holding defending champions Ulinzi last weekend in a barren draw.
Chemelil strikers need to overcome their lack of sharpness upfront and must learn to put away every chance that comes their way. 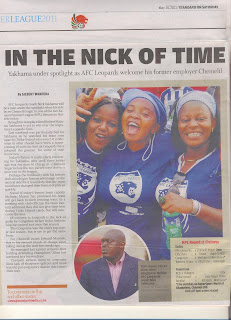 The Nation also has the report by Charles Nyende on the battle of the coaches:-
It is only 10 rounds into the Kenyan Premier League but the plot has thickened so fast writers are spoilt for choice on which narratives to pick.
Seven matches are on the programme this weekend, each providing interesting characters and intrigues.
Saturday’s clash between AFC Leopards and Chemelil Sugar at City Stadium offers one of the most interesting match-ups from a coaching perspective.

Former Leopards and Chemelil tactician Nick Yakhama, now back at the helm at Ingwe, faces up to Noah Manoah, who has also coached both teams.

Yakhama decamped from Chemelil two weeks ago to rejoin Leopards, where he had a brief stint in 2009, while Manoah coached Chemelil in 2003 and Leopards in 2009.

The interesting bit, however, is that it was Yakhama who replaced Manoah at Leopards in 2009, just as the reverse has happened on the Chemelil job with Manoah taking over from Yakhama.

The loyalty of the two coaches will be to their current employers but, from their standpoint, neither would want to lose to his former club.

“I hold no grudge against them (Chemelil) and we parted ways amicably,” Yakhama said yesterday. “Manoah is a friend of mine and we even talked yesterday (Thursday).

“I will want to win because it will be very special for me; very sweet to beat the club I was only recently coaching.”

Manoah preferred not to state his true desire, only saying he was not looking at the past. He added that he would have preferred to play his first match in charge at home rather than before an anticipated partisan Leopards crowd at City.

“I will worry a bit about their 12 players but we are working on it on the pitch where it will be 11 versus 11,” he said.

Leopards will be looking to rebound from their 2-0 ‘home’ loss to Thika United in Mumias last Sunday.

The former giants are sweating over the injury of reliable utility man Martin Imbalabala and Congolese imports Laurent Tumba and Hugo Nzoka, who are yet to resolve matters regarding their stay in the country. 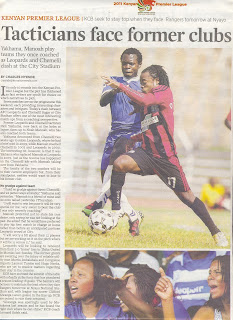 KenyanFootie has this report by Wilson Mathu:
The new AFC Leopards coach Nick Yakhama says that he is confident of winning today’s game against his former club Chemelil Sugar.
The coach who had a mixed result in the first games with the Leopards said that the players had been adequately prepared for the game today.
The outspoken coach said that having been with the millers gave him a good opportunity to snatch the win since he knows where it hurts most.
He was speaking to the media during the team’s last day preparations ahead of their Saturday 14th May clash with Chemelil at the Nyayo National Stadium.
-I have been there as a coach so I will use what I know to punish them come match day, said the tactician. He was relived off his duties at Chemelil  in unclear circumstances related to the team’s poor run in the Kenya Premier League this season.
The coach said that coaching Leopards was a great opportunity that any coach would love to have and promised the best for the fans. This is not the first time he will be here as he will be remembered for saving Ingwe from relegations two seasons ago.
This will be the first game that he will be playing against the club he left only weeks ago. In the last two games he has been at leopards, he has won 2-0 against Bandari and lost with the same margin to Thika last weekend.
Posted by Ingwe Fan at 12:29 PM