Ingwe lost 0-2 at 'home' to Thika United.
MichezoAfrika has this report by John Munene:-
Nick Yakhama’s honey moon as AFC leopards coach was short-lived after his boys failed to live up to expectations when they fell 0-2 to visiting Thika United. The one sided match played at AFC Leopards ’s backyard-Mumias Complex-was a nightmare for the partisan crowd who withstood the afternoon showers to witness their team being ripped apart as Yakhama’s dream come back to his soccer spiritual home failed to end positively.

Thika United’s intent was clear from kick off with Moses Arita being the first to fire a shot that was well saved by keeper Bernard Tiema. AFC’s Ramadhan Shaban later fired wide after Nicholas Muyoti’s header redirected the ball into play from an Abraham Cokie corner.

The Brookside boys then took over the midfield with their offensive troops consistently applying pressure to the frail AFC defense. Custodian Tiema was forced to make two successive brilliant saves to deny Arita and Kepha Aswani while defender John Amboka deflected another goal bound shot out for a corner.

Midway through the first half, the skies opened with the light showers disrupting the rhythmic flow thus ensuring both teams went for the half time break still deadlocked.

The second half clearly belonged to Thika United as AFC were left chasing the shadows. Moses Arita missed an easy tap in the 52nd minute but three minutes later he powered past three Ingwe defenders then managed a final shot between the legs to the far right that a blocked Tiema could not stop to give his team the advantage. 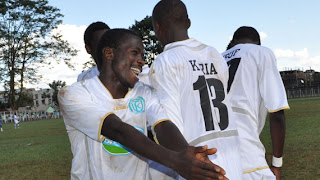 AFC Leopards then initiated one of their best moves with Paul Odhiambo working hard to lob the ball to Emmanuel Tostao from the flanks. Tostao had an easy tap but the first assistant ruled it off for an offside much to the disgust of the fans.

A few ugly scenes from the fans forced the center referee to consult with his linesmen but the match proceeded on.

Former K’Ogalo hero Peter “Pinches” Opiyo then set up Kepha Aswani in the 74th minute but the latter shot wide. Francis Kahata then had his chance with a strong left foot volley but Tiema again came to the rescue of the skinned leopard.

With five minutes to go, Coach Juma Abdalla then introduced Kennedy Otieno for the man-of-the-match Arita and this move paid dividends minutes later as Otieno powered a 25 yard left foot shot with a minute to go that sealed the three points and the home team’s fate.

An elated Juma Abddalla thanked his boy’s good team work for the win and added that
“Thika United deserved that performance. We played well and am happy we collected maximum away points”

A dejected Nick Yakhama claimed some fouls on his players went unnoticed but promised a comeback in the next match.

AFC Leopards 0 Thika United 2
AFC Leopards had no reply to Thika United’s energetic presence at Mumias Sugar Company’s Sports Complex that produced threatening attacks throughout the match.
Moses Arita [55th minute] and Kennedy Otieno [88th] concluded the miserable time for Leopards’ supporters and their new coach Nick Yakhama who had hoped for far much better.
Thika had had many great opportunities to score, the best falling to Francis Chege, before Arita came on off the bench for the visitors’ lead. Otieno also came off the bench to score after a scorching solo run on the left flank. He fired to the near post past a bewildered Barnabas Tiema in the Leopards’ goal.
Leopards, a team that had not lost to Thika United in five matches, looked quite poor on the day. The supporters sensed that and looking for a scape goat directed verbal abuse on the centre referee.
A clearly off-side Emmanuel Tostao converted a cross past Thika ‘keeper David Okello and when the Leopards’ rookie was flagged off, the supporters did not like it.
Supersport has a report by James Wokabi:-
Second half goals by Moses Arita and Kennedy Otieno handed coach Nick Yakhama his first defeat since he took over as AFC Leopards lost 2-0 to Thika United in Mumias on Sunday.

Arita scored on 55 minutes before Otieno stepped off the bench to seal the points with a powerful shot two minutes from time to give Thika its first win over Leopards in five matches.
Playing in Mumias as part of its obligations to its sponsor, leopards were decidedly second best with Moses Arita denied by goalkeeper Barnabas Tiema early on.
Their only effort at goal in the first half was wasted by Ramadhan Shaban who blazed over after an Emmanuel Tostao knock down.
Arita then put Kepha Aswani through on goal but Tiema pulled off a stunning save with his feet and the Attacking midfielder fired the rebound over the bar.
Thika continued their dominance in the second half with Peter Opiyo shooting wide on 47 minutes after advancing into the box.
Yusuf Onyango then made ground down the left on 52 minutes but Arita was unable to convert his inviting low cross.
The goal came three minutes later and Onyango was again heavily involving finding Arita with a long cross. The striker beat his marker and then escaped the attentions of Dimonde Selenga before squeezing the ball home at the far post.
Content to sit and play on the counter Thika continued to create the better chances with Tiema saving Michael Bodo’s shot on 57 minutes with Arita’s follow up deflected out for a corner.
Leopards thought they had equalised on the hour mark but Tostao’s goal was ruled out for offside.
Selenga’s shot on the turn was gathered by David Okello at the second attempt on 62 minutes.
The winners threatened again 12 minutes from time with Francis Kahata hitting the side netting. The youngster had another go on 84 minutes but Tiema tipped the ball out for a corner.
They sealed the points two minutes from time when Otieno sped away down the left before unleashing ferocious shot that beat Tiema at his near post.
The KPL standings as per the KPL website:-
Posted by Ingwe Fan at 9:28 AM