AFC Leopards have yet to win an opening day fixture in the Kenyan Premier League since they came back to top flight football. Yesterday's game ended in a draw just like year's opening day game against Chemelil only that this time it wasn't 0-0 but 1-1.


The opening day of the 2012 Tusker Premier League saw Chemelil Sugar frustrate AFC Leopards and it has happened again this year.

Jared Omwenga Obwoge and Noah Abich exchanged equal blows to see their first match of the 2013 Premier League end in a 1-1 draw at the Moi Sports Centre Kasarani, Sunday 24 February 2013.

Omwenga scored the opening goal of the game midway through the first half and it looked like it would be the match winner until Abich converted from the penalty spot three minutes from time after Paul Were was fouled in the area.

Mike Baraza's sending off in the second half added to the woe for Tom Olaba's men who huffed and puffed all day.

Leopards gave debuts to Patilla Omoto, Martin Musalia and Anthony Kimani but it was not to be a happy day for the men in blue as the well drilled Chemelil proved hard to break down.

Leopards tried hard to get back in the game after conceding but were ultimately messed up by Baraza's red card for a second bookable offence, the second of which was in controversial circumstances, though they will be thankful to take a point home in the circumstances.

With the draw, Chemelil can enjoy a point no one expected them to collect while for Leopards, they will know they have to improve to have any chance of landing the Premier League title.
Nation wrote:- 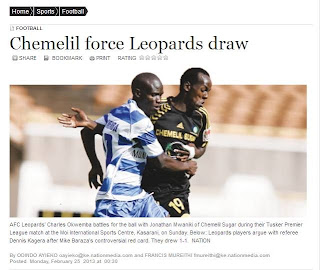 Referee James Kagera returned from a six-month suspension but should have stayed even longer in the cold as he made a farce of the Kenyan Premier League game between AFC Leopards and Chemelil Sugar which ended in a one all draw at the Moi International Sports Centre, Kasarani.

At City Stadium Kenya Commercial Bank hammered City Stars 4-0 as Bandari got a rude welcome falling by a solitary goal to Ulinzi Stars.

Kagera was suspended last season for awarding AFC Leopards a dubious penalty against City Stars and he did exactly that again yesterday, awarding Leopards what looked a questionable penalty as Ingwe trailed 0-1 to the sugar millers.

Maybe, Kagera was trying to mend fences with AFC Leopards fans who had hurled all sorts of missiles onto the pitch minutes earlier after he controversially red-carded AFC Leopards striker Mike Baraza.

Baraza had been ruled offside, but this was rather questionable as he rushed to a back pass from a Chemelil defender.

When he questioned the linesman why he had been penalized for the off side, Kagera flushed a yellow card at him.

Moments later the referee showed him the red card and all hell broke loose as Leopards fans started hurling missiles on to the pitch. The game was halted for close to 20 minutes.
Game wise though, there was nothing to write home about and AFC Leopards will have to dig deep to sort out their midfield and striking inadequacies. Partilla Omoto, a teenager brought from Kariobangi Sharks showed some flashes of brilliance but his inexperience was evident. Same to Noah Wafula, who came in after the break.

Leopards’ defence was solid, Noah Abich, Anthony Kimani, Idrissa Rajab and Eric Masika covering goalkeeper Martin Musalia very well but the midfield was totally out of form until the introduction of Charles Okwemba.

Jared Omwenga gave Chemelil an early lead when he beat the AFC Leopards defence to put the ball behind Musalia.

AFC Leopards, third last season, struggled to pick up. They ended the first half without a shot on goal.

Leopards moment though came in late in the second half when Kagera adjudged Paul Were to have been upended in the box when the player looked to have dived. 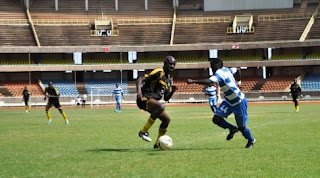 AFC Leopards and home team Chemelil FC played to a 1-1 draw in their opening match of the 2013 Kenya Premier League seasom at Kasarani Stadium on Sunday afternoon.

AFC coach Tom Olaba paraded four of his new signings in the starting team starting Michael Musalia in goal, Anthony Kimani and Noah Abich in defense while Patilla Omotto got the nod in  midfield alongside Bernard Mang’oli and Martin Imbalambala.

Chemelil started proceedings powerfully and were rewarded when Jared Obwoge sank in past Musalia in the 13th minute.

AFC who looked uncoordinated in midfield play attempted a comeback in the remaining half hour of the first half raiding Chemelil goal area frequently.Paul Were’s runs on the left flank frequently tortured Chemelil defense line but there was always poor combination and lack of perfect execution in the final touch inside the box.

In the 37th minute, Paul Were’s cut into the box was cut out as he attempted to deliver a 45 home pass to Victor Ochieng but the serve was too weak and was easily cleared.

Two minutes after the start of the second half, Martin Musalia came to the rescue of AFC Leopards saving with his left foot a goal bound shot after Obwoge capitalized on a defensive blunder. Alone with the keeper, the striker failed to burrow the ball beyond Musalia.

Olaba made a double substitution bringing out Victor Ochieng for and Patilla Omotto and introduced Charles  Okwemba in midfield.

New substitute Wafula added immediate power in the Ingwe attack line making a good run on the flanks to deliver to Bernard Mang’oli whose final shot was blocked.

Trouble started twelve minutes after restart when Mike Baraza was ruled offside. He protested the ruling and was given matching orders after landing a second yellow. This sparked protests from the AFC Leopards fans forcing temporary stoppage of  the match. The fans pelted water bottles into the stadium  but after appeals from the AFC Leopards’ players, calm restored and the match continued.

A good combination between new boy Wafula and Were almost yielded an equalizer but the latter’s last touch failed to tap the ball home.

New signing Noah Abich leveled from the spot  in the dying minutes to salvage  a point for AFC leopards.Paul Were had dribbled his way inside the box only to be fouled thus occasioning a clear penalty.

Chemelil Sugar coach Mike Mururi lauded the perfomance of his team afrter the match but blamed the match official for awarding AFC the penalty.

"It was a poor decision to award the penalty. That was wrong officiating. However I thank my boys for a good match. We were the better side." He said.

Before the match, Leopards fan Lugendo had said: