Leopards beat Mathare United 4-2 to go top of the league for 24 hours before being dislodged by a rampant Gor Mahia who beat Muhoroni Youth 4-0 as Tusker also eased into second place with a 2-0 victory over Western Stima. 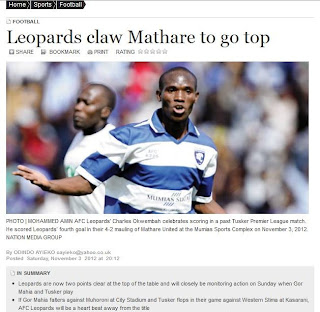 AFC Leopards stormed back to the top of the Tusker Premier League on Saturday with an emphatic 4-2 hammering of Mathare United at Mumias Sports Complex.

Leopards are now two points clear at the top of the table and will closely be monitoring action on Sunday when Gor Mahia and Tusker play.

If Gor Mahia falters against Muhoroni at City Stadium and Tusker flops in their game against Western Stima at Kasarani, AFC Leopards will be a heart beat away from the title.

It was a crucial game for Leopards; a slip would have mathematically locked them out of the race but when Paul Were scored the third goal to make the scores 3-2 with 15 minutes remaining, they looked to be cruising to the top.

It was a high scoring game and both teams did not fear to venture upfront for goals. As early as the 13th minute Mike Baraza beat Mathare’s offside trap to release a screaming left shot to the roof of the net.

But even before Leopards could finish celebrating, Jesse Were capitalized on some slack Erick Masika defending to latch onto a loose ball to level the scores.


Leopards were not going to relent knowing very well their title ambitions depended on this game. Their next attack was from a good passing move between Victor Ochieng and Bernard Mang’oli before the latter rifled in a ground shot from the edge of the box.

Two-one it was until the breather but both sides had given so much.

After a see-saw battle in midfield for most of the second half, Mathare levelled the scores in the 69th minute. Leopards had committed most of their players upfront as Charles Okwemba took a corner which was collected by Mathare players who surged ahead in sixes outnumbering the Leopards rear.

At this point Leopards looked to be struggling and the entire Mumias Complex was dead silent under persistent rain.

But Jan Koops still had an ace up his sleeves. He pulled out Victor Ochieng who looked rather tired and brought in Allan Wanga in the 72nd minute. Wanga’s first touch nearly resulted in a goal.

Wanga was to play provider in the 75th minute beating Anthony Kimani to cut back for Were who simply tapped the ball into the net.

Leopards were not done yet. Baraza, who had a huge game took up responsibilities for a free kick deep in Mathare’s territory.

He floated a perfect cross into the box and Charles Okwemba, incidentally the smallest man in the box, timed his jump to head home Leopards fourth goal.

The eleven game unbeaten run by Mathare United came to a crashing halt with a 4 – 2 loss to AFC Leopards at the Mumias Sports Complex in the Tusker Premier League (TPL) clash on Saturday 3 November.

AFC Leopards went ahead after 13 minutes with a scorcher for a goal after nice work by Paul Were released Mike Baraza who beat the Mathare United defence and unleashed a left footer to the roof of the net from a tight angle.

Even before the Isikuti dancers were through with their celebrations, AFC Leopards were under attack. Eric Masika slid in to clear but his touch set up Jesse Were who fired feebly past Patrick Matasi for the equaliser.

On 18 minutes, however, the home side was to surge forward and the very impressive Bernard Mangoli latched onto a pass from the right to beat martin Musalia with a low shot from the edge of the box. The goal was his second in the league against the Slum Boys.

AFC Leopards should have got the third goal on 44 minutes but Mike Baraza’s goal bound shot was cleared by Anthony Kimani after beating the offside trap and the advancing Martin Musalia too as the home team went to the break with the slim lead.

Mike Baraza went close two minutes after the restart with a free kick after John Odhiambo’s foul on Bernard Mangoli but his low shot was parried clear for a corner by Musalia.

On the hour mark, Victor Ochieng should have done better when he latched on to a loose ball after a miscommunication in the Mathare United defence but he lost his footing with just the keeper to beat.

The misses by the home team spurred Mathare on and on 65 minutes the Slum Boys broke clear with a counter attack after defending a corner well and Joseph Mwangi crossed the ball for Francis Ouma to beat Matasi at the far post with a header to the net’s roof.

Wanga then had an immediate impact, beating John Odhiambo to square the ball for Paul Were in the six yard box. Were’s calm shot gave Musalia no chance.

Charles Okwemba put the icing on the cake with an 89th minute goal from a header after connecting well with a Mike Baraza free kick from the right flank.

The win takes AFC Leopards on top of the 16 team log, for 24 hours at least, before Gor Mahia and Tusker take to the field on Sunday. Ingwe have 57 points so far. Mathare on the other hand remains seventh with 38 points.

AFC Leopards on Saturday afternoon took control of the Kenya Premier League log after a spirited 4-2 win against Mathare United in an entertaining six goal thriller played at the Mumias Sports Complex. AFC Leopards is now perched at the helm of the KPL log with 57 points two ahead of Gor Mahia who play Muhoroni Youth on Sunday  and three ahead of defending champions Tusker who have a date with giant killers Western Stima.

Ingwe took the lead through Mike Barasa in the 14th minute beating Martin Musalia from a close range tight angle left foot shot but before the Ingwe defense line could settle back in their formation from their celebration, Jesse Were pounced on a loose ball in the box to rattle Matasi for the leveler just seconds after restart.

Jesse Were was back in the 22nd minute with a powerful shot from the edge but Matasi was on point this time to easily collect the attempt.

In the 36th minute Paul Were’s contribution on the left flank delivered a corner for Ingwe and the attempted lob in was cleared before it could create damage. The clearance landed on Were again who brought a cross back to the danger area but the referee ruled off side.

In the 40th minute, Victor Ochieng was served with a clever ball deep from the midfield by Mang’oli but his run was marginally judged offside though his final chip above Musalia in goal had been stopped by the upright.

Mike Barasa in the 43rd minute broke the fragile Mathare United offside trap with a good run but his final shot on target was cleared just before it crossed the line by captain Anthony Kimani for a non effective corner.

Mathare United had the final piece of action in the first half with a 45th minute free kick at the edge of the box that was fired above for Ingwe to take a 2-1 lead to the break.
At the start of the second half, Bernard Mangoli’s drive was clipped for a free kick taken by Mike Baraza but Musalia was equal to the task parrying away the goal bound shot to safety.

Mathare had moments of scare in the 63rd minute when a defensive blunder gifted Victor Ochieng an easy ball but the latter was sluggish in his reaction failing to finish off what looked like an open chance.

In the 66th minute, Mathare United produced a spectacular counter attack, capitalizing on a weak cross by Mang’oli to catch the overlapped defense line off guard. Mathare attacked like a swarm of bees with five players sprinting in sync deep from their half and the final ball found Francis Ouma’s head on the blind side to beat Matasi with a roof top goal.

Allan Wanga then came in for Victor Ochieng in the 71st minute and he immediately made the difference for Ingwe as three minutes after coming on, he beat the Mathare United defense line to serve a proper square ball for Paul Were to sink past Musalia for a 3-2 lead.

Charles Okwemba creamed Ingwe’s cake with a 4th goal in the 89th minute  heading past Musalia from a Mike Baraza free kick. 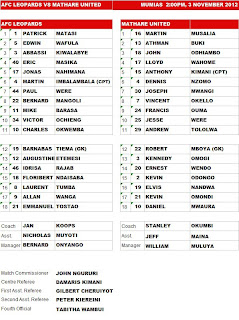 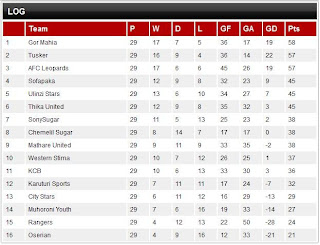