Sofapaka coach Salim Ali is confident of victory when they take on AFC Leopards in a mouth watering clash on Wednesday evening live on SuperSport 9East.

The league leaders are on 29 points, three ahead of Leopards and a win will see them end the first leg top of the log.

Ali believes that the match will tense and closely fought, "Our match against AFC Leopards will be very tough with alot of pressure but I believe we have the confidence and we want to maintain our perfect run that we have had this season and finish."

Sofapaka has most of its key players fit with Osborne Monday and Simon Mburu the only absentees.

"All my players are key to our good performances so far and I believe we have all it takes to beat AFC Leopards in what I suppose will be an exciting clash that everyone must watch," a confident Ali told SuperSport.com.

The record between the two is fairly even with the 2009 champions having won three while Leopards have won twice in their last six meetings. 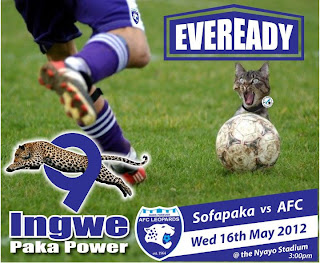 Carol Radull of The Star predicts a Sofapaka win.

KPL Pick of the Week

As I write this, Sofapaka are one point behind (now ahead) AFC Leopards in the standings but AFC play Sony today (they didn't); while Sofapaka have a tie against Muhoroni Youth. So the points may have changed come Wednesday. Infact come Wednesday Sofapaka may be top already, who knows. Wednesday is the last match for the two teams to play before the midway break and I know Salim Ali wants to go into that break on top. AFC Leopards’ slide has been sad and I just wish the warring management can sort themselves out; and that coach Jan Koops can find a rotation of players that works; so that fatigued players can get some rest. I think Ingwe’s poor form is a combination of fatigue and lack of concentration and it’s unfortunate but it’s football. I actually see Batoto ba Mungu going top before the break, but AFC coming back strong after the June rest.

Coach Salim Ali says the AFC Leopards match comes at a very difficult time for the players as they are required to play many difficult games within a short period of time, which he admits is not good for any athlete anywhere in the world.

However he says the team is well prepared, motivated and raring to go as they face the third placed side, which he says are the favourites going into the game and are also buoyed by their strength in many departments.

However, Salim says he has a good strategy to down them and expects a good turn of events because Sofapaka is going into the last game of the first leg on a fine run of form in the recent times.

“The match comes at a hard time for the players because we have had many games in a short time; we are playing three games in ten days which is not logical to even the best athletes in the world. However, we have no option but to play and we have also trained well for them.

“They are favourites going into the game because the last encounter between the teams they won and they are also a very strong side but we are also expecting a good result and we have a good plan for that. We have also had a fine run of form lately and since it is our last game of the first leg I am sure we will deliver”, he said.

The big cat  fight is on this evening. Sofapaka FC will play host to AFC Leopards at Nyayo Stadium on Wednesday May 16  from 7pm .The match will broadcast  live on Supersport.

Sofapaka will be fighting to maintain their top position in the league while AFC Leopards seeks to reclaim their spot. Sofapaka has 29 points while AFC has 27 points but has a   match at hand.

On head to head record, Sofapaka stands an inch taller with three wins, one draw and a loss in all their six league games since Batoto Ba Mungu first stepped into the Kenyan Premier League.

AFC leopards will be missing Erick Masika and Allan Wanga who are both out on injury. Koops has preferred to start with Ugandan Jimmy Bageya on the bench.

On his part coach Salim Ali has picked Anthony Kimani who has been used as a sub recently to start this evening. Hot property Humprey Mieno and John Baraza are expected to give AFC a hard time but Koops can rest his faith on top poacher Mike Barasa.

Tickets for the match are available at Nyayo Stadium at a cost of Ksh 500 for VIP and 200 for the terraces. ther Ticket Masters outlets will also be selling the much sought entry ticket.