The club secretariat has announced they are yet to finalise with the release of Evalistus Shamala, John Amboko, Masiolo, Aluvisia and Tostao with their former clubs.

However, suspended secretary General Robert Asembo termed the new developments as null and void as the term of office for those who made the changes had expired last month.He said unless elections are held in a day to be determined by the Milimani Commercial court on Friday afternoon,nobody should issue any directive in the club.

The 26 players named on Monday by the club secretariat comprise of; Goalkeepers-Brian Tiema, Patrick Matasi. 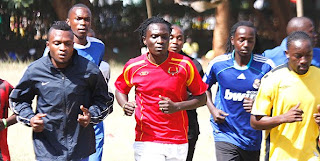 AFC Leopards have appointed a Belgian coach as the executive made an overhaul of the technical bench.

Bhollen will be deputised by Eliud Omukuywa while former Mumias Sugar FC marksman Bernard Onyango has been appointed as the new team manager to be assisted by Haggai Malenya.

Other changes announced by the club acting secretary general Catherine Omanyo indicate that Patrick Madahane Ngusale will be the team doctor.

Robert Matano survived the axe wielded by the Leopards administration on the technical bench to maintain his position of the Technical Director.

Those who have been “kicked” out include Gilbert Selebwa who has been the logistics manager,Tony Lidonde (Team Manager) and assistant coach Daniel 'Dino” Kitavi.

Speaking at the teams training ground at Nairobi's Kabete Technical,Ochiel said the changes made are final and binding and called upon the club supporters to rally behind the newly elected technical bench.

However, suspended club secretary general Robert Asembo dismissed the new changes terming them as null and void.He said the new developments are not binding since the term of office for those who made the announcement ended last month.

Asembo said unless elections are conducted, the changes cannot hold water and called upon the Leopards soccer fraternity to ignore.

''By making those announcements, Asembo added,it means elections for the club have lost value and meaning. Those changes are not binding since those who made the announcement on Monday are not supposed to be in office in the first place since elections are yet to be conducted. They are there illegally. What they have done is null and void and I do appeal to club members to ignore them”

Ochiel thanked sponsors Mumias Sugar company for their support adding that they have remained focussed and steadfast in their unwavering support.

The chairman assured club members that the team will win the Kenya Premier League(KPL) title this year and pleaded with club members to support the team and the playing unit. He said the team to feature for the club this season will be named on Tuesday.

According to analyst, the new changes are set to create further split in the team.Over 100 players who are on trials were spotted today at the Kabete Technical ground.

Bollen, who worked with Jean Marie and Juliana (JMJ) Academy, will be assisted by Eliud Omukuywa, an uncompromising defender in days at the defunct Kakamega outfit Motcom FC.

Robert Matano retains his post as a team manager, while MacDonald Mariga’s father, Noah Wanyama is the club’s technical advisor.

The Brazil-trained Belgian was on Monday unveiled in absentia, as the new recruits trained under Matano.

“We want to have a formidable side this season. In the end of the transfer window, we want to have a team of 26 senior players and four from the junior team,” said Matano.

Last season, several players from JMJ Academy were been loaned Leopards for one year, making the academy the centre for talent.

Bernard Onyango has replaced Tony Lidonde as the club’s team manager and will be assisted by Haggai Malenya.

And from the Leopards office