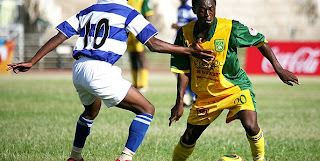 Sorry, but this below is from the KPL website so may not be very objective

Mathare won 1-0, firmly returning to the helm occupied by the main contenders for this year's title, but rather than coming off as wounded animals licking their wounds, Leopards held their heads high ready to pounce another day.

The bottom-placed Leopards only fell to a 48th minute penalty on a day they matched the champions ball for ball.

Signs of the remnants of the uproar about Leopards disobeying the Premiership's secretariat's arrangement that the match be played before television cameras at the International Sports Centre, Kasarani on Sunday was not even evident . The teams played like they knew that nothing else mattered but proving oneself on the pitch.

Anthony Khadudu notched his third goal in three matches by scoring the important winner for the champions shortly after the change of ends.

He faced Roy Syamba and David Ochieng' and his ball control left Ochieng' only the option of tripping him as he entered the box.

Khadudu stepped up to score, adding to his last week's brace in the 2-1 victory over Western Stima at the same venue.

If Mathare have at last found a goal getter in the diminutive 23-year-old midfielder, their season's import from Sony Sugar, Kenya trialist John Onami, could be shaping up as the much-sought after striker.

As Leopards stayed very much in the hunt for an equaliser, Onami was the target for Mathare passes in counter raids. His positioning and execution looked good and he came agonisingly close with two chances. His strike partner, Paul Ambembo also missed a good opportunity.

"The goals are still hard to come by." said United coach Francis Kimanzi, adding: "There are very many changes in the attack but the more we remain together I am confident that at the beginning of the second leg, we will have found our rhythm."

Leopards had just broken the duck with a season's first win against Sony Sugar last weekend but coming unstuck against Mathare United by no means sounded the death knell.

Leopards competed well enough suggesting they may have life in the Premiership which now has five matches to the halfway stage.

The club's treasurer Duncan Angode said they did not regret their decision to turn down playing at Kasarani.

"We would have had far less supporters there because it is far out of town. Here we are happy with the number that paid to watch."

But, apparently, every cloud has a silver lining and Leopards pull-out from the SuperSport "live" TV coverage will be good news for other sectors of Kenyan football.

SuperSport will now likely use the 1:00 p.m. slot on Sunday for a live-TV broadcast of a Copa Coca Cola U-17 match, preceding the Nairobi City Stars v Sofapaka match at Kasarani.

SuperSport will also likely use the same slot next Saturday, May 2 for a live-TV broadcast of the Copa Coca Cola U-17 championship final as a curtain raiser for the later KPL Mathare United v Gor Mahia match that day at Coca Cola Stadium in which Mathare United will respect the decision of KPL and yet again play their home match in the home stadium of their opponent (Gor Mahia).

So the good news is that many talented U-17 youth from around the country will now likely get a chance to feature in live-TV broadcasts in Kenya and Africa.

After the former champions declined to play at Kasarani citing lack of a home advantage, Leopards will rue their missed chances that could have seen them deny United to climb to the fifth position up from eighth.

“This is a new team and the goals are hard to come by. All the same, we are trying to remain together and I’m sure at the beginning of the second leg, we will have found our rhythm,” said Mathare United’s head coach, Francis Kimanzi.

Khadudu converted a 48th minute penalty as United got the better of a fractious start of the season.

Jaffer Gichuki’s solo effort from the left wing left Roy Syamba and David Ochieng’ for the dead, only for Ochieng’ to trip the left back in the box.

And despite a late push from Mathare in which John Onami missed two open goals and Paul Ambembo came close, it is the Leopards who look set to have more sleepless nights as the urge to break their last position continues to linger on.

Leopards had limped up to the Coca-Cola stadium having won just one of their nine previous premier league matches and now find themselves teetering on the brink with memories of their last week’s 1-0 win over Sony Sugar in Awendo start fading fast.

Yet the way Leopards started the match suggested there may be life in them yet, as they got forward with plenty of freedom and fashioned their first chance with less than two minutes on the clock.

The match, overshadowed by a tussle over the venue, saw Khadudu, who scored from the spot in Mathare’s victory against Western Stima last week, decide the match in the 55th minute when he fired his penalty past Teddy Okumba in the AFC Leopards’ goal.

Lively left back, Jaffar Gichuki made a solo run and brought down inside the box by an AFC defender and Khadudu stepped up to fire high into the right top corner.

Mathare forward, John Onami, had three chances in the first half, failing to connect with tearing crosses from the right on all occasions. Paul Ambembo forced Okumba to make a smart save in the 22nd minute as Mathare created more openings in the first period that ended goalless.